The clavicle elongated, S-shaped bone that lies horizontally between the sternum and the acromial end of the scapula. It is an important connection between the axial skeleton and the pectoral girdle.

Clavicle is a slender bone, wider medially at its sternal articulation and noticeably thinner at its lateral third.  The clavicle assumes a gentle S-shape, the medial end convex forward and the lateral end concave forward.

The shape resembles the musical symbol clavicula. It is also known as the collarbone.

The bone has following parts

The lateral end is also called acromial end and is flat from above downwards. It articulates with the acromion process of the scapula through a facet. The articular surface for the acromioclavicular joint gives attachment to the joint capsule.

The medial end is called sternal end, is quadrangular in shape. This part articulates with the clavicular notch of the manubrium sterni to form the sternoclavicular joint.  It also articulates with first costal cartilage via an extension of the articular surface.

The shaft of the collarbone can be divided into the lateral one third and the medial two thirds.

Determination of Side of Collarbone 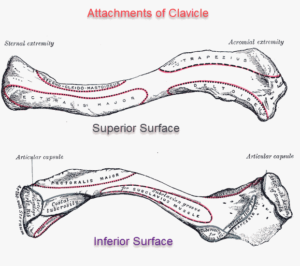 The posterior part of the capsule resists both anterior and posterior translation at the sternoclavicular joint.

This ligaments has strong bands that span the medial clavicle to the superior sternum to the contralateral clavicle. The ligament loosens with shoulder elevation and prevents downward displacement of the lateral end of the clavicle.

These strong ligaments run from the upper aspect of the first rib and adjacent aspects of the sternum to the inferior clavicle. The costoclavicular ligament stabilizes the medial clavicle against both upward and downward rotation, respectively.

From the base of the coracoid process of the scapula to the inferior aspect of the lateral clavicle are two ligaments, called trapezoid and conoid ligaments. Trapezoid ligament is lateral and attaches on a specific osseous ridge, whereas the more medial conoid inserts at the conoid tubercle. These ligaments serve the important function of suspension of the shoulder girdle from the clavicle.

The collarbone is responsible for bracing the shoulder girdle and propping it away from the sternum and thoracic cage. This allows the shoulder to reach into cross-body and internal rotation positions without medial collapse. The clavicle increases the strength of shoulder girdle movements 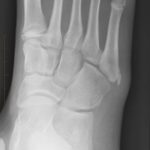 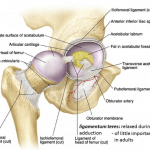 Synovial plica syndrome is referred to the group of signs and symptoms due to inflammatory changes in plica, an otherwise insignificant remnant of the synovial membranes of the knee. Synovial plicae are normal structures found in many knees. Normally, they are asymptomatic and are not associated with any painful conditions. However, with an inciting event […]

knee injuries occur following trauma or fall. The knee is a major weight-bearing joint and the knee injuries require proper management with … END_OF_DOCUMENT_TOKEN_TO_BE_REPLACED