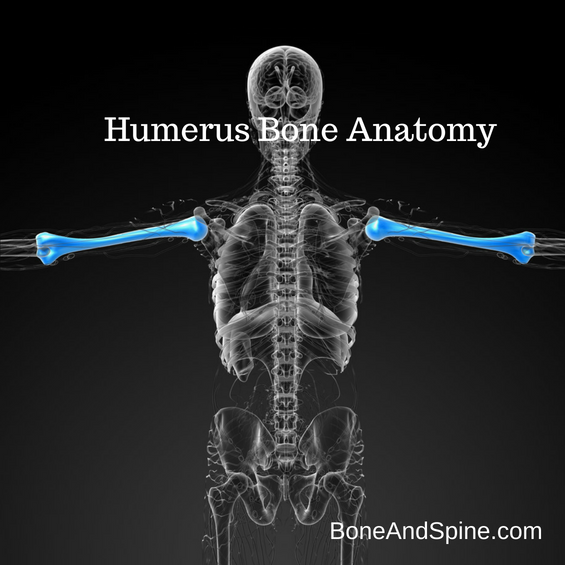 Proximally, humerus forms part of the shoulder joint whereas distally, the humerus articulates with the radius and ulna to form the elbow joint.

The humerus bone acts as an attachment site for many important muscles and ligaments.

For describing the anatomy of the humerus bone, it is divided into three parts

Head is the most proximal region of the bone. The Head is almost spherical in shape and flattens a bit where it attaches to the scapula and clavicle.

The head is directed medially, backward and upwards. It articulates with the glenoid cavity of the scapula to form the shoulder joint. The head forms about one-third of a sphere and is much larger than the glenoid cavity.

The line separating the head from the rest of the upper end is called the anatomical neck.

There are two tubercles present.

The lesser tubercle is an elevation on the anterior aspect of the upper end.

The greater tubercle is an elevation that forms the lateral part of the upper end. Its posterior aspect is marked by three impressions-upper, middle and lower.

Bicipital groove separates the lesser tubercle (medially) from the anterior part of the greater tubercle. The sulcus has medial and lateral lips that represent downward prolongations of the lesser and greater tubercles and serves for the attachment of ligaments and muscles

The line separating the upper end of the humerus from the shaft is called the surgical neck.

The shaft is rounded in the upper half and triangular in the lower half. It has three borders and three surfaces.

The lateral border is prominent only at the lower end where it forms the lateral supracondylar ridge. In the middle part, it is interrupted by the radial (spiral) groove which holds the radial nerve.

The medial lip of the intertubercular sulcus or bicipital groove continues as the medial border.  About its middle, it presents a rough strip. It is continuous below with the medial supracondylar ridge.

Anterolateral surface lies between the anterior and lateral borders. The upper half of this surface is covered by the deltoid. It is marked by a V-shaped deltoid tuberosity a little above the middle.

The anteromedial surface lies between the anterior and medial borders. Its upper one third is narrow and forms the floor of the bicipital groove. Near the medial border, at almost middle, a nutrient foramen is seen.

Between the medial and lateral borders lies the posterior surface. It is marked by an oblique ridge in the upper part and is crossed by the radial groove in the middle third.

Below the deltoid tuberosity, the humerus gradually widens, doubling its width as it approaches the elbow.

The coronoid fossa is a depression just above the anterior aspect of the trochlea. It accommodates the coronoid process of the ulna when the elbow is flexed.

The radial fossa is a depression present just above the anterior aspect of the capitulum. It accommodates the head of the radius when the elbow is flexed.

The olecranon fossa lies just above the posterior aspect of the trochlea. It accommodates the olecranon process of the ulna when the elbow is extended.

The subscapularis is inserted into the lesser tuberosity.

The greater tuberosity gives attachment to insertion of supraspinatus, infraspinatus and teres minor.

[The contents of the intertubercular sulcus are  the tendon of the long head of the biceps and its synovial sheath along with the ascending branch of the anterior circumflex humeral artery.]

The anatomical neck provides attachment to the capsular ligament of the shoulder joint except on the medial side. On the medial side, the line of attachment dips down by about a centimeter to include a small area of the shaft within the joint cavity.

The deltoid tuberosity provides insertion to the deltoid muscle.

A rough area in the middle of the medial border is for the insertion of coracobrachialis.

The brachialis arises from the lower halves of the anteromedial and anterolateral surfaces of the shaft extending in part on to the posterior aspect.

Upper two-thirds of the lateral supracondylar ridge give origin to brachioradialis whereas the lower one third gives rise to extensor carpi radialis longus.

The anteromedial surface, near the lower end of the medial supracondylar ridge, gives origin to the humeral head of pronator teres. {The other end arises from ulna on the medial side of the coronoid}

The posterior surface of the lateral epicondyle gives rise to the anconeus muscle.

The capsular of the elbow joint is attached along a line that reaches proximal to the radial and coronoid fossae, anteriorly, and on the posterior side, proximal to the olecranon fossa posteriorly.

Side Determination of Humerus Bone

There are one primary and seven secondary centers.

The center for the body appears near the middle of the diaphysis in the eighth week of fetal life and soon extends toward the extremities. This is the primary center.

At birth the humerus is ossified in nearly its whole length, only the extremities remaining cartilaginous.

Centers for the head and tubercles join by 6 years to form a single large epiphysis. This fuses with the body about the twentieth year.

The ossification centers for lower end are remembered by CRITOE. That is the order of appearance.

The timeline is as follows

The blood supply of spinal cord is mainly dependent on three vessels. These are namely anterior median longitudinal arterial trunk and a pair of posterolateral trunks. These posterolateral trunks are situated near posterior nerve rootlets. These longitudinal arterial trunks are largest in size in the cervical and lumbar regions because the demand for grey matter […]