Ankle dislocation often occurs with fractures of ankle bones especially malleolar fractures and talar fractures. A significant force is required to dislocate the ankle without the fracture. There is an inherent stability of the tibiotalar joint, therefore dislocation of the ankle joint is rarely seen without an associated fracture.

Usually, any dislocations that do occur are easily reduced by closed methods.

Dislocations of the ankle are seen more frequently in young males.

This articulates with the dome of the talus to form ankle joint.

The ankle joint is stabilized by many ligaments.

The ankle joint is designed for a balance of stability and flexibility.  Joint stability is provided by the close articulation of the talus with the tibia and fibula and mortise design.

The talus is trapezoidal in shape, with the greater width anteriorly and narrower posteriorly. As the joint moves into plantar flexion, the talus becomes narrower, resulting in a decrease in stability.

The position of plantar flexion is seen in conjunction with the supination of the foot. The foot being in a supinated position. Thus the ankle is vulnerable to inversion injury.

Associated fractures often occur with ankle dislocations. The type of ligamentous injury varies with the type of dislocation.

Neurovascular injury is the main concern. Vascular compromise may result in avascular necrosis of the talus, tissue necrosis or even gangrene.

The neural injury may result in a neural deficit, mainly sensory.

Possible risk factors that may predispose a patient to dislocation include the following: joint hyperlaxity, internal malleolar hypoplasia, peroneal muscle weakness, and a history of prior ankle sprains.

Depending on the trauma and the forces involved four types of dislocations of the ankle are seen – posterior, anterior, lateral, and superior:

The most common type of ankle dislocation. Often occurs when foot plantar flexed.

The talus is moved posteriorly in relation to the distal tibia with a backward force acting on the foot.

The wider anterior talus results in forced widening of the joint and may cause a disruption of the tibiofibular syndesmosis or a fracture if the lateral malleolus.

Anterior dislocations occur when the foot is anterior. It typically occurs with the foot fixed and a posterior force applied to the tibia. It may also occur in forced dorsiflexion.

Lateral dislocations result from forced inversion, eversion, or external or internal rotation of the ankle. They are associated with fractures of either (or both) the malleoli or the distal fibula.

Superior dislocation is associated with diastasis of the ankle. It occurs when a force drives the talus upward into the mortise, usually seen as a result of a fall from a height.

There would always be a history of significant trauma, following which there is a deformity of the part and loss of the function [inability to bear weight or walk] and pain accompanied by swelling.

The examination would reveal significant edema. The deformity is usually visible except in gross swelling.

Tenting of the skin by the malleoli may be noted.

In associated fractures, tenderness, deformity, or tenting proximal to the joint may be seen.

Anteroposterior, lateral and mortise views/oblique view reveal the injury and if any associated fracture.

Computed tomography may be done to look for occult fractures, evaluation of alignment [after reduction]

A prompt reduction is important in reducing the risk of complications related to neurovascular compromise.

The reduction may be attempted before x-rays especially in cases with neurovascular compromise.

Tibialis posterior tendon entrapment or a bony fragment within the joint space may result in an irreducible dislocation warranting the open reduction.

The reduction may be done under sedation and as with all dislocations, there is no need to wait for anesthesia for attempting the reduction.

X-rays after reduction would confirm the reduction and alignment. In selected cases, an aid of CT may be taken for assessing the ankle after the reduction.

Patients should be immobilized in below knee splint after reduction of the ankle. Drugs for control of pain should be suitably given 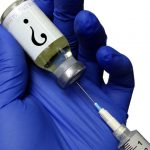 Blumensaat line is a line which corresponds to the roof of the intercondylar fossa of the femur as seen on a lateral radiograph of the knee joint. It is drawn on lateral projection x-ray of the knee. Blumensaat line is important because the angle that it forms on the radiograph with various other lines can be used to determine the position of the […]