Interestingly, spine syndrome was initially considered,  as a psychogenic disorder.

But now it has been established that apart from being a syndrome of psychiatric origin, many cases of bent spine syndrome origin from actual physical causes. Most of these causes originate from muscular diseases out which late-onset primary idiopathic axial myopathy has been implicated.

The weakness of the paravertebral muscles can be secondary to diseases affecting the muscular tissue. Camptocormia can be the predominant and sometimes revealing symptom of a more generalized muscular disorder. 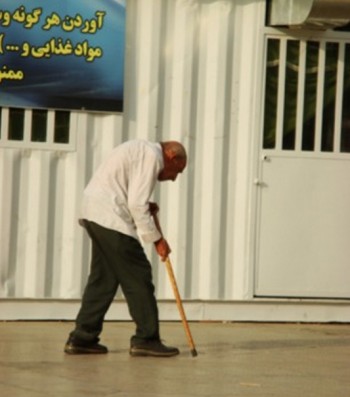 Why Does Bent Spine Syndrome Occur?

On lying down the dynamics of equilibrium changes and the deformity gets corrected.

Bent spine syndrome can be due to either of following

It is due to idiopathic muscular weakness in erector spinae [Axial myopathy]. The weakness of the paravertebral muscles leads to degradation of the muscular tissues, independently of their innervation. Primary bent spine syndrome is the most common variety encountered.

Following causes have been associated with the secondary bent spine syndrome

These various causes of secondary BSS must be systematically searched for when faced with an axial myopathy. Clinical examination and laboratory investigations are carried out to reach a diagnosis. From here on the discussion would be limited to diagnosis of primary bent spine syndrome.

Radiography would help to rule out any fixed spinal deformities.

CT scan in primary bent spine syndrome including dorsal and lumbar sections of the paravertebral muscles is the most useful diagnostic tool. Characteristic findings are

In neurogenic atrophy,  the muscle volume decreases, but the density of tissue remains normal.

MRI examination also shows a similar selective and marked fatty involvement of the paravertebral muscles. Also noted are the rarefaction of muscles fasciculi.

The laboratory studies are usually normal. Serum creatine kinase concentration is increased in some cases

EMG of the lower limbs, as well as conduction velocities, is usually normal.

Muscle biopsy reveals a  myopathic pattern showing e disorganization of the normal architecture with the replacement of variable intensity of the muscular tissue by fibrosis and fatty infiltration. There is a marked diminution of the number of fibers with variation in fiber size.

Bent spine has also been associated as a sign in a few neurological diseases including motor neuron disorders and movement and central nervous disorders like parkinsonism, axial dystonia and these should be ruled out.

There is no specific drug treatment for primary bent spine syndrome. The treatment includes symptomatic treatment for back pain, treatment of osteoporosis in elderly to prevent osteoporotic vertebral fractures. Good nutrition, weight control, physiotherapy, massage, exercises, and passive motion are an important part of the general manager.

Appropriate lightweight orthoses [braces] can help in the ambulation.

In the case of secondary bent spine syndrome, the treatable causes such as hypothyroidism should be treated.

Dysplasia epiphysealis multiplex is an uncommon, but not rare developmental abnormality characterized by irregularity in the density and configuration of epiphyses with minimal involvement of the spine. The condition is not recognizable at birth and often does not present until the ages of 6 or 7 years with bilateral symmetrical abnormalities. The number of epiphyses […]