The pelvic region of the trunk is the lower part of the trunk, between the abdomen and the thighs. It includes the following structures. Bony pelvis or pelvic skeleton is formed by hip bones, sacrum, and coccyx.

The pelvis is a ring structure made up of three bones: the sacrum and two innominate bones. The three bones and three joints composing the pelvic ring have no inherent stability without vital ligamentous structures.

The bony pelvis is formed posteriorly by the sacrum and the coccyx and laterally and anteriorly by a pair of hip bones.

This joint is between the sacrum and the last lumbar vertebra [L5]. It allows flexion and extension and a small amount of lateral flexion. It includes an intervertebral disc and joints between the articular processes.

In children, this joint contributes as much as 75% of flexion and extension in the lumbar spine but decreases considerably after that.

Apart from intervertebral supports, the lumbosacral joint is enhanced in strength by the iliolumbar ligament that extends from transverse process of L5 to iliac crest.

It is a secondary cartilaginous joint consisting of an intervertebral disc between the sacrum and coccyx and accessory ligaments. This joint may fuse with age.

The posterior sacrococcygeal ligament has a deep part, an extension of the posterior longitudinal ligament and a superficial part corresponding to the ligamenta flava [also called yellow ligament].

Sacro-iliac joints are synovial joints between the auricular surfaces of the sacrum and ilium on each side.

The sacroiliac joint is made up of two parts. The caudal portion consists of the articular surface of the joint; the upper, more dorsal portion, between the posterior tuberosity of the ilium and the sacrum, contains the fibrous or ligamentous parts of the joint (interosseous ligaments).

The joint is strengthened by following ligaments

It is thickening of anterior and inferior parts of the fibrous capsule. Its lower part is attached to preauricular sulcus.

It is a large and strong ligament which connects wide, rough areas adjoining concave margins of the auricular surfaces. It is covered by dorsal sacroiliac ligament.

It covers the interosseous sacroiliac ligament and from that, it is separated by dorsal rami of sacral nerves, and vessels.

This ligament consists of 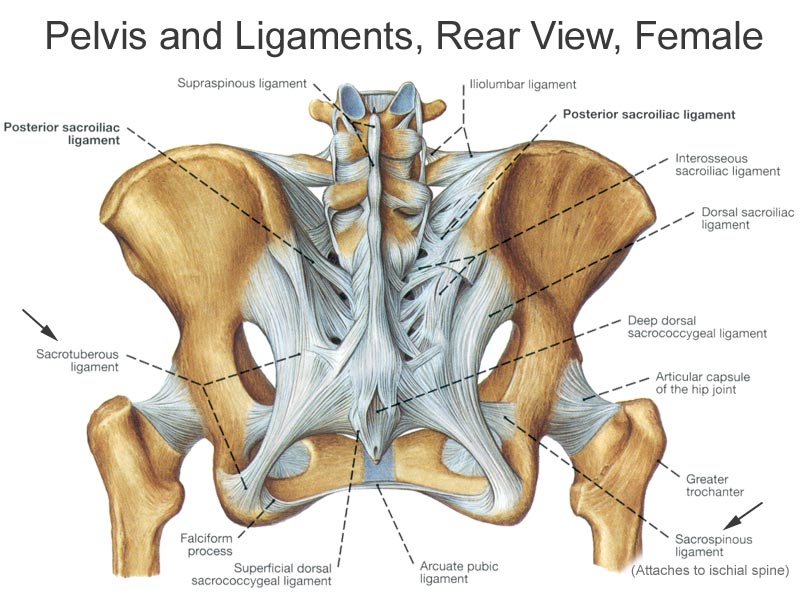 It is a strong triangular ligament which extends from transverse process of L5 to posterior part of the inner lip of iliac crest. It is continuous with the middle and anterior layer of thoracolumbar fascia and also gives partial origin to the quadratus lumborum. It is covered anteriorly by psoas muscle and posteriorly by erector spinae. Its main function is to prevent anteroinferior slipping under body weight. It also limits the forward movement at sacroiliac joint.

The lateral lumbosacral ligament is partly continuous with the iliolumbar ligament. It passes between the transverse process of the fifth vertebra to the ala of the sacrum where it intermingles with the anterior sacroiliac ligament.

This ligament, along with sacrospinous ligaments stabilize the hip bone on the sacrum and prevent the promontory from tilting forward. Additionally, these two ligaments transform the greater and lesser sciatic notches into the greater and lesser foramina, a pair of important pelvic openings. [The sacrotuberous ligament converts the sciatic notches into foramina, which are separated from each other by the sacrospinous ligament.]

Sacrotuberous ligament extends as wide base from the dorsal surface of the sacrum [lower transverse tubercles of the sacrum and lateral margin of the lower part of sacrum], the upper part of the coccyx, posterior superior and inferior iliac spine the ilium and coccyx and to the medial margin of the ischial tuberosity. It converts lesser and greater sciatic notches into foramina and forms the lateral boundary of pelvic outlet.

The sacrospinous ligament lies deep to sacrotuberous ligament extends from the lateral margin of the sacrum (and coccyx) to the ischial spine. Morphologically, the ligament is considered to be a degenerated part of the coccyx.

Iliolumbar, sacrotuberous and sacrospinous ligaments are together called vertebropelvic ligaments.

It is a cartilaginous joint between the bodies of the pubic bones.. The symphysial surfaces, each covered by hyaline cartilage, are united by an interpubic disc of fibrocartilage. The disc is reinforced by surrounding ligamentous fibers.

The pelvic cavity is a body cavity that is bounded by the bones of the pelvis and which primarily contains reproductive organs and the rectum.

A distinction is made between the lesser or true pelvis inferior to the terminal line, and the greater or false pelvis above it.

Area between the pelvic inlet [also called superior pelvic aperture and is bordered by the promontory, the arcuate line of ilium, the iliopubic eminence, the pecten pubis, and the upper part of the pubic symphysis] and pelvic outlet [also called inferior pelvic aperture and bordered by the or pubic arch [subpubic angle, the ischial tuberosities and the coccyx] is called lesser or true pelvis. 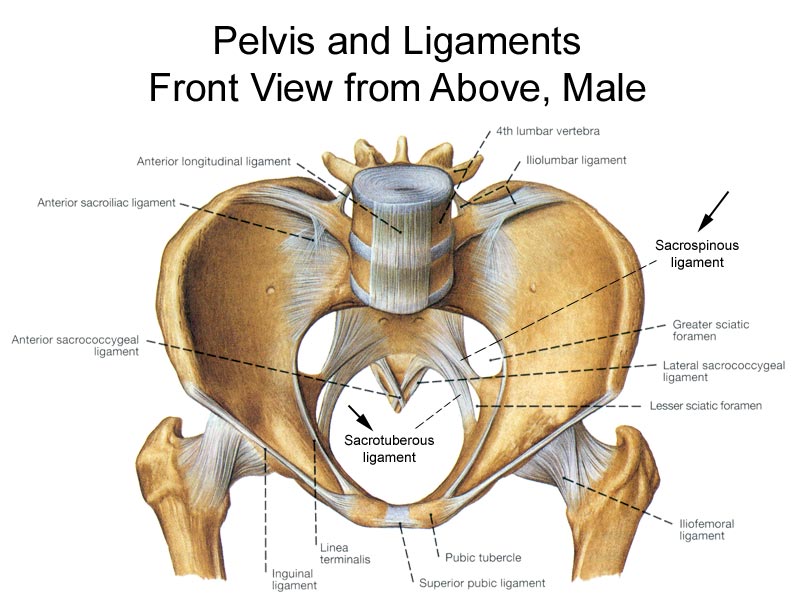 The inlet is at about 45 degrees of angle to the horizontal.

The greater pelvis or false pelvis is the space enclosed by the pelvic girdle above and in front of the pelvic inlet.

The pelvic floor functions to close the pelvic and abdominal cavities and bear the load of the visceral organs. It also controls the openings of the rectum and urogenital organs.

The wall of the pelvic cavity includes superficial muscles, such as the glutei, the hip bones, the sacrum and coccyx, and their associated ligaments,  deep muscles, blood vessels, nerves, and peritoneum.

The principal differences between male and female true and false pelvis include:

Ligaments of the pelvis provide it the required stability.

The posterior sacroiliac ligaments form a posterior tension band for the pelvis.

Terminal branch of the aorta, the median sacral artery, and the superior rectal artery [a continuation of the inferior mesenteric artery] also travel to the pelvis.

The neurological contents of the pelvis collectively have been referred to as the lumbosacral plexus which is discussed separately.

The skeleton of the pelvis is a basin-shaped ring of bones connecting the vertebral column to the femora.

The weight of the body is transmitted through the sacrum and ilia to the femora during standing and to the ischial tuberosities in sitting.

The primary function of the pelvis is to bear the weight of the upper body when sitting and standing, transferring that weight from the axial skeleton to the lower appendicular skeleton when standing and walking, and providing attachments for and withstanding the forces of the powerful muscles of locomotion and posture. It also protects the pelvic and abdominopelvic viscera, provides attachment for external reproductive organs,  associated muscles, and membranes.

Transitional vertebra at any junction is characterized by features retained from two adjacent regions in the vertebral column. For example in the lumbosacral transitional vertebra, there is an L5 vertebra can become like S1 vertebra or S1 can leave the sacrum and become L6. As we know from our knowledge of the anatomy of the […]

Terry Thomas sign is an important sign on wrist x-rays that indicate a type of wrist injury. It refers to an increase in the scapholunate space on an AP radiograph of the wrist or coronal CT scan. The increased distance indicates scapholunate dissociation and often can be associated with rotary subluxation of the scaphoid. The […]