The brachial plexus is a network of nerves formed by the anterior rami of the lower four cervical nerves and first thoracic nerve roots and proceeds through the neck, the axilla, and into the arm. The nerves coming out from this supply upper limb and shoulder girdle.

The brachial plexus consists of roots, trunks, divisions, cords, and branches. There are five terminal branches and numerous other branches along its length.

Five anterior rami of the spinal nerves, usually C5, C6, C7, C8, and T1 form the roots of the brachial plexus. Brachial plexus could be prefixed or postfixed when the formation of brachial plexus includes C4 or T2 respectively. These are considered as normal anatomical variations.

C5 and C6 join to form the superior or upper trunk, C7 alone continues as the middle trunk, and C8 and T1 join to form inferior or lower trunk.

Each trunk divides into two divisions anterior and posterior divisions.

The divisions again join to form three cords. The cords are named by their position with respect to the axillary artery.

Posterior cord is formed by the joining of three posterior divisions of the trunks. It contains fibers from all the spinal segments (C5, C6, C7, C8, T1)

The lateral cord is formed by the anterior divisions from the upper and middle trunks and contains fibers from C5, C6, and C7 spinal segments.

Lower trunk continues as medial cord and contains fibers from C8 and T1.

Radial nerve,  axillary nerve, median nerve, the musculocutaneous nerve, and ulnar nerve are called terminal nerves while others are nonterminal.

Dorsal scapular nerve originates from C5 nerve root with contribution from C4 in some cases. It supplies rhomboids and levator scapulae.

The dorsal scapular nerve is derived from the C5 root just after its exit from the intervertebral foramen. It serves as the motor nerve to the rhomboids major and minor muscles.

Originates from roots of C5, C6, and C7 and supplies serratus anterior. C5 root also gives branch to the phrenic nerve. The long thoracic nerve is derived from C5, C6, and C7 roots immediately after their emergence from the intervertebral foramina. The long thoracic nerve crosses the first rib and then descends through the axilla behind the major branches of the plexus. It innervates the serratus anterior muscle.

The phrenic nerve arises from C3, C4, and C5 root levels, although chiefly from the C4 nerve root. It crosses the anterior scalene from lateral to medial and extends into the thorax between the subclavian vein and artery.

The suprascapular nerve arises from the upper trunk and supplies supraspinatus and infraspinatus muscles. It contains fibers from C5 and C6.

Lateral Pectoral nerve contains fibers from the fifth, sixth, and seventh cervical nerves. Passing across the axillary vein and artery, it supplies pectoralis major after piercing the coracoclavicular fascia. It also sends few fibers to join the medial anterior thoracic nerve and the nerve formed innervates the clavicular head of the pectoralis major muscle.

The musculocutaneous nerve is a mixed nerve that leaves the brachial plexus sheath the axilla at the level of the lower border of the teres major muscle and passes into the coracobrachialis muscle. It carries fibers from C5, C6, and C7 and supplies coracobrachialis, brachialis and biceps brachii muscles in the flexor compartment of the arm. It also supplies sensory branches to skin over the lateral [radial] side of the forearm. It continues as the lateral cutaneous nerve of the forearm.

It consists of fibers from C5-6 spinal nerves.

Axillary nerve is derived from the posterior cord. It leaves the brachial plexus at the lower border of the subscapularis muscle supplies to the deltoid and teres minor muscles. It also supplies the skin just below the point of the shoulder [regimental badge area]. The axillary nerve continues as the superior lateral brachial cutaneous nerve of the arm.

The radial nerve is the continuation of posterior cord The along the posterior and inferior surface of the axillary artery and is an important nerve of upper limb that supplies innervate the extensor muscles of the elbow, wrist, and fingers. The skin on the dorsoradial aspect of hand is also supplied by the radial nerve.

The median nerve is formed by two roots, the lateral root is derived from the lateral cord and medial root is derived from medial cords. It supplies flexor muscles in the forearm and thenar muscles [muscles of thumb]. It also supplies skin on the palmar aspect of hand 3.5 digits (thumb, index and middle fingers, half of the ring finger) [see below].

It is the smallest branch of the brachial plexus which receives its fibers from the eighth cervical and first thoracic nerves. It travels along the axillary vein, and also sends communications to communicates with the intercostobrachial nerve.

It has its fibers from the eighth cervical and first thoracic nerves. It starts medial to the axillary artery. It gives off near the axilla, gives a supplying branch for a strip over biceps brachii. It descends medial to the brachial artery on the ulnar side of arm divides into a volar and an ulnar branch to supply forearm.

The ulnar nerve is derived from the medial cord. Motor innervation is mainly to intrinsic muscles of the hand (as seen in the image below). Sensory innervation is to the medial (ulnar) 1.5 digits (little finger, half of the ring finger).

Blood Supply of the Brachial Plexus

The brachial plexus is responsible for skin and muscular innervation of the entire upper limb, with two exceptions: the trapezius muscle innervated by the spinal accessory nerve and an area of skin near the axilla innervated by the intercostobrachial nerve.

Lesions of the brachial plexus can lead to severe functional impairment.

Brachial plexus injuries can be caused by stretching, diseases, and wounds to the lateral cervical region and severity can vary from complete paralysis to anesthesia.

Knowledge of the muscles innervated by branches of the brachial plexus and dermatome allows the physician to determine the localization of the affected site in brachial plexus injuries.

Osteochondrosis is a self-limiting developmental derangement of normal bone growth that primarily involves the centers of ossification in the epiphysis. It is a kind of an aseptic ischemic necrosis in a previously normal epiphysis though the role of ischemia is not clearly proved yet. As the research on osteochondrosis is gathering more data, few of […] 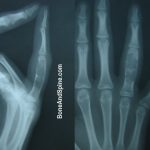