A mobile image intensifier generally consists of two units, the X-ray generator and image system on a portable imaging system (C-arm) and the workstation unit used to store and manipulate the images.

The imaging system unit can perform a variety of movements that allow for use in a variety of surgical procedures such as cardiology, orthopedics, and urology.

This unit provides the appropriate structure to mount an image intensifier and an X-ray tube with a beam limiting device positioned directly opposite from and aligned centrally to each other.

It is an imaging device which uses X-rays and produces a live image feed which is displayed on a TV screen. The term image intensifier refers to a special component of the machine, which allows low-intensity X-rays to be amplified, resulting in a smaller dose to the patient.

It aids in surgery by displaying the structure not visible or discernible otherwise and aids in accurate placement of implants. There are a number of surgeries which are not possible carry out unless aided by a C-arm.

A mobile C-arm IITV system is used during surgery for image-guided interventions or minimally invasive procedures.

In orthopedic surgery, it is specifically used in complicated cases such as repositioning dislocated bone fragments, placing pedicle screws in the spine or positioning osteosynthetic material.

Some imaging systems using either image intensifiers or flat panel detectors are capable of taking images in multiple planes that can be used to reconstruct a 3D volume of the patient anatomy.

This capability is typically used for surgical navigation. It can also be helpful for surgeons who want to check the placement of implanted devices in the patient, such as spinal screws.

Base of thumb fractures are the extra-articular and intraarticular fractures of base of first metacarpal bone. Thumb is a highly important and efficient digit that makes the human hand highly efficient. An unusable thumb could mean a loss of 40% of hand function. Relevant Anatomy [Read complete hand anatomy] Thumb consists of two phalanges and […] 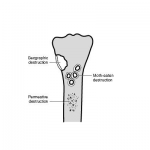