Other names for cast syndrome are

This was first described by Von Rokitansky in 1842 and later by Wilkie.

It is a rare syndrome and is more common in young females.

It should be kept in mind that this obstruction can occur in absence of plaster also because there are many causes to mesenteric artery obstruction.

Cause of Cast Syndrome

More than half of these cases have patients with scoliosis or kyphosis or treatment of hip conditions.

It has been seen after casting with

Thus the common denominator is extensive coverage of the abdomen and chest.

The problem usually is located at the junction of the third and fourth parts of the duodenum, where the duodenum is bound by the ligament of Treitz. The duodenum passes across the anterior aspect of the lumbar spine from right to left at the level of the first and second lumbar vertebrae. Just above this point, the superior mesenteric artery arises from the abdominal aorta and passes downward with its accompanying veins in the mesentery. 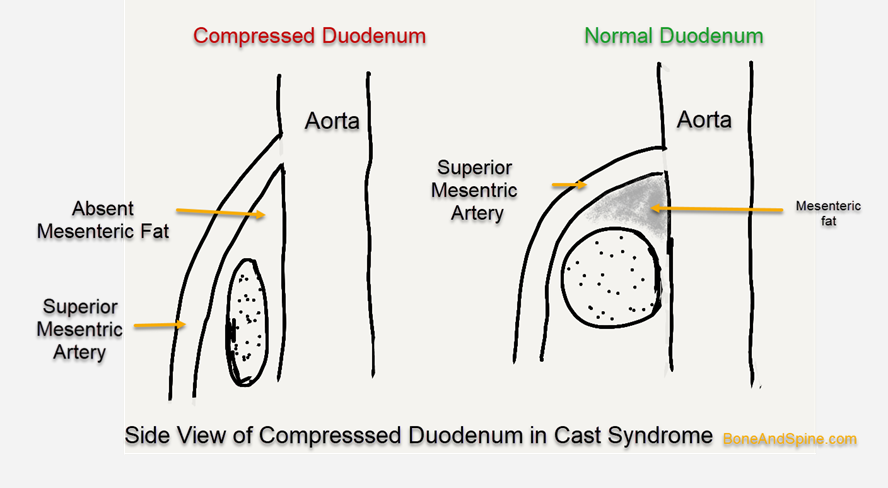 There is the potential for compression of the third portion of the duodenum between lumbar spine and aorta posteriorly and the mesentery and vessels anteriorly.

Gastric distention may aggravate the situation by forcing the remainder of the abdominal contents more distally and stretching the mesenteric vessels further leading to a spectrum of symptoms.

The signs and symptoms of cast syndrome are typical of upper intestinal obstruction.

They may develop insidiously or after several weeks after cast application or surgery.

The initial symptom is a feeling of fullness followed by nausea and vomiting.

Abdominal distention is obscured in the presence of a body jacket.

Following is the usual sequence of symptoms and signs

When these signs and symptoms occur in a patient who is in a body cast or who has had spinal trauma (including surgery), the diagnosis should be suspected.

X-rays of the abdomen may show early gastric dilatation.  Contrast may help to reveal the distention of the stomach and the proximal portion of the duodenum. Usually, there is a  sharp cutoff pattern at the region where the arteriomesenteric pedicle crosses the duodenum.

CT abdomen with IV contrast helps to reveal the following

Most of the biochemistry blood works would come normal. In later stages electrolyte imbalance may occur.

Cast syndrome may be prevented by avoiding constrictive body casts that accentuate lumbar lordosis or prevent normal changes in abdominal contour. Patients at risk should be turned frequently or encouraged to move from side to side.

Wound debridement or debridement is the process of removing infected, damaged, dead, nonviable tissue or foreign matter wounds so as to improve the healing potential of the remaining healthy tissue. Wound debridement can be achieved with surgery or by nonsurgical means. Why Wound Debridement is Done? A wound that contains tissue which is dead or […]

Charcot joint or Charcot arthropathy is the name given to neuropathic joint disease is a condition that causes progressive destruction of bone and soft tissues of joints especially weight-bearing joints and may also cause disruption of the bony architecture. Charcot joint disease can occur at any joint but most commonly in the lower extremity, at […]