Cervical spondylotic myelopathy is the most common spinal cord disorder in persons more than 55 years of age. The overall prevalence in this population is unknown.

Osteophytic overgrowth of cervical spondylosis ventrally and buckling of ligamentum flavum dorsally can cause direct compression of the spinal. Symptoms are believed to develop when the spinal cord has been reduced by at least 30 percent.

Presentation of cervical spondylotic myelopathy ranges from having subtle findings such as clumsiness of hand functions or balance difficulties to incontinence and complete paralysis.

The symptoms usually develop insidiously. The patient may report only neck pain and stiffness. Unilateral or bilateral deep neck, arm, and shoulder pain, clumsiness or slowness with activities such as buttoning buttons or using keys etc.  lower limb stiffness or clumsiness while walking may be present.

Need for of assistive devices during walking  [cane, walker, or wheelchair] due to weakness or balance or necessity to use a handrail while negotiating stairs may be changes that would suggest progression of the myelopathy.

Weakness or stiffness in the legs is considered to be the hallmark of cervical spondylotic myelopathy. Weakness or clumsiness of the hands in conjunction with the legs is also characteristic of CSM. Symptoms may be asymmetric. Changes in bowel or bladder dysfunction may be present in severe cases.

Physical examination may reveal loss of balance, decreased range of motion of the cervical spine.

Loss of motor strength, sensory changes, wasting of the intrinsic muscles of the hand, and spasticity may dramatically decrease upper extremity function and the condition is called myelopathy hand.

A normal patient should be able to grip and release their hand approximately 25–30 times in 15 seconds. Patients with chronic spondylotic myelopathy may find it difficult to do.

In patients with cervical spondylotic myelopathy, ulnar two digits [Ring finger and little finger] go into abduction and flexion after the patient holds his or her hand with the metacarpocarphalngeal joint, proximal interphalangeal joint and distal interphalangeal joint in extension extended for a minute or so. The basis of the test is, however, is not understood.

Reflexes may be increased in the upper and lower extremities. Signs suggestive of compression like Babinski (a pathologic extension of the great toe elicited by stroking the foot) Hoffman’s, and inverted radial may be positive. [These clinical signs are suggestive  of compression and not exclusive to myelopathy.]

Flexion of the neck may cause a generalized electric shock-like sensation down the center of the back [Lhermitte’s sign.].

Sensory abnormalities have a variable pattern on examination. Loss of vibratory sense or proprioception in the extremities (especially the feet) can occur.

The reflexes may be absent at the level of compression. For example, if the compression is at C5-C6, the biceps and supinator reflexes[c5, C6] may be absent, with a brisk triceps reflex (C7).

Ankle clonus may also be present in some patients.

Magnetic resonance imaging would reveal disc herniations, facet joint hypertrophy, folding of the ligamentum flavum, cord edema, and the sagittal diameter of the cord are indicative of the extent of the pathology.

Magnetic resonance imaging of the cervical spine is the procedure of choice during the initial screening process of patients with suspected cervical spondylotic.

CT would show best the  presence of bone spurs or any ossification of the posterior longitudinal ligament as a source of compression are best visualized on cervical CT scan and are important for operative planning.

CT myelography [Intrathecal injection of a contrast agent used in conjunction with CT] is used to assess cord compression especially a dynamic study for the visualization of contrast flow through the CSF in flexion, extension, and lateral bending. Since the advent of MRI, the use of myelography has decreased

It is important to ascertain the diagnosis before treatment is undertaken.  A study has reported up to 14% of patients who underwent surgery for cervical spondylotic myelopathy were later found to have other diagnoses.

Multiple sclerosis and amyotrophic lateral sclerosis are two conditions which can be confused for cervical spondylotic myelopathy.

MRI is in multiple sclerosis would identify demyelination in the spinal cord and cerebrum.  The cerebrospinal fluid examination would reveal oligoclonal bands. Visual evoked responses would reveal electrical patterns in the brain.

In amyotrophic lateral sclerosis, there would be no sensory abnormalities on neurologic examination. Electromyography would reveal a pattern of fasciculations and nerve degeneration pattern.

About 18 percent of patients with cervical spondylotic myelopathy is reported to improve spontaneously, 40 percent will stabilize and approximately 40 percent will deteriorate without treatment.

Soft collars allow the muscles of the neck to rest and limit neck motion. Soft collars should only be worn for short periods of time because long-term wear can decrease the strength of neck muscles.

Exercises improve neck strength and flexibility and may lessen discomfort.

Drugs like diclofenac and ibuprofen can reduce swelling and painful symptoms.

Apart from this cervical traction, skull traction and physical therapies are used.

Age, activity level, and functional status should all be taken into consideration when considering non-operative treatment.

Symptomatic patients of cervical spondylotic myelopathy who are not responding to medical treatment, or have progressive symptoms, bowel or bladder involvement, or overt weakness should be considered for operative intervention.

The operative treatment is effective to prevent a further decline in function, improvement in the current level of function might not be much. Following patients perform better with surgery.

The primary goal of surgery in cervical spondylotic myelopathy is to decompress the spinal cord, thus giving the neural elements more room.

Surgeries for CSM are broadly classified into anterior and posterior. In the presence of anterior compression, posterior decom­pression is indirect. Surgical techniques are as outlined below.

In this, the neck is approached from the front. As the name suggests, the disc is removed and space is filled with bone graft. Cervical plates and screws are commonly used to help keep the bones in place till the actual fusion occurs.

The vertebra is removed and replaced by a bone graft.

A combination of the two procedures may be performed.

Using a posterior approach. bony arch (lamina), any bone spurs, and ligaments that are compressing the spinal cord are removed. Laminectomy relieves pressure on the spinal cord by providing extra space for it to drift backward.

Fusion with a bone graft and fixation with screws and rods may be added.

Laminectomy is ideal for people with very small spinal canals,  swollen soft tissues at the back of the spine, and multiple level problems than spanning four or more spine segments.

It is a procedure that hinges the lamina open, without complete removal of the bone. The advantage of the procedure is that it preserves 30 to 50% of motion at the involved levels.

After surgery, about one-third of patients improve, one-third stay the same, and one-third continue to worsen over time.

This gives the limb an overall the appearance of an archer’s bow. This condition may present from infancy through adulthood and has a variety of causes. The problem may be unilateral which would result in functional leg length discrepancy or bilateral. It is interesting to note that almost all babies are born bow-legged. By the time […]

The pelvic region of the trunk is the lower part of the trunk, between the abdomen and the thighs. It includes the following structures. Bony pelvis or pelvic skeleton is formed by hip bones, sacrum, and coccyx. Anatomy of the pelvis includes anatomy of the bony pelvis and its contents. In this article, we would discuss […] 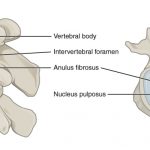 The Intervertebral disc is a kind of cushion-like structure between two vertebrae that absorbs the forces across the vertebra and provide cushion during motion of vertebrae, thus preventing grinding of vertebrae against each other. Discs are avascular structures and receive nutrition via osmosis from surrounding structures. They are in fact the largest structure of the […]

An osteotomy is a surgical procedure where the bone is cut to change its length or alignment. Often the procedure is done in an attempt to correct an … END_OF_DOCUMENT_TOKEN_TO_BE_REPLACED