Chance fracture is a flexion-distraction injury that involves only the osseous structures from posterior to anterior through the spinous process, pedicles, and vertebral body, respectively because the bony elements fail,  and ligamentous components remaining intact.

In adults, the Chance fracture most commonly is found in the upper lumbar spine, but it may be observed in the mid-lumbar region in children.

Unrecognized, Chance injuries may result in progressive kyphosis with ensuing pain and deformity.

The earlier Chance fracture was treated as a separate entity but modern textbooks use the term flexion distraction injuries and chance fractures as synonyms.

Chance fractures are horizontal avulsion injuries of the vertebral bodies caused by flexion around an axis anterior to the anterior longitudinal ligament. The entire vertebra is pulled apart by a strong tensile force due to a failure of bony elements and leaving ligamentous structures intact.

The characteristic feature of a flexion-distraction injury is primarily tensile failure of the posterior ligamentous complex, facet capsules, and intervertebral disc or bone itself. Injuries rarely occur through bone alone and are most commonly the result of osseous and ligamentous failure.

Chance fracture represents a pure bony injury extending from posterior to anterior through the spinous process, pedicles, and vertebral body, respectively and in its true original sense, it is quite rare now.

The Chance fracture was first described by G.Q. Chance in 1948.

Chance fractures later became known as “seat-belt fractures” or “seat-belt injuries” as it was the most common cause after the advent of lap seat belts in cars. A head-on collision would cause the passenger wearing a lap-belt to suddenly be flexed at the waist, thus creating tremendous stress on the posterior elements of the vertebra.

Most of the vehicles now have a combination of shoulder and lap belts. With this switch, Chance fractures have become less associated with automobile injuries. Most Chance fractures now result from falls or crush type injuries where the thorax is acutely hyperflexed.

Cause of Chance Fracture

Flexion-distraction forces are responsible for the Chance fracture. Usually related to lap seatbelt wear, this mechanism can result in complete ligamentous injury or a combination of bony, ligament, and disc involvement.

The patient presents with back pain. The examination may reveal seatbelt abrasions. Intra-abdominal injuries must be looked for. The complete neurological examination should be performed.

Routine AP and lateral radiographs of the thoracolumbar spine may reveal demonstrable fracture line may be detected extending through the spinous process, pedicles, and vertebral body. CT scans with frontal and sagittal reconstructions can assess the injury better.

Chance fractures may generally be managed by closed reduction and immobilization. For immobilization, a thoracolumbosacral orthosis (TLSO) or hyperextension cast may be used.

A rehabilitation program consisting of extension exercises can be instituted, and most individuals return to work within 6 months. A residual backache may be a problem for the first year postinjury.

Surgery may be indicated in polytrauma patients or where the closed reduction is difficult.  The surgery aims at alignment of the spine is of the utmost importance, followed by stabilization and arthrodesis. A rod-hook, hook-pedicle screw-rod, or pedicle screw-rod construct may be used for the fixation.

The most common complications are residual kyphosis and chronic mechanical back pain.

With proper recognition and early management, near-anatomic reduction and healing can be expected.

Crankshaft phenomenon occurs in the scoliotic spine when the posterior part of the spine is fused. A solid spinal fusion stopped the longitudinal growth in the posterior elements, but the vertebral bodies continued to grow anteriorly. The anterior growth causes the vertebral bodies and discs to bulge laterally toward the convexity and to pivot on […] 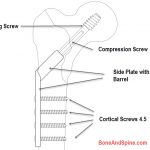