For evaluation of curves in scoliosis, an anteroposterior radiograph is used.

Scolioisis is defined as Cobb angle more than 10 degrees.

The apical vertebra is the vertebra that is displaced and rotated the most. Its end plates are least tilted.

The most superior and inferior vertebrae of the curve are called end vertebrae. These vertebrae are least displaced and rotated.

These vertebrae appear laterally wedged, longer in the convex side, and compress

There is the maximal tilting of the endplates towards the curve.ed on the concave side.

The neutral vertebra is the first vertebra after end vertebra which is not rotated on the anteroposterior image.

How to Measure Cobb Angle

For measurement, When assessing a curve the apical vertebra  is first identified. This is the most likely displaced and rotated vertebra with the least tilted end plate.

The end/transitional vertebra are then identified through the curve above and below.

The end vertebra is the most superior and inferior vertebra which are least displaced and rotated and have the maximally tilted end plate.

The angle between these two lines or lines drawn perpendicular to them is measured as the Cobb angle.

In S-shaped scoliosis where there are two contiguous curves the lower end vertebra of the upper curve will represent the upper-end vertebra of the lower curve. Because the Cobb angle reflects curvature only in a single plane and fails to account for vertebral rotation it may not accurately demonstrate the severity of the three-dimensional spinal deformity.

As a general rule, a Cobb angle of 10 is regarded as a minimum angulation to define scoliosis.

Cobb’s angle is used to ascertain the presence of scoliosis and measure its severity.

It is not only helpful for diagnosis but also useful for planning treatment and predicting diagnosis.

When a Cobb angle is greater than 50 degrees, the patient almost always requires corrective surgery.

Scoliosis is a three-dimensional deformity but Cobb angle is the uniplanar measurement.

There is an interobserver variation of 5 to 10 degrees.

Moreover, the variations can occur with changes in supine and upright positioning, rotation, body shape etc.

The angle for kyphosis is measured in a similar manner. See the image below. 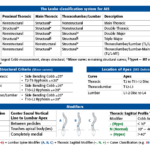 Triphalangeal thumb, as the name suggests is a thumb with three phalanges. In the normal human hand, the thumb has two phalanges. It occurs in about one per 25,000 births, constituting the second most common type of thumb duplication. It is inherited as an autosomal dominant trait. There is no sex predilection. In about 87 […]