Congenital kyphosis is the presence of ky[hotic deformity or hump in the spine due to congenital vertebral anomalies.

Kyphosis is exaggerated forward spine bend and it is called congenital as it occurred prior to birth.

The vertebral defect which usually occur in the first six to eight weeks of embryonic life causes the spine to develop a sharp forward angulation as it grows.

The anomalies fall into three groups

Combination of the two can exist but is quite rare.

Type I deformities are more common and occur more commonly in the thoracic spine and at the thoracolumbar junction.

Defects of the formation may involve only a single level, but multiple defects are possible. The failure of the formation can result in a range of deformities from kyphosis [anterior defect] to kyphoscoliosis [anterolateral defect with a posterior corner hemivertebra].

Rate of progression is lesser in cases with failure of separation.

The more severe the anterior defects, the more progressive the deformity.

Kyphosis from the failure of formation is progressive and, if left untreated, can lead to paraplegia.

The paraplegia is often seen more common during the adolescent growth spurt when a rapid increase occurs in the untreated kyphosis.

Apart from this a minor trauma may result in a neurological deficit.

Paraplegia is more common with kyphosis in the upper thoracic area as here, the collateral circulation is poorest.

The deformity may be detected before birth on a prenatal ultrasound examination or noted on clinical examination after birth. Mild deformities may remain unnoticed till growth spurt where a rapid growth makes them obvious.

High-quality, anteroposterior and lateral radiographs are the basic imaging studies and help to

Cardiac evaluation and renal ultrasonography should be done in these patients to look for visceral abnormalities.

Nonoperative treatment in these patients is ineffective.

The operative procedure depends on

Every patient needs to be individualized in these patients. Following are general guidelines

First two complications can be minimized by performing anterior and posterior fusions for deformities > 50 degrees.

Risk of paralysis can be lessened by not attempting for maximum correction at the time of instrumentation.

Baker cyst or popliteal cyst is a soft-tissue swelling that contains gelatinous fluid, in the posterior aspect of the knee. It occurs both in adults and children. In adults, the baker cyst communicates frequently with join and is associated with an intraarticular condition like meniscal tears or osteoarthritis. However, in children, this condition often does […] 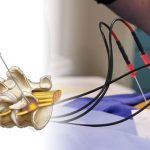