The condition leads to a painless mass over the clavicle. The pseudoarthrosis is usually seen on the right side though bilateral cases have been reported.

The pseudoarthrosis is fully present at birth.

Functional impairment is uncommon in children.

Familial incidence is reported in some patients, particularly in bilateral cases.

Clavicle connects the sternum to the acromion and provides support for shoulder function. The clavicle is the first bone of the fetus to ossify. this occurs around fifth week of gestation.

It is formed by two primary ossification centers, one medial and one lateral. These fuse around 8th week to result in one whole clavicle. When these ossification centers fail to fuse, it results in congenital pseudarthrosis. A fiborus tissue bridges the defect in most cases.

The bone ends at the defect appear sclerotic and may be tapered.

Disruption of membranous ossification due to environmental insult or anatomic or mechanical event could be the cause.

The exact cause and pathogenesis is unknown. It has been thought to be caused by excessive pulsation of the
subjacent subclavian artery against the clavicle.

Abnormal intrauterine position has been suggested as possible causes too

It must be noted that the defect is not due to the nonunion of a birth fracture of normal bone as all neonatal clavicular fractures unite rapidly with massive callus.’

The cervical rib can be associated in about 15%.

A swelling just lateral to the middle of the clavicle is discovered at birth or after. The swelling is not painful or tender. There is no history of birth injury or other trauma. Most of the cases present by two weeks of age.

The child does not have symptoms and there is no functional impairment even in older children.

The deformity tends to become more obvious with the child’s growth. Pseudoarthrosis may become painful with some activities that involve movements above head level or with direct compression of the focus.

The deformity usually increases and becomes unsightly with further growth, more so when there is marked mobility at the site of the pseudarthrosis. The overlying skin becomes thin and atrophic.

The parents and older children are often concerned about the unsightliness of the swelling.

Mild drooping of the affected shoulder with asymmetry and prominence of the vertical border of the scapula may be noted on examination.

Some children may complain of mild pain around the shoulder girdle and upper arm.

There is little or no functional disability. Some children may complain of the limitation of shoulder abduction.

The radiographic findings are characteristic. The recommended view is anteroposterior view of the clavicle.

The medial fragment is positioned above the lateral fragment because of the action of muscle forces and the postural traction exerted by the weight of the upper limb.

There are no other skeletal abnormalities and this feature distinguishes it from cleidocranial dysostosis.

MRI is rarely indicated but may be used to determine the extent of the fibrous union, the location of the great vessels, and the space available within the thoracic outlet.

The conservative treatment of congenital pseudoarthrosis of clavicle achieves does not result in the union. But not all the cases require surgical treatment too. Most of the cases have minimal symptoms and cosmetic deformity can be managed conservatively.

The procedure is done in 3-6 years of age group. 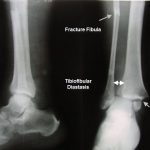