That means the upper end of both the bones, radius, and ulna are fused, making it impossible for the radius to move for pronation and supination movement.

In about 60 percent of cases, involvement is bilateral.

Male and female incidence is approximately equal. Roughly, the male-female ratio is 3:2.

Though the condition is present at birth, it is often not discovered until early adolescence.

During development, the forearm begins as a single cartilaginous anlage [the rudimentary basis of a particular organ in fetus].

It divides from distal to proximal into the radius and ulna in the 7th week in utero. Abnormal events at the time of separation of anlage can lead to the failure of segmentation.

Thus, congenital radioulnar synostosis results from failure of segmentation between the radius and ulna.

This synostosis leads to loss of motion between two bones [pronation and supination].

The degree of fusion is variable in different persons and depends on the degree of the insult.

In severe cases, the fusion may involve the radial head as well. If the synostosis is fibrous, the slight motion may be allowed but bony synostosis results in the total loss of the motion, namely, supination and pronation.

There could be associated hypoplasia [less than normal size] and atrophy of brachioradialis, pronator teres, pronator quadratus, and supinator muscles.

Moreover, initially, the union may be cartilaginous, but the bony bridge is seen on x-ray as the skeleton matures.

Sixty percent of the cases are bilateral and about one-third of cases are associated with general skeletal abnormalities. These are

Positive family history is seen in about 20% of patients. Familial cases generally have an autosomal dominant inheritance

The average age at diagnosis is about 6 years old. It is not a painful condition in childhood. Pain may be reported in teen years.

The condition can go unnoticed till adolescence.

Congenital radioulnar synostosis is without any symptoms mostly. It is painless and often the main complaint is deformity or limitation of motion. This is mostly noted by parents, caregivers, or teachers.

The patient has difficulty with specific tasks that involve pronation and supination.

On examination, the forearm is fixed in pronation usually 30 degrees of pronation. However, the flexion movement of the elbow is usually preserved.

There could be compensatory movements of the shoulder, [shoulder abduction for pronation and shoulder adduction – for supination compensation]. But severe cases may not be able to compensate.

There could be hypermobility of the wrist joint.

The extension of the elbow may be limited.

The involved forearm is thinner than normal and somewhat twisted in appearance.

AP and lateral radiographs of forearm and elbow are able to diagnose congenital radioulnar synostosis.

Radiographic follow-up is required even in asymptomatic cases to note any progressive subluxation of the radial head.

Nonoperative treatment is the preferred treatment especially in asymptomatic patients with unilateral affliction. It consists of observation and monitoring of symptoms.

Each patient is individually evaluated to determine the treatment required.

Severe deformity and is bilateral involvement may be considered for surgery.

Following patients should not be considered for surgery

The actual decision for surgery is based on the limitation of functions rather than the absolute forearm position.

The patients with subluxation of head require excision of the head at skeletal maturity. The rest of the procedures should be performed in preschool age.

The surgical options include

The aim is to restore active forearm rotation.

The tissue interposed is vascularized fascio-fat graft which is said to be better than fat.  Silicone or muscle have also been used.

The results are unsatisfactory in most cases. At best there is a slight improvement in motion and recurrence of synostosis is common.

It is the most preferred and successful procedure. It involves osteotomy, rotational correction, and fixation with transcutaneous pins.

The osteotomy is preferred through the synostosis but carries a greater risk of neurovascular compromise.

Other sites of osteotomy are

Overall, surgical treatment of congenital radioulnar synostosis has high failure rates.  The use of postoperative indomethacin or low-dose limited field irradiation within the first 5 days after surgery has been shown to be effective in limiting the recurrence.

Elbow arthrocentesis refers to puncture of the elbow joint and the aspiration of its synovial fluid. It is used for synovial fluid analysis to aid in diagnosis and also for therapeutic purposes. Analysis of the removed fluid helps to reach at its etiology. Anatomy of Elbow Joint Elbow region is the connecting region between arm […] 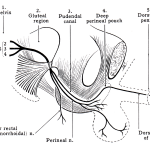 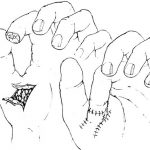