Radiogrammetry is a technique that uses a conventional radiograph for the assessment of bone status by using cortical width as a measure of bone strength.

Osteoporosis is defined as a systemic skeletal disease characterized by low bone mass and micro-architectural deterioration of bone tissue, with a consequent increase in bone fragility and susceptibility to fractures.

Measurement of bone mineral density forms the basis for the working definition of osteoporosis. 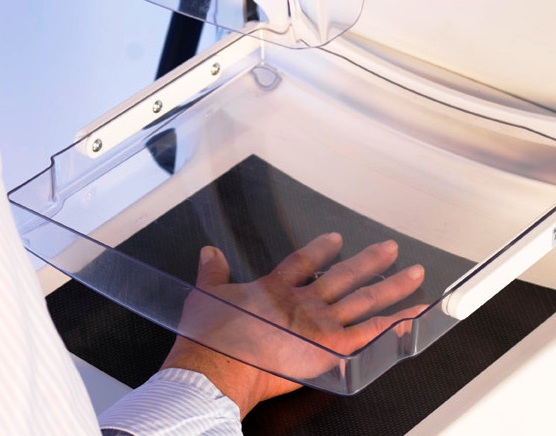 Digital x-ray radiogrammetry uses computerized radiogrammetric analysis and textural analysis of a digitized radiograph of the hand. Information from the middle three metacarpals is used by the system to generate a BMD estimate. Digital Xray Radiogrammetry was approved by US FDA in 1999.

A plain radiograph of the non-dominant hand (preferably) is taken under standardized conditions. After checking the quality of the radiograph, it is placed in a scanner, which digitizes the image. The initial computer processing identifies anatomical landmarks and automatically defines the ‘Regions of Interest’ (ROIs). The digitized image is displayed on the screen with the ROIs superimposed. There is no operator activity involved in placing the regions.

The resulting  DXR-BMD estimate is presented as

Repeated studies have shown a  high correlation of DXR -BMD with DXA-BMD. It is said to be good in predicting fractures as well as discriminate patients with and without fractures.

Moreover, DXR-BMD can also detect a change in bone density with time and anti-resorptive therapy.

The investigation is operator independent.

Sprengel deformity is a congenital condition where the scapula is small and located higher than its normal position because of its failure to descend to its position. There could also be scapular winging and presence of omovertebral bone 30-50%]. Omovertebral bone is an anomalous bone connecting the elevated scapula to the cervical spine. It is […]