A person is said to have drug-resistant tuberculosis if the tuberculous bacteria that the person is infected with, will not respond to, and are resistant to, at least one of the main antitubercular drugs.

Drug-resistant tuberculosis occurs when bacteria become resistant to the drugs used to treat TB. This means that the drug can no longer kill the tuberculous bacteria.

Drug-resistant tuberculosis can spread from person to person in the same way that drug-susceptible tuberculosis is spread.

The countries with the largest number of drug-resistant tuberculosis are China, India and the Russian Federation.

There were an estimated 250,000 deaths from Drug-resistant tuberculosis in 2015. More than half of these patients were in India, China and the Russian Federation.

How Does Drug-Resistant Tuberculosis Occur?

There are two ways that people get drug-resistant TB.

Acquired Resistance Due to Inadequate Treatment

Firstly, people get acquired drug-resistant TB when their TB treatment is inadequate. This can be due to

Overall, drug-resistant tuberculosis is more common in people who

Multidrug-resistant TB (MDR TB) is caused by TB bacteria that is resistant to at least isoniazid and rifampin. These are the two most potent TB drugs.

Extensively drug-resistant TB (XDR TB) is a rare type of MDR TB that is resistant to isoniazid and rifampin, plus any fluoroquinolone and at least one of three injectable second-line drugs (i.e., amikacin, kanamycin, or capreomycin).

In 2016 by WHO declared that person with tuberculosis resistant to rifampicin, with or without resistance to other drugs, should be treated with an MDR-TB treatment regimen.

That simply means when a person is resistant to rifampicin, the person is treated like MDR –TB. It can be considered as an expansion of the definition of MDR-TB.

This group of patients is sometimes referred to as MDR/RR-TB to differentiate.

Uncomplicated MDR-TB is the term some TB which is resistant to isoniazid and rifampicin (making it MDR TB) but it is known that the bacteria are not resistant to any of the second line TB drugs.

It is sometimes also referred to as extremely drug-resistant TB, and it is extremely difficult, to treat.

Before a patient could be put on treatment, it is important to know what drug could be effective. This is known as drug susceptibility testing which tells us the drugs the bacilli are sensitive to.

Historically drug susceptibility testing has been done through culturing bacteria. It needs specialized labs and trained personnel. Moreover, it is a very lengthy process.

GeneXpert test involves looking at genetic mutations since the resistance arises from genetic mutations. WHO has recommended that the test should be used as the initial diagnostic test in individuals suspected of having MDR TB, or HIV associated TB.

Another type of molecular assays like line probe assays may also be used as GeneXpert test is expensive to carry.

The  drugs are grouped according to efficacy, the experience of use and drug class

Group 1 drugs are the most potent and best tolerated.

If there is good laboratory evidence and clinical history that suggests that a drug from this group is effective, it should be used. The newer rifamycins, such as rifabutin, have very high rates of cross-resistance to rifampicin.

All patients should receive a Group 2 injectable agent if susceptibility is documented or suspected.  Kanamycin or amikacin is the first choice of an injectable agent, given the high rates of streptomycin resistance in drug-resistant TB.

All patients should receive a Group 3 medication if the strain is susceptible or if the agent is thought to have efficacy. One of the higher generation fluoroquinolones, such as levofloxacin or moxifloxacin, is the fluoroquinolone of choice. Ciprofloxacin is no longer recommended to treat drug-susceptible or drug-resistant TB.

Ethionamide  and p-aminosalicylic acid (PAS)  are relatively well tolerated and that there is no cross-resistance to other agents.

When two agents are needed, cycloserine can be added.

Ethionamide (or protionamide), cycloserine and PAS are usually used together only when three group 4 agents are needed.

Terizidone can be used instead of cycloserine and is assumed to be equally efficacious.

Group 5 drugs are not recommended by WHO for routine use in drug-resistant TB treatment because their contribution to the efficacy of multidrug regimens is unclear. They can be used in cases where it is impossible to design adequate regimens with the medicines from Groups 1–4, such as in patients with XDR-TB.

Principles and Guidelines for MDR-TB treatment

This is so because it requires the use of “second line” or reserve drugs that are more costly and cause more side effects. Also, the drugs must be taken for up to two years.

A shorter regimen is usually considered suitable for patients with rifampicin resistant or multi-drug resistant TB who have not been previously treated with second-line drugs and in whom resistance to fluoroquinolones and second-line injectables has been excluded or is considered highly unlikely.

It is recommended that patients are tested for susceptibility or resistance to fluoroquinolones and to the second line injectable agents first. Patients with strains resistant to any of the two groups of medicines should be treated with a conventional MDR-TB regimen.

Use at least 4 drugs certain to be effective

Do not use drugs for that might have of cross-resistance

Eliminate drugs that are not safe

How to Select Drugs for Regimen

The total number of drugs will depend on the degree of uncertainty, and regimens often contain five to seven drugs.

Each dose in an MDR regimen is given as directly observed therapy throughout the treatment.

Close monitoring is essential during treatment of MDR-TB patients.

Duration of treatment for MDR-TB

In MDR-TB treatment, the intensive phase is defined by the duration of treatment with the injectable agent.

The injectable agent should be continued for a minimum of 6 months, and for at least 4 months after the patient first becomes and remains smear- or culture-negative.

Review of the patient’s cultures, smears, X-rays and clinical status may also aid in deciding whether or not to continue an injectable agent longer than the above recommendation, particularly in the case of patients for whom the susceptibility pattern is unknown, effectiveness of one or more agents is questionable, or extensive or bilateral pulmonary disease is present.

Culture conversion also determines the overall duration of MDR treatment. These guidelines recommend continuing therapy for a minimum of 18 months after culture conversion. Extension of therapy to 24 months may be indicated in chronic cases with extensive pulmonary damage.

The most important way to prevent the spread of drug-resistant TB is to take all TB drugs exactly as prescribed by the healthcare provider. No doses should be missed and treatment should not be stopped early. 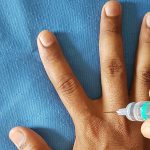