Elbow is a very important part of upper limb function and plays a very important role in the positioning of the hand for grip and prehension. Various day to activities and recreational and sports activities require a wide range movement at the elbow in both flexion and extension and forearm rotation.

Elbow is relatively a stable joint and is dislocated by sufficient force. Because of their vicinity, neurovascular bundle is quite vulnerable to injury in elbow dislocation.

For purpose of terminology, most classifications refer to the position of the ulna relative to the humerus after injury. For example, a posterior dislocation refers to the ulna and radius sitting posterior to the humerus.

Injury can be classified as

Posterior dislocations of the elbow are commonly caused by a fall on the hand or wrist. As force is transmitted from the fall to the extended elbow, a resultant anterior force is generated that levers the ulna out of the trochlea. As the joint continues to hyperextend, the anterior capsule and collateral ligaments are placed under increasing tension and eventually fail.

Anterior dislocation may be caused by impact on the posterior forearm in a slightly flexed position.

The first priority of care is to assess the neurovascular status of the hand and forearm. Brachial artery and median and ulnar nerves are most vulnerable. X-rays, anteroposterior and lateral views of the elbow are studied for associated fractures around the elbow.

Anteroposterior and lateral views of the elbow are sufficient for diagnosis. In case of a vascular injury appropriate investigations like color doppler and arteriography help to find the injury and plan the treatment.

In case of vascular injury, the repair of the vessel is the first priority. However, in associated nerve injuries, the treatment of closed reduction and plaster application can be very well initiated and observed.

If the dislocation is open with a large wound over the elbow, surgery is almost always required.

Because of the mechanism of injury, a fracture of the olecranon commonly occurs with this injury. The arm appears shortened and forearm is in supination. The distal humerus is prominent posteriorly. The biceps tendon tents the skin anteriorly. Because the the dislocation is anterior, injury to nerve and vessel can occur frequently. Therefore, careful assessment for neurovascular injury is mandatory.

The reduction maneuver is the reverse of the posterior dislocation.

Medial and lateral dislocations present with a widening of the elbow. However, the relative lengths of the arm and forearm are not changed much.

The patient presents with typical symptoms of painful swelling and the diagnosis should be suspected if mediolateral widening of the elbow is present.

Anteroposterior and lateral views are sufficient to make the diagnosis.

In the anteroposterior x-ray, a pure medial or lateral dislocation shows the greater sigmoid notch of the ulna in the plane of the distal humerus

The clinical diagnosis can be difficult in some cases especially in some patients of lateral dislocations with considerable swelling.

As with otheorthopedic injuries, neural and vascular examination must be done to rule out the injury to these structres.

The treatment of pure medial and lateral elbow dislocation is closed reduction followed by splintage in reduced position for the required period. In case of associated  fractures or failure of closed reduction, surgery might be needed.

Divergent of the Elbow Dislocation

Divergent dislocation of the elbow is another rare type of dislocation. In this, the radius and ulna dislocate in diverging directions.

There are two types of this dislocation

Anteroposterior type is more common.  It this, a posterior dislocation of the ulna occurs resulting in the lodging of coronoid process in the olecranon fossa. The radial head is lies anteriorly in the region of the coronoid fossa.

This kind of injury occurs when  the forearm is  in forced pronation and the humerus is forced distally, separating the radius and ulna.

This injury causes massive soft tissue trauma and along with ligaments of the elbow, the interosseous membrane is torn.

Examination and investigations are done in the usual manner.

Reduction technique is similar to that of a posterior dislocation.

Brachial artery can be injured in dislocation of the elbow because of its vicinity. It can occur independently or along with nerve injury.

The injury would, be evident in the clinical examination of the affected extremity. The affected limb would be cold or would have lesser temperature as compared to opposite limb. On examination, distal pulses would be absent. However, presence o pulses do not rule out vascular injury per se. It is necessary to examine for signs of increased compartment pressure in the forearm and hand. Pain with a gentle passive extension of the digits is the most important early indicator of ischemia.

The elbow needs to investigated as that without injury. Loss of pulse does not preclude attempted closed reduction.

After the diagnosis has been made, the elbow should be gently reduced. If the pulse at the wrist does not return after the reduction, the patient should be investigated for arterial injury.

Once the lesion has been identified, the patient should be prepared for immediate arterial reconstruction. Arterial repair with saphenous vein grafting is the standard of care. If the zone of injury is quite extensive, and if full mobility after the repair is attempted, the reconstructed vessel must have adequate length to permit full extension. Occasionally no graft is needed.

In addition to injury, the nerve can be affected at the time of reduction.

If a nerve is injured at the time of injury and does not improve after the reduction, it is best for to wait and watch for recovery. If no sign of recovery is noted till 3 months, an operation should be considered.

In case of open injury, early exploration should be done.

In case the injury to nerve occurs at the time of reduction, exploration is indicated. 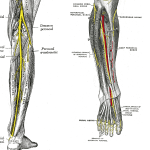