Erythromelalgia is a rare neurovascular peripheral disorder characterized by burning pain, warmth, and redness of the extremities.

The condition gets its names derived from three Greek words:

The term erythromelalgia was proposed in 1990 by Drenth and Michiels in the Netherlands.

In 2004, it was found to be associated with a sodium (Na +) channel mutation.

There are two types  – primary and secondary. Within primary, there is a subtype that occurs early and is called early erythromelalgia.

The prevalence of either primary or secondary individually is not known. Early-onset erythromelalgia is rare.

In early reports, the median age of onset of the early-onset form was 10 years.

The severity of the disorder is variable within the family members of the affected pedigree.

The disease in children under 10 years old is mainly primary [early erythromelagia] whereas, in adulthood, it could be either primary or secondary.

It presents as recurrent painful bilateral limbs and arterial hypertension. Feet soles and hand palms are affected primarily. It can occur as frequently as daily and could cause incapacitation or compromise of upper and lower limbs.

The age of onset of the symptoms has been correlated with Na+ channel voltage activation.

In this type,  there is an underlying cause for the condition. In some cases, the symptoms could precede the underlying disease by at least two years. It could be present in children as well as in adults.

Most reported cases of secondary erythromelalgia are due to myeloproliferative disorders with thrombocytosis (Polycythemia vera or essential thrombocytosis are most common). Other common associations paraneoplastic syndromes, autoimmune diseases, toxins, and infections.

The reported prevalence of erythromelalgia in myeloproliferative disorders is 3% to 65%.

A list of causes of secondary erythromelalgia is given below in the table.

Abnormal hyperaggregability of platelets have been found in primary erythromelalgia. For erythromelalgia where thrombocythemia is not seen, the pathophysiology is less clear.

Following factors are thought to contribute to the pathophysiology

Following are the known triggers for erythromelalgia 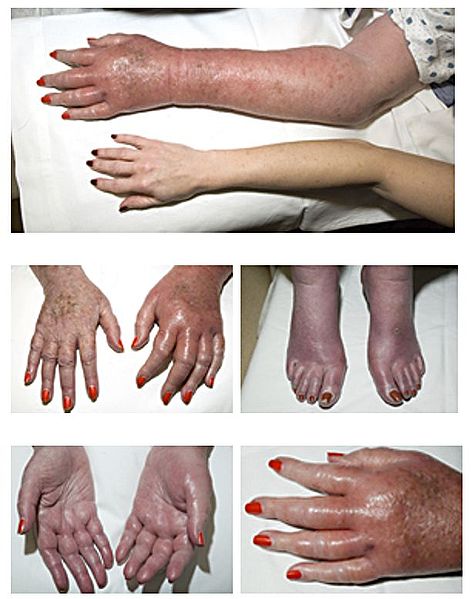 Both primary and secondary types of erythromelalgia are characterized by episodes of redness, warmth and burning sensation of the limbs.

The erythema varies from mild to moderate in severity and occurs wither with clear limits or not so well defined margins.

During the episode, the warmth can be felt by another person as well.

Pain is a burning or felt like an electric shock or a throb. Pain may be so intense that the patient cannot walk. Some patients describe that they need to keep their feet immersed in ice water.

The soles of feet and toes are most commonly involved. Rarely, the limb is involved as high as knees.

Involvement is usually bilateral but can occur in single-limb as well.

The warm environment can exacerbate symptoms whereas cooling and elevating the extremity can relieve symptoms.

Symptoms in the face, ears, and tongue have been reported.

A typical episode lasts about 2-3 hours. In between the episodes, the limb may appear normal or in some cases, cyanotic.

The condition has a tendency to become chronic and may result in appetite disturbances, anxiety, and depression

Patients may be unable to walk long distances or be in a standing position for a long time. Participation in physical activity like sports or dance may not be possible.

This may result in absence from school or work and resentment. In cases where episodes continue for a long time, bed rest and wheelchair may be needed.

In adults, the condition could be secondary and the patient should be asked about the history of pruritis, thrombosis, pain abdomen and constitutional symptoms associated with a myeloproliferative disorder.

But secondary erythromelalgia may occur 2-3 years before symptoms of myeloproliferative disorders and symptoms may always be not present. [This type of erythromelalgia responds dramatically to aspirin and this could aid in diagnosis].

Examination between episodes may be absolutely normal. The affected extremity becomes warm, tender, and appears dusky, red, and sometimes mottled.

Peripheral pulses may be normal or bounding. Cyanosis of fingers may be seen and may cause necrosis too.  Ischemic ulcers may be observed.

Check for splenomegaly and lymphadenopathy along with other relevant examinations for myeloproliferative disorders.

Edema and numbness in the limbs are observed in a small number of cases.

The skin might have lack of sweating [anhidrosis or hypohidrosis.]

With no specific diagnostic test available, maintaining a high index of suspicion is necessary to make the diagnosis.

The diagnosis of erythromelalgia is clinical. A high index of suspicion needs to be maintained. Investigations may aid to

A complete blood count can suggest the presence of myeloproliferative disorder.

It is important to look for a platelet count higher than 600 × 109/L and a hematocrit > 50%. An elevated granulocyte count could also suggest a myeloproliferative disorder.

X-rays of limbs are often normal. In the case of unilateral symptoms, bone scanning is warranted when there is a history of trauma or stroke.

Thermography can reveal striking differences in surface temperatures of involved and uninvolved areas but is not necessary.

Treatment of erythromelalgia is mainly supportive. There is no specific and effective treatment.

Local measures, such as cooling or elevating the extremity, may relieve symptoms.

Preventive measures should be followed. Exposure to triggers like excessive warmth, intensive physical exercise, smoking, and stress should be avoided.

The patient should do non-impact exercises like swimming or yoga. Peripheral vasodilator drugs are contraindicated

No specific dietary restrictions are necessary.

For primary erythromelalgia, the best treatment is unknown.

There are reports of many drugs being given including propranolol, epinephrine, sodium nitroprusside, gabapentin, typhoid vaccine, high-dose magnesium, intravenous bupivacaine, the lidocaine patch, and lidocaine plus mexiletine.

Topical applications are currently in development.

In secondary erythromelalgia, treatment of the actual disorder may cause improvement in symptoms.

For erythromelalgia with thrombocytosis, aspirin is usually the treatment of choice. It works by inhibiting platelet aggregation. Other NSAIDs also provide relief but for a shorter duration.

Anagrelide [inhibits cyclic nucleotide phosphodiesterase and leads to a decrease in platelet production] may be another choice.

Ticlopidine and dipyridamole are antiplatelet agents that have no effect. 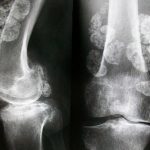 The guidelines are published by the Infectious Disease Society of America. These guidelines include evidence and opinion-based recommendations for the diagnosis and management of patients with native vertebral osteomyelitis treated with antimicrobial therapy, with or without surgical intervention. Native vertebral osteomyelitis in adults is often the result of hematogenous seeding of the adjacent disc space […]