These injuries are common in two distinct populations – young and elderly

In young patients, femoral neck fractures are also caused by high-energy trauma whereas in the elderly population, the fractures occur with insufficient trauma.

Stress fractures of the femoral neck are uncommon and occur in active individuals with unaccustomed strenuous activity or changes in activity, such as runners or endurance athletes, and elderly individuals with osteoporosis.

Insufficiency fractures are more common in females secondary to osteoporosis.

One of the unique features of femoral neck fractures is limited healing potential because the femoral neck is intracapsular, bathes in synovial fluid and lacks a periosteal layer. All these fractures contribute to poor healing.

Read more about the anatomy of hip joint and proximal femur

The femoral neck is part of the proximal femur and is a participant in the formation of the hip joint. It functions to connect the articular head of the femur to shaft.

The synovial membrane incorporates the entire femoral head and the anterior neck, but only the proximal half of the posterior neck. The shape and size of the femoral neck vary widely.

Read more about anteversion and retroversion

Displacement of femoral neck fracture disrupts the blood supply and may put the femoral head at risk of osteonecrosis.

The degree of fracture displacement determines the severity of damage to the major blood supply, the lateral epiphyseal artery system.

Intracapsular hematoma may elevate the capsular pressure which has an adverse effect on femoral head blood flow and may induce cellular death.

Anatomical reduction of femoral neck fractures has been shown to lower the risk of femoral head osteonecrosis. Second, stable fracture fixation allows revascularization to proceed in an optimal mechanical environment.

During walking or running, the load on the femoral neck can exceed 3-5 times the body weight when an individual is walking or running. Gluteus medius and minor muscles counterbalance the force of gravity on the hip joint.

The inferior aspect of the femoral neck faces these forces of compression leaving superior aspect with minimal effect.

However, on bending forward, stress is induced on the superior aspect of the femoral head.

Includes Garden I and II

(based on the vertical orientation of the fracture line)

Impacted and stress fractures may present as a slight pain in the groin or pain referred along the medial side of the thigh and knee. Displaced fractures present as pain in the entire hip region.

Displaced fractures would also show the inability to bear weight on the affected extremity and deformity of the lower limb.

On examination, impacted and stress fractures would show no obvious clinical deformity. Minor discomfort with active or passive hip range of motion may be noted. Muscle spasms occur at extremes of motion.

Displaced fractures have a leg in external rotation and abduction, with shortening

For the evaluation of stress fractures, a careful history is obtained to ascertain the cause.

If a person is an athlete, there may be a recent change in training or equipment. It could be an increase in mileage or intensity, change of the terrain, or running shoes.

Features common to all stress fractures include the following:

This test involves the patient hopping on the affected leg to reproduce symptoms. Other maneuvers that can place a stress on the femur also may reproduce pain. It is found to be positive in approximately 70% of patients with stress fractures of the femoral neck.

Not required for the diagnosis of traumatic fractures. May be required in case of evaluation of causes of stress fractures.

X-rays help to determine the site and extent of the fracture. However, a plain radiograph may appear normal in a patient with a femoral neck stress fracture.

If a femoral neck fracture is suggested, an internal rotation view of the hip may be done to identify nondisplaced or impacted fractures.

CT is helpful in determining the displacement and degree of comminution in some patients. It can also define bone lesions better than MRI in case of pathological fractures

MRI is helpful to rule out an occult fracture but cannot be relied upon for assessing the viability of femoral head after fracture.

It is also helpful to rule out occult fracture and when a stress fracture, tumor, or infection is suggested.

If the stress fractures are identified early and fracture is uncomplicated fractures rest and reversal any training errors may help to prevent progression of the fracture.

Compression stress fractures are more stable can be treated nonoperatively.

These undisplaced fractures are treated with bed rest and/or the use of crutches. The treatment is continued until passive hip movement is pain-free and there is an evidence of callus formation.

Close radiographic monitoring is required as the risk of displacement of the fracture is high. The clinician should obtain an x-ray film every 2-3 days the first week to detect any extension or widening of the fracture line. If pain does not resolve or if evidence of fracture line expansion is noted, internal fixation is indicated.

Immediate open reduction and internal fixation is indicated if the fracture starts widening.

Tension fractures are potentially unstable and may require operative stabilization.

In elderly patients,  observation alone may be considered in some patients who are non-ambulators, have minimal pain, and who are at high risk for surgical intervention

The treatment of a displaced fracture is based on the person’s age and activity level.

In the elderly population, cognitive function, walking ability, and independence in activities of daily living should be considered to arrive at an optimal method of surgical repair.

Closed or open reduction and internal fixation are indicated in displaced fractures in young or physiologically young patients [for most patients <65 years of age]. It is the most common surgical procedure performed in fracture of neck of the femur.

These are biomechanically superior to cannulated screws and is  indicated in

This is done in elderly patients.

Hemiarthroplasty [ Replacement of femoral part of hip-joint only] – in the hip with without arthritis.

Total hip arthroplasty is considered in patients with preexisting hip osteoarthritis. It provides better pain relief and a better functional outcome than hemiarthroplasty in arthritis hips.

The incidence of osteonecrosis is 10-45%. The risk increases with initial displacement.

Varus malreduction most closely correlates with failure of fixation after reduction and cannulated screw fixation.

Treatment options in nonunion are

The higher rate of dislocation with total hip arthroplasty than hemiarthroplasty

Patients with Parkinson disease who sustain a femoral neck fracture, present a special challenge as morbidity and mortality rates are much higher.

To decide on an appropriate treatment plan, it is essential to consider the status of the disease and view cases individually.

In cases of nondisplaced or impacted fracture, a patient of any age or disease severity should be treated with multiple-screw fixation and early mobilization.

Young and active with displaced femoral neck fractures with the well-controlled disease should be treated by anatomic reduction and internal fixation.

Delayed union and nonunion are common sequelae of fractures in Paget’s disease.

The treatment of choice for displaced femoral neck fractures in Paget’s disease is a primary prosthetic replacement.

Treatment of these patients may be problematic because of osteopenia, spasticity, and/or contracture.

Because of the high rate of nonunion, primary prosthetic replacement appears to be the treatment of choice for femoral neck fractures in patients with chronic renal failure. 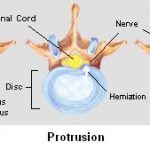 The femur is also called the thigh bone and is the longest and strongest bone of the body. It is composed of an upper end, a lower end and a shaft. The upper and bears a rounded head, whereas the lower end is widely expanded to from two large condyles. The head is directed medially. The […]

Lower back pain can result from muscles and tendons of the back, nerve roots, joints of spine and viscera. Few of these lower back pain are acute … END_OF_DOCUMENT_TOKEN_TO_BE_REPLACED