The femur is also called the thigh bone and is the longest and strongest bone of the body. It is composed of an upper end, a lower end and a shaft.

The upper and bears a rounded head, whereas the lower end is widely expanded to from two large condyles. The head is directed medially. The cylindrical shaft is convex forwards. 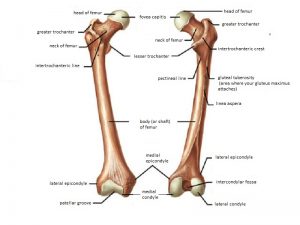 Head articulates with acetabulum to form a hip joint. It is more than half a sphere and is directed medially, upwards and slightly forwards.

The fovea is a roughened pit just below and behind the center of the head. Head, in its most part, is covered by cartilage.

The neck is about is about 3-3.5 cms long and connects head with the shaft. The neck forms an angle with the shaft, known as neck-shaft angle and is about 125 in adults [lesser in females]. The angle facilitates movements of the hip joint. The femoral neck is strengthened by a thickening of bone called the calcar femorale present along its concavity.

The neck has two borders and two surfaces

The posterior surface is convex from above downwards and concave from side to side. It meets the shaft at the intertrochanteric crest. It is not intracapsular in its lower lateral part.

Anteversion is the angle formed between the transverse axis of the upper and lower ends of the femur. It is about 15 degrees.

The greater trochanter is a large quadrangular prominence located at the upper part of the junction of the neck with the shaft. The upper border of the trochanter lies at the level of the center of the head.

The greater trochanter has an upper border with an apex, and 3 surfaces (anterior, medial and lateral). The apex is the inturned posterior part of the posterior border. The anterior surface is rough in its lateral part. The medial surface presents a rough impression, above and a deep trochanteric fossa, below. The lateral surface is crossed by an oblique ridge directed downwards and forwards.

It is a conical eminence directed medially and backwards from the junction of the posterior part of the neck with the shaft.

It marks the junction of the neck with the femur. It is a roughened ridge from the anterosuperior angle of the greater trochanter (as a tubercle) and is continuous below with the spiral line in front of the lesser trochanter.

The spiral line is a curved line with its superior end adjacent to the lesser trochanter, nearly continuous with the intertrochanteric line, and converging inferiorly with the pectineal line to form the medial lip of the linea aspera.

It forms the medial boundary of the distal attachment of the iliacus muscle. The spiral line winds around the shaft below the lesser trochanter to reach the posterior surface of the shaft.

It marks the junction of the posterior surface of the neck with the shaft of the femur. It is a smooth rounded ridge which begins above at the posterior superior angle of the greater trochanter and ends at the lesser trochanter. The rounded elevation, a little above its middle is called the quadrate tubercle.

The shaft is almost a cylindrical structure wide superiorly and inferiorly and narrowest in the middle. It is convex forwards and is directed obliquely downwards and medially.

The shaft in middle one-third has three borders -medial, lateral and posterior. The medial and lateral borders are rounded and ill-defined, but the posterior border is in the form of a broad roughened ridge, called the linea aspera. Linea aspera is an important landmark in orthopedics surgeries involving reduction of femoral fractures.

The shaft possesses 3 surfaces as well – anterior, medial and lateral.

In upper one-third of the shaft, he two lips of the Linea aspera diverge wide to form an additional posterior surface and four borders (medial, lateral, spiral line and the lateral hip of the gluteal tuberosity) and 4 surfaces (anterior, medial, lateral and posterior).

The gluteal tuberosity is a broad roughened ridge on the lateral part of the posterior surface.

The lower end of the femur is wide and expanded. It has two large condyles –  medial and lateral. Anteriorly, the two condyles are united and are in a line with the front of the shaft. Posteriorly, they are separated by a deep gap, termed the intercondylar fossa or intercondylar notch, and project backwards much beyond the plane of the popliteal surface.

The lateral condyle is flat laterally, less prominent than medial condyle and stouter than it. It has a prominence called the lateral epicondyle. Below it lies the popliteal groove with a deeper anterior part and a shallower posterior part.

Medial condyle is convex medially. It also bears a prominent point called the medial epicondyle. Adductor tubercle is a projection posterosuperior to the epicondyle which serves as an important landmark.  The epiphyseal line for the lower end of the femur passes through it.

Attachments on the Femur

The fovea on the head of the femur provides attachment to the ligament of the head (round ligament, or ligamentum teres).

One primary and four secondary centers.

The primary center for the shaft appears in the 7 weeks of intrauterine life.

The secondary centers appear as follows

The upper apophyses (lesser trochanter, greater trochanter and head, in that order) fuse with the shaft at about 18 years. The lower epiphysis fuses by the 20th year. 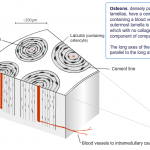 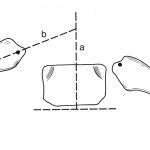 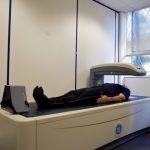