Fibromyalgia or fibromyalgia syndrome is a disorder that is characterized by widespread musculoskeletal pain, fatigue, sleep disturbances, memory problems, allodynia, and mood alterations. Difficulty in swallowing. bowel and bladder abnormalities, paresthesia and cognitive dysfunction have also been reported to occur in some patients
Symptoms may begin after a physical trauma, surgery, infection or significant psychological stress. In many cases, symptoms gradually accumulate over time with no single triggering event.

Fibromyalgia is more common in females and typically occurs in young or middle-aged women.

Fibromyalgia is often associated with depression, anxiety, and stress-related disorders such as posttraumatic stress disorder.

Not all people with fibromyalgia experience all symptoms.

The cause of fibromyalgia is unknown. Central sensitization hypothesis says that there is a lower threshold for pain in fibromyalgia patients because of increased reactivity of nerve cells in the brain or spine.

The pain in fibromyalgia results primarily from pain processing pathways functioning abnormally. The exact cause is unknown but psychological, genetic, neurobiological and environmental factors contribute.

Fibromyalgia runs in some families and probably has a polygenic inheritance. Polymorphisms of genes in the serotoninergic, dopaminergic and catecholaminergic systems have been associated with fibromyalgia. These genes are also associated with other disorders like chronic fatigue syndrome, irritable bowel syndrome, and depression.

Stress could be an important factor in the development of fibromyalgia. Stress-related disorders such as chronic fatigue syndrome, posttraumatic stress disorder, irritable bowel syndrome, and depression are associated with fibromyalgia.

Abuse – sexual or physical, smoking, obesity, and lack of physical activity are thought to increase the risk of fibromyalgia.

It is postulated that exposure to stressful conditions can alter the function of the hypothalamic-pituitary-adrenal axis, which affects the development of fibromyalgia.

Central sensitization causes a lower threshold for pain in fibromyalgia patients because of increased reactivity nerve cells in the brain or spine and fibromyalgia results from abnormal function of pain processing pathways.

Some neurochemical abnormalities that occur in fibromyalgia also regulate mood, sleep, and energy, thus explaining the occurrence of these disturbances in fibromyalgia.

The pathogenesis of fibromyalgia is not clear yet but biochemical, metabolic, and immunoregulatory abnormalities have been found which lead to central sensitization or abnormal central processing of nociceptive pain input.

There is suppression of the normal activity of dopamine-release and fibromyalgia may represent a dysregulation of dopaminergic neurotransmission.

Low serotonin levels have been observed in patients with fibromyalgia. It is a neurotransmitter linked to sleep, pain perception, headaches, and mood disorders.

Low levels of adenosine triphosphate are found in red blood cells of patients with fibromyalgia. And this may be a cause of low platelet serotonin levels.

Dysfunction of the Hypothalamic-Pituitary-Adrenal Axis

Hypothalamic pituitary adrenal axis is critical for a stress-adaptation response.

Regulation and the stress-induced stimulation of the axis are, in part, regulated by serotonin and altered serotonin levels may explain the abnormalities of the hypothalamic-pituitary-adrenal axis in fibromyalgia.

Growth hormone is produced during the sleep esp. stage IV of NREM sleep. Disrupted stage IV sleep can cause low levels of growth hormone which in turn decrease insulin-like growth factor I in the liver and tissue repair.

There is a link between poor sleep and increased pain, along with feeling fatigued and distressed.

The disordered sleep physiology in fibromyalgia has been identified as a sleep anomaly of alpha-wave intrusion during NREM stage 4 sleep which causes the patient to awaken or to be aroused to a lighter level of sleep.

Sleep problems occur in fibromyalgia due to metabolic imbalances which cause impairment of tissue repair and disturbance of the immunoregulatory role of sleep.

Presentation – Symptoms and Signs of  Fibromyalgia

There is a history of long-standing pain [>3 months] and tenderness. The pain and tenderness are widespread meaning that these are present on both sides of the body, above and below the waist, including the axial spine.

Fibromyalgia patients have significant symptoms of fatigue, unrefreshed sleep, and difficulties with thinking and remembering.

Approximately one-third of patients identify a specific event like illness, stress or injury that precipitated the development of fibromyalgia.

Control sites are forehead, a distal middle third of the right forearm and nail of the left thumb.

Other nine pairs [4 anterior and 5 posteriors] sites are as follows:

On palpation of tender points, the patient is asked to rate the intensity of 0-10 [Pain severity score of at least 2 required to count a tender point as positive]

For examination, enough pressure should be applied by thumb so as to blanch the nail.

Average of pain scores from tender-point sites provides fibromyalgia Intensity Score which can be monitored to evaluate response to therapy over the time.

Pressure algometer is a device to assess pain thresh at 4 tender points associated with fibromyalgia (ie, both lateral epicondyles, midpoints of the trapezius). Normal values are 4 kg/cm2 or greater.

In addition to complete blood cell count and differential count, basic metabolic panel, and urinalysis, thyroid-stimulating hormone, 25-Hydroxyvitamin D level, vitamin B-12 level, iron studies, and magnesium levels should be done. Deficiency of first two can cause vague pains, next two fatigue and magnesium deficiency can cause spasms.

The erythrocyte sedimentation rate is a nonspecific measure of inflammation and mild elevations may not be meaningful.

Formal sleep studies may be useful in patients whose sleep does not improve with the usual conservative measures.
Antipolymer antibodies in the blood are present in approximately 50% of patients with fibromyalgia and it can be taken as a biologic marker a subgroup of people with fibromyalgia.

The psychometric analysis is useful for a more comprehensive assessment.

Fibromyalgia is a diagnosis of exclusion and patients must be thoroughly evaluated for the presence of other disorders that could be the cause of symptoms.  Following conditions should be considered in differential diagnoses of fibromyalgia.

The patient should be made aware that there is no cure for fibromyalgia, and education, lifestyle, physical activity, and proper medications can lead to achieving significant improvement.

There is no specific drug for fibromyalgia.

Anticonvulsants like including gabapentin, tiagabine, and pregabalin help in pain relief and disturbed sleep and depression.

For coexisting inflammations, NSAIDs and steroids are used. Heat, massage, and other treatments are useful

Opioid analgesics are generally not recommended but are beneficial in patients with fibromyalgia who have severe allodynia.

Nabilone [Synthetic cannabinoid] is effective in improving pain and anxiety in fibromyalgia. Beta-blockers like pindolol or propranolol improve pain and agitation when given at bedtime.

Antianxiety agents are often used in combination with antidepressants and anticonvulsant drugs and include benzodiazepines like [alprazolam, temazepam, clonazepam,] buspirone, and trazodone.

Cyclobenzaprine is a muscle relaxant effective in fibromyalgia and improves sleep disturbances.

Psychotherapy, exercise, relaxation techniques, and education are generally sufficient in children with fibromyalgia. Drugs are often not required.

Psychological and behavior therapy should be given to reduce anxiety, stress, and sleep. Depression must be treated. Encouragement and positive reinforcement can improve compliance.

Aerobic, endurance, and strength training are part of the treatment program. Apart from the improvement in pain, these also give a sense of well being.
Obesity, poor posture, and overloading activities at work and at home should be addressed.

Patients should learn to identify the factors that trigger flare-ups and what measures to take to decrease their symptoms. Infection, dietary change, a significant change in activity, lack of sleep and new medicine are frequent causes of flare up.

Poor sleep contributes to pain, depression, and fatigue. The patient should avoid caffeine, alcohol, and large evening. Fluid should be restricted to avoid urinary frequency problems.
A sleep diary maintained by the patient about the time of going to bed, approximate time of falling asleep, number of awakenings and number of times the patient got out of bed; provides helps in medicine selection.

The patient is advised to stop using refined sugars, white flour, aspartame, and monosodium glutamate. Carbohydrates should be restricted and green leafy vegetables and citrus fruits should be preferred. 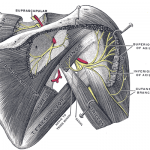