Hemarthrosis is a medical term for bleeding into the joint cavity. It literally means blood in the joint. Acute hemarthrosis can occur with trauma or as a complication of blood disorders such as hemophilia.

The most common joints affected are the knees, ankles, and elbows but other joints can be affected as well.

With management, a joint that has suffered an acute hemarthrosis generally returns to normal. But the repeated bleeding may lead to chronic changes in the joint like synovitis, arthritis, and progressive arthropathy.

It is therefore important to understand the condition and its successful management to minimize the complications.

Hemophilia, is a disorder marked by clotting factor VIII or IX being defective or missing, leading to frequent episodes of bleeding in various parts of the body including joints.

The severity of bleeding varies and determines the likelihood of developing chronic changes.

The joint where repeated bleeding occurs is called the target joint.

Other blood coagulation issues that may lead to hemarthrosis are

Osteoarthritis is rarely responsible for bleeding in the joint.

Painful joint swelling is the most common presentation. The patient may complaint of acute pain if the bleeding is large or a dull ache.

On examination, the swelling would be warm to the touch and tender.

The skin over the swelling may exhibit some redness but is not always present.

There would be a decrease of range of motion.

The patient may have a history of trauma or the swelling may be spontaneous.  A history of similar previous episodes points to hemophilia.

Check if the patient is on any anticoagulant therapy.

Fever and the presence of systemic signs in a child should raise the suspicion of septic arthritis.

The history and physical examination would guide the physician for the next line of investigation.

All young patients with joint swellings should be considered for hemophilia investigation if not already done.

Complete blood count, ESR, and CRP would indicate if there is a presence of infection. Septic arthritis in young infants is common and should be differential diagnoses in joint swellings.

Joint aspiration is the most helpful investigation.

In the case of hemarthrosis, Aspiration would yield bloody synovial fluid which may appear red, pink, or brown depending on the quantity of blood and freshness of bleed.

In some cases, gross blood is visible.

A normal appearing fluid may show RBCs on microscopic examination.

In case the cause is pre-known [injury, hemophilia] the joint aspiration is not needed.

The withdrawn fluid may be subjected to cytological and biochemical analysis.

X-ray of the joint would reveal the status of joint. In the case of recurrent episodes, the joint may have been undergoing destructive changes.

X-rays also reveal any bony injury or other pathologies.

MRI of the joint is not regularly needed but only in cases where the joint changes are visible and further details are sought.

Hemarthrosis per se, in absence of a joint problem, does not require any further treatment. Treatment of the cause would relieve the patient of hematoma.

Symptomatic and supportive treatment is warranted till then.

The swollen joint is quite painful. The drugs for pain are NSAIDs and opioids. NSAIDs are contraindicated in conditions where platelet count is reduced i.e. bleeding disorders.

Rest, ice, compression, and elevation can be used in acute hemarthrosis generally but a prolonged rest is to be avoided as it poses a risk for muscle atrophy and contracture formation.

The period of rest would depend on the cause of hemarthrosis.

Ice should be applied only after adequate factor replacement is administered as it also slows the blood flow.

A compression and limb elevation may decrease swelling.  limit swelling is a good idea in theory but is not practical for young, active children.

It is indicated only in very severe bleeding to decrease the load on the joint.

When joint bleeding and synovitis are poorly controlled, synovectomy is effective in removing inflamed and hypertrophic synovium, thus decreasing the propensity for repeated joint hemorrhage.

Surgical synovectomy can be open or arthroscopic.

Radionuclide synovectomy involves the intra-articular injection of a radionuclide to induce fibrosis.

In the case of hemophilia, appropriate measures should be done to control further bleeding. The most important step is the clotting factor administration.

Definitive treatment of the condition depends on the causative disease. 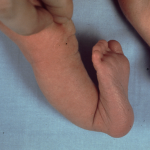