Hemophilic arthropathy refers to the changes in joints caused by recurrent bleeding into joint due to a bleeding disorder called hemophilia.

Hemophilia is a genetic disorder characterized by abnormality of the coagulation mechanism due to functional deficiency of a specific blood factor, namely VIII or IX.

There are various types of hemophilia

Hemophilia is characterized by repeated episodes of bleeding. The severity  varies from patient to patient and depends on levels of the deficient factor.

Joints are the most frequent sites of repeated bleeding followed by muscles and soft tissues.

The weight-bearing joints are most commonly affected.

The vertebral column is rarely involved.

Following injury, the synovial vessels rupture, and blood accumulates in the joint. Bleeding continues until the intraarticular hydrostatic pressure exceeds that of the arterial and capillary pressure in the synovium. This causes ischemia of the synovium and subchondral bone.

With repeated hemorrhage, hyperplasia and fibrosis of the synovium ensue.

Subchondral bone cysts are formed due to local ischemia.

An attempt to repair may lead to asymmetrical growth, resulting in valgus or varus deformity.

Early closure of physis may lead to limb shortening.

Osteoporosis and muscle atrophy are common.

The final phase of hemophilic arthropathy is fibrous ankylosis.

Clinical features of hemophilic arthropathy depend on the severity of hemorrhage and whether the bleeding in the joint is acute, subacute, or chronic.

General findings on X-ray are

MRI is good for early detection of the disease.

A bone scan is sensitive for detecting the scope of skeletal involvement. They can be used to monitor treatment response

The classification is based on radiographs.

The main concern in hemophilic arthropathy is spontaneous bleeding.  The aim of the treatment is to prevent bleeding by replacement of deficient factor with a concentrate of the clotting factors obtained from fresh frozen plasma. The factors given are

Administration of the factor is continued for three to seven days following cessation of bleeding.

The affected joint is temporarily immobilized in a position of rest and minimum intraarticular pressure.

Compression helps to create tamponade and reduce further bleeding but distal circulation should be carefully watched.

Under no circumstances should a circular plaster cast be used to avoid circulation compromise.

Analgesics or sedatives are best avoided.

NSAIDs are contraindicated due to an inhibitory effect on platelets.

Repeated use of opioid drugs in addiction can be a problem with repetitive use. However, in case of need opioid drugs may be given but they should be used conservatively.

The joint should be aspirated and decompressed if there is severe hemarthrosis with marked distention of the joint capsule.

Aspiration of the joint should be performed under strict aseptic conditions. After the aspiration, the compression dressing and posterior splint are reapplied.

After cessation of bleeding, physical therapy to mobilize the joint is initiated. This involves

The treatment depends on whether the arthropathy is acute or chronic.

Prolonged immobilization of the affected joint should be avoided, as this results in marked muscle atrophy and restriction of joint motion.

Chronic condition results after repeated acute hemophilic arthropathy. This condition is preventable in most cases by effective and immediate treatment of acute hemarthrosis.

In the management of chronic hemophilic arthropathy, physical therapy, traction, orthoses, traction, and surgery play an important role. Treatment needs to be individualized. The objective is to correct joint deformity and to restore function.

If deformities caused by hemarthrosis cannot be corrected by conservative closed methods, surgical correction is indicated.

The factor level should be raised to 100 percent by infusion of factor concentrate in perioperative period.

Synovectomy is done to prevent progression of hemophilic arthropathy. It helps by

Synovectomy is indicated in

In stages IV and V, synovectomy is not effective and contraindicated.

Total hip replacement is indicated in Stage IV or Stage V hemophilic arthropathy when pain is persistent with a severe disability not relieved by conservative measures. Arthroplasty of the elbow has been reported.

Arthrodesis of the ankle, subtalar and midtarsal joints in the foot, shoulder, or knee may be indicated when these joints are destroyed. 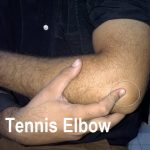