Commonly affected joints are the sacroiliac joints but other parts of the spine are affected as well. Large peripheral joints can as well be affected.

Over the time the inflammatory back pain may cause ankylosis. 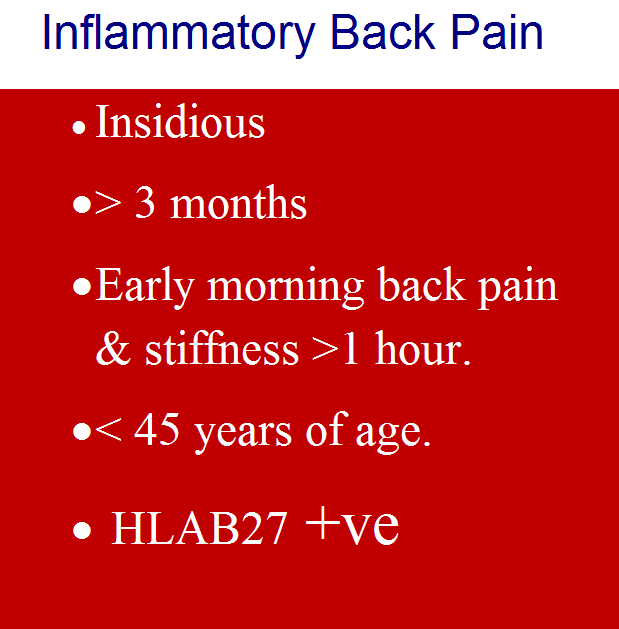 Features of Inflammatory Back Pain

Inflammatory back pain is characterized by

Routine lab tests may show inflammation – ESR and CRP are elevated. HLA B27 is positive in the majority of the patients.

HLA B27 stands for Human Leukocyte Antigen B27 and is a surface antigen that presents antigenic peptides to T cells, the body’s natural defense cells. HLA-B27 is strongly associated with ankylosing spondylitis, and other associated inflammatory diseases referred to as spondyloarthropathies.

It is not entirely clear how HLA-B27 influences disease.

X-rays are essentially normal in early phases of diseases causing inflammatory back pain. Arthritic changes of the involved joints [for example sacroiliac joints] can be noticed in the later course of the disease.

MRI of the spine is able to find the joint inflammation much earlier and is an investigation of choice in patients with symptoms suggestive of inflammatory back pain.

The first objective in a patient with inflammatory back pain is to reach the definitive diagnosis. This may be delayed for various reasons.

The patient is put on medication to control inflammation such as NSAIDs. The patient should also be put on exercises to maintain spinal function, initially under the supervision of a physiotherapist and then independently.

When a definite diagnosis is reached at, the patient is treated accordingly.

Slipped femoral capital epiphysis is the disorder of the proximal femoral physis that leads to slippage of the epiphysis relative to the femoral neck. It is one of commonest hip abnormalities in adolescence. It affects both the hips in about 20% of cases. The incidence for slipped capital femoral epiphysis is about 10 cases per […]

Charcot joint or Charcot arthropathy is the name given to neuropathic joint disease is a condition that causes progressive destruction of bone and soft tissues of joints especially weight-bearing joints and may also cause disruption of the bony architecture. Charcot joint disease can occur at any joint but most commonly in the lower extremity, at […]