The Intervertebral disc is a kind of cushion-like structure between two vertebrae that absorbs the forces across the vertebra and provide cushion during motion of vertebrae, thus preventing grinding of vertebrae against each other.

Discs are avascular structures and receive nutrition via osmosis from surrounding structures.

They are in fact the largest structure of the body without blood supply. Discs are attached to vertebral bodies by hyaline cartilage.

On x-ray, the disc is not visible but a gross idea about its height can be made by looking at intervertebral space, which is space between two vertebrae.

Each disc is made up of two parts: the annulus fibrosus and the nucleus pulposus.

The disc is sandwiched between two vertebral bodies. The discs are in contact with vertebral endplates. Vertebral endplates have a cortical rim and compressed cancellous bone in the central disc area, which covers nearly 70% of the disk.

The outer 30% consists of dense cortical margin and is the strongest area of the endplate.

Annulus or anulus is the word derived from the Latin word anus which means ring. The annulus is a ring-like tough structure that surrounds and encases the other structure of the intervertebral disc, called the nucleus pulposus.

The annulus is made of water and type I collagen fibers. These fibers are oriented at different angles horizontally to create strength. Water and proteoglycans are other constituents.

Multiple layers of collagen fibers arranged in a unique circumferential orientation along the disc periphery. Each layer is called lamella.

Each lamella is oriented at a 30-degree angle to the horizontal axis of the disc, and this pattern alternates in successive lamellae. The outer collagen fibers attach to the ring apophysis, and the inner layers attach to the endplate surround the nucleus.

Fibroblast-like cells are responsible for producing type I collagen and proteoglycans.

It is gel-like elastic substance within the annulus fibrous and is composed of the same material as annulus fibrosis – water, collagen, and proteoglycans but in different concentrations and structural arrangements.

This hydrophilic matrix provides the height of the intervertebral disc and makes it compressible enough.

Viscoelastic matrix makes annulus fibrous elastic and enables the distribution of the forces smoothly to the annulus and the endplates.

It contains chondrocyte-like cells which are responsible for producing type II collagen and proteoglycans and allows to tolerate hypoxic conditions.

Thus, overall, the disc gradients from the fibrous well-organized periphery to the randomly organized gelatinous center.

Physiologically, chondrocytes and fibroblastic cells are responsible for production and constant remodeling of the principal components of the extracellular matrix collagen and proteoglycans.

Sinuvertebral nerve originates from the dorsal root ganglion gives rise to the innervates the superficial fibers of the annulus.

The disc is not innervated beyond the superficial fibers

The intervertebral disc is avascular because the capillaries terminate at the vertebral endplates. The nutrition reaches the nucleus pulposus through diffusion through pores in the endplates

The nutrition of these cells is derived from diffusion across the hyaline cartilage and subcortical endplates.

The cells in the central part of the disc lie closest to the endplate. By virtue of their position they lie nearest to vascular supply and are responsible primarily for nutrient and waste product exchange. The ultrastructure of the bony endplate comprises numerous sinusoids with specialized loops of capillaries that come into close contact with the underlying cartilaginous layer.

Simple diffusion of molecules across the cartilage occurs depending on the size of small nutrients. As there is anaerobic metabolism due to the anaerobic avascular nature of the disc, the latent pH within the disc under normal conditions is acidic.

Disc Load and Changes in Hydration

This converts the compressive load on the nucleus to a radially directed force with tensile stress to the annulus.

Constant load on the disc applies pressure to the nucleus, reducing the ability of the proteoglycans and, thus, the nucleus to hold water, causing creep of the disc.

After pressure is relieved, the time-dependent viscoelastic properties of the disc nucleus allow it to retain water.

The annular fiber orientation within the lamellae allows for resistance to tension. Because lamellae are oblique, it results in tension or relaxation of the fibers in different areas within the disk and with different forces. The phenomenon is called anisotropy.

Changes in Disc with Movements

In the anterior or posterior translation of a vertebral body and disc along the horizontal axis, all of the fibers of the annulus are stretched in the direction of the applied force.

However, fibers aligned in the direction of the force will undergo stain while the remaining fibers actually will be brought closer to one another and will relax.

This alternating tension and relaxation with translation and axial rotation maintain the stability of the intervertebral segment.

Anterior flexion of sagittal plane rotation causes the anterior annulus compression. The nucleus also is compressed eccentrically over its anterior aspect, after which it deforms and migrates posteriorly. The posterior annular fibers expand radially the shifting nucleus, and the fibers stretched in line with these forces resist further motion.

As rotation occurs, the weight of the upper body and trunk lead to shear strain forces at the disc and slight translation, which is resisted by the active and passive constraints of the posterior column, may occur.

Aging of disc leads to an overall loss of water content and there is conversion to fibrocartilage. THis leads to the reduction in disc height.

There is a decrease in nutritional transport along with a decrease in water content. The pH becomes acidic and there is a reduction in the number of viable cells and proteoglycans.

Along with that, there is an increase in keratin sulfate to chondroitin sulfate ratio, lactate. the activity of enzymes causing degradation decreases.

Also called disc herniation or slipped disc. In this condition, the nucleus pulposus along with protrudes out from a weakness in the annulus fibrosus and indents on the nerve root in the vicinity.

This condition can lead to radiating pain in the lower limb, commonly known as sciatica.

The bulge is usually posterior, especially in the lateral area.

Schmorl nodes are another kind of herniation, where the nucleus pulposus, herniates on vertebral endplates.

This is referred to as vertical disc herniation.

In degeneration, the nucleus pulposus begins to dehydrate and the concentration of proteoglycans in the matrix decreases. This limits the ability of the disc to absorb shock. The annulus fibrosus also becomes weaker with age and has an increased risk of tearing.

Sclerosis of the bones underlying the endplates also occurs. 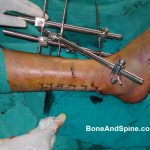 Intraoperative blood salvage is a type of autotransfusion or transfusing patient’s own blood instead of allogenic blood retrieved from blood donors. It is also known as autologous blood transfusion or cell salvage. It is a medical procedure involving recovering blood lost during surgery and reinfusing it into the patient. In other words, the blood that […]