Leri Weill Dyschondrosteosis is a type of dysplasia associated with Madelung deformity. Madelung’s deformity is an abnormality of the wrist caused by a growth disturbance that retards the development of the ulnar and volar portions of the distal radial physis.

The eponym gives credit to Otto W. Madelung, who described this entity. Carpus curvus, radius curvus, and progressive subluxation of the wrist, manus valgus, and manus furca are other terms used for this condition.

The primary deformity is bowing of the distal end of the radius, which is the most typical form curves in a volar direction while the ulna continues to grow in a straight line. The distal ends of the radius and ulna are at different levels in the lateral plane. That of the ulna has maintained its original normal position, while that of the radius has curved down to a volar level.

The height of these patients is usually is less than the 25th percentile. The features become more pronounced clinically during adolescence.

No other abnormalities are commonly associated.

Forearm shortening is bilateral and appears almost identical to that in primary MD. One of the differentiating features is that the proximal radius is involved in patients with Leri Weill dyschondrosteosis whereas it is not involved in primary Madelung deformity.

Both dyschondrosteosis and Madelung deformity are transmitted in an autosomal dominant fashion and the diseases are more predominant in females.

It appears that while they may be related but are separate entities. In primary Madelung deformity without Leri Weill dyschondrosteosis the height of the child is above the 25th percentile in height and there would be no family history of dyschondrosteosis.

A patient who is less than 5 feet tall at skeletal maturity with the involvement of the proximal radius with a relatively short tibia and fibula is likely to have Leri Weill dyschondrosteosis.

Sinding Larsen Johansson disease [ also known as Sinding-Larsen disease or Larsen-Johannson syndrome] is a type of osteochondrosis that affects the proximal end of the patellar tendon as it inserts into the inferior pole of the patella, and represents a chronic traction injury or overuse injury of the immature osteotendinous junction. It is a closely […] 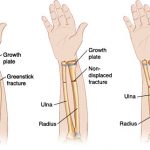