Maffucci syndrome is a rare disorder is characterized by enchondromas, bone deformities with venous malformations with or without spindle cell hemangiomas.

The condition was first reported by Maffucci in 1881. There is no racial or sexual predilection.

It usually manifests early in life, usually around age 4-5 years. About one-fourth of the cases are congenital. But familial inheritance is not seen.

Only less than 150 cases of this syndrome have been reported.

Maffucci syndrome has been shown to be associated with heterozygous somatic mutations in the isocitrate dehydrogenase 1 and 2 (IDH1/IDH2) genes.

The syndrome mainly affects the skin and skeletal systems. Venous malformations often protrude as soft nodules or tumors. These are usually seen on the distal extremities, unilateral or bilateral but they can appear anywhere.

The lesions are compressible, soft, red-blue papules and nodules.

Thrombi often form within vessels and develop into phleboliths.

Venous malformations have also been reported in sites other than skin. These are the leptomeninges, eyes, respiratory tract, and GI tract. The cutaneous vascular malformations may also be present on mucosal surfaces.

Enchondromas mainly occur in small tubular bones and the long bones though they may occur anywhere. These lead to bony deformities and secondary fractures. Fracture malunion may occur. malunion of fractures.

Transformation to chondrosarcoma is seen in about 30% of patients.

Other malignancies associated are

Parents often notice soft, blue-colored growths on the distal aspects of the extremities.

The children usually are short statured. Patients with Maffucci syndrome are usually short in stature and may have unequal arm or leg lengths due to the bone abnormalities.

Enchondromas usually involve small bones of hand and feet but occur in long bones too.

Walking and use of objects may be affected.

Patients need to be watched for complications. Malignant transformation to chondrosarcoma is most dreaded and present in about 30% cases. Fracture and limb inequality are others.

Maffucci syndrome can be diagnosed on clinical presentation and radiological imaging.

X-rays will reveal findings suggestive of enchondromas. Skeletal surveys can be undertaken for ascertaining the bones involved.

Differentiation from chondrosarcoma is important and the patient is followed regularly to recognize any changes occurring over the course of life.

Clinically the malignant changes are suspected by an increase in size and pain. On x-rays,  cortical destruction, endosteal cortical erosion, and zones of lucency within a previously mineralized area are signs suggestive of malignant change.

CT and/or MRI, while routinely not done, are able to provide better information about the lesion and its surrounding soft tissue.

A needle biopsy should provide a diagnosis which would reveal poorly differentiated pleomorphic chondrocytes.

Patients who are without symptoms do not require any treatment. Patients are kept in follow up to to evaluate any changes in the skin and bone lesions.

Venous malformations management depend on their severity of symptoms and the severity of the lesion.

Nd: Yag laser may be efficacious for small, superficial lesions.

Surgical excison is considered when other treatments fail.

The treatment decision is made by taking into account the location, number and progression of the lesions, and potential complications.

patients manage to perform activities of daily living rather well. Some times bone deformities may cause restraints. 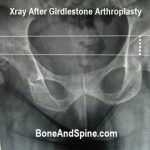