The menisci are also known as semi-lunar cartilages because of their crescent shape.

Not very long ago, menisci were thought to be mere shock absorbers and were frequently removed in case of injury.

But deterioration of articular cartilage and the gradual development of arthritis following meniscus removal changed the mindset towards the preservation of meniscus.

Both menisci are critical components of a healthy knee joint. 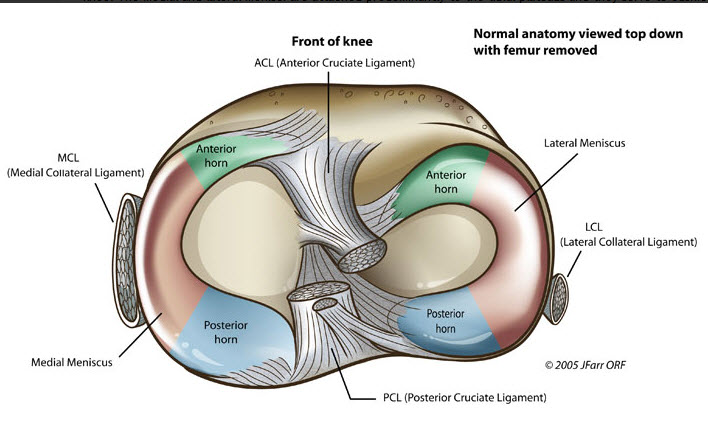 Menisci are crescentic, fibrocartilaginous, smooth glossy-white, crescent-shaped tissue that attach to the intercondylar area and periphery of the tibial plateau. Lateral meniscus display greater variety in size, shape, thickness, and mobility than medial.

The medial meniscus is nearly semicircular, being wider behind than in front. The posterior fibers of the anterior end are continuous with the transverse ligament. Its peripheral margin is adherent to the deep part of the tibial collateral ligament.

The lateral meniscus is nearly circular. The posterior end of the meniscus is attached to the femur through two meniscofemoral ligaments. The tendon of the popliteus and the capsule separate this meniscus from the fibular collateral ligament.

The meniscofemoral ligaments are also known as the Humphrey and Wrisberg ligaments. They connect the posterior horn of the lateral meniscus to a location near the insertion site of the posterior cruciate ligament on the medial femoral condyle.

Only 46% of people have both of these ligaments but each one of us has at least one of them.

Contraction by the popliteus during knee flexion pulls the lateral meniscus posteriorly, avoiding entrapment within the joint space.

The medial meniscus does not have a direct muscular connection.

Menisci are stabilized by

The proportion may vary with age.

Different types of collagen exist in varying quantities in each region of the tissue.

Aggrecan, biglycan, and decorin are the proteoglycans found in meniscus enabling the meniscus to absorb water.

Adhesion glycoproteins fibronectin serve as a link between extracellular matrix components and cells.

During early development, all meniscus cells present the same cellular morphology but then with development, changes occur in the cells.

The outer zone cells have an oval, fusiform shape and are similar in appearance and behavior to fibroblasts [fibroblast-like cells]

Cells in the inner portion of the tissue appear more round and more like cartilage cells. These are classified as fibrochondrocytes or chondrocyte-like cells.

The menisci follow the motion of the femoral condyle during knee flexion and extension.

During extension, the femoral condyles exert a compressive force displacing the menisci anteroposteriorly. As the knee moves into flexion, the condyles roll backward onto the tibial plateau. The menisci deform mediolaterally, maintaining joint congruity and maximal contact area. As the knee flexes, the femur externally rotates on the tibia, and the medial meniscus is pulled forward.

The menisci are important in load-bearing, load transmission, shock absorption, as well as lubrication and nutrition of articular cartilage.

Being wedge-shaped, these help in stabilizing the curved femoral condyle during articulation with the flat tibial plateau.

Menisci are compressed in the day to day activity. The wedge shape of the meniscus and its horn attachments serve to convert the vertical compressive forces to horizontal stresses. Thus they spread the body weight load.

The region of the meniscus with blood supply is able to heal itself better than avascular one.

Two distinct regions of the meniscus can be distinguished: the outer, vascular/neural region (red-red zone), and the inner, completely avascular/aneural region (white-white zone). These two areas are separated by the red-white region.

Functions and Clinical Significance of Menisci 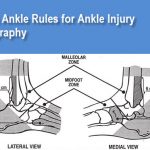 Monteggia fracture-dislocations consist of a fracture of the proximal 1/3 of the ulnar shaft with concomitant dislocation/instability of the radial head. Often the ulnar fracture is obvious but radial head dislocation may be subtle and prone to be overlooked. Therefore high injury of suspicion is required for correct diagnosis and it is important to view […]

First Line Drugs For Tuberculosis There are five drugs in the first-line attack against tuberculosis. The drugs differ in their mechanism of action; whether they are bactericidal i.e. kill bacteria rapidly or bacteriostatic i.e. inhibits the multiplication and growth of bacteria but do not kill them. They also differ in their action against intracellular bacilli […]

Dysplasia spondyloepophysealis congenita is characterized by a short-trunk type of dwarfism with the involvement of the spine and limb epiphyses, particularly the proximal ones. The radiological changes can be identified at birth, though the child may not always be diagnosed clinically at birth. Clinical Features of Dysplasia Spondyloepophysealis Congenita Dwarfism is present both in the […]