Patellar tendinosis refers to anterior knee pain due to tendinosis resulting from repeated loading of the knee extensors. It is also called Jumper’s knee. Patellar tendinosis is found in sportsperson who play sports that involve jumping and heavy landing, rapid acceleration or deceleration and kicking, such as basketball, volleyball, soccer, tennis, long jump, and high jump.

Tendinosis is characterized by progressive tissue degeneration with a failed reparative response and the complete absence of inflammatory cells.

Unfortunately, the precise mechanism by which patellar tendinosis develops is currently unknown.

Patellar tendinosis, if not treated can become chronic.

The knee joint is formed by the femur, the tibia, the fibula. Patella is a sesamoid bone present in the anterior aspect of knee. The quadriceps tendon connects to the patella and patellar the bottom of the patella to the tibia.

Patellar height, malalignment, limb length discrepancy, muscular imbalance or a combination of these, poor base strength of the quadriceps muscles[

Training frequency, the intensity of training, repeated training on a rigid surface, the transition from one training method to another,
improper mechanics during training and genetic abnormalities of the knee joint.

Pain, well-localized anterior dull ache, usually is insidious in onset and may be precipitated by activity. Initially, pain may present as a dull ache at the beginning of or after activity. With continued use, however, pain can progress to be present during activity and can ultimately interfere significantly with performance.

Constant pain at rest and night pain that disturbs sleep may occur with time. Pain also may occur when a person is seated for long periods, and when one climbs up and down the stairs.

On clinical examination, the most consistent finding is patellar tendon tenderness at the inferior pole of the patella which is more severe when the knee is extended and decreases in severity when a knee is flexed to 90 degrees.

Squatting on declined surfaces places the greater load. The number of decline squats before the onset of pain and the level of pain is noted.

In the supine position, with the knee in full extension, the anterior aspect of the knee is palpated to and point of maximal tenderness is noted which is most commonly located at the origin of the tendon at the inferior pole of the patella. After that, the knee is flexed to 90° and pressure is again applied to the tendon. A marked reduction of tenderness to palpation when the knee is flexed or the quadriceps confirms the diagnosis of patellar tendinosis.

While the patient stands, the point of maximal tenderness identified. The patient then stands only on the involved extremity with 30° of knee flexion and the tendon is repalpated. The reduction in tenderness confirms the diagnosis of patellar tendinosis.

Osgood-Schlatter’s disease which is a form of osteochondroses is a differential diagnosis. In cases of adolescents it can be confused with Sinding-Larsen-Johansson disease, also called as pediatric jumper knee.

Patellofemoral pain syndrome,  chondromalacia patellae, fat-pad syndrome should also be ruled out. Meniscal tears and cartilage degeneration may need to may coexist.

Ultrasonography reveals an area of hypoechoic [low echogenicity] signal change and increased thickness corresponding to the area of clinical tenderness.

Colour Doppler examination can identify the vascularity and formation of new vessels in the area of structural change.

MRI shows a signal defect in the proximal patellar tendon and increased thickness in the tendon. MRI provides high spatial resolution and patellar tendinosis is characterized by a focal increase in signal within the tendon as well as an alteration in its size.

Whether ultrasonography or MRI, imaging is not useful in monitoring outcomes following an intervention.

Conservative method is initiated at first and it aims at deloading the tendon and to encourage regeneration. NSAIDs may be used for pain relief if required. Corticosteroid injections may also be used to reduce pain. Local ice application reduces pain in acute situations.

The mainstay of the treatment is activity modification so that patellar tendon is not loaded as much. This involves modification of pain-provoking activities, reduction in training hours, biomechanical correction [like improving strength and flexibility of the muscles and shoe orthoses].

Surgery for patellar tendinosis is only indicated if the patient does not become better even after 6 months of conservative therapy. Surgical options available are arthroscopic debridement, open excision of degenerated areas, repair of defects, multiple longitudinal tenotomies, drilling of the inferior pole of the patella, realignment of the tibial attachment of the patellar tendon.

Rehabilitation includes further strengthening and loading exercises and then gradual return to play. 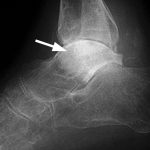 A bone island or enostosis is a common benign bone lesion. It is asymptomatic and does not require treatment. It is usually seen as an incidental … END_OF_DOCUMENT_TOKEN_TO_BE_REPLACED