Phosphorus in body is present in organic and inorganic forms of phosphorus. Apart from ionic form, phosphorus participates in activities in form of phosphate salts. Phosphorus is present as phosphate, and these two terms are commonly used interchangeably. Phosphorus metabolism regulates serum phosphate levels.

Like calcium, the regulation of phosphate balance is by intestinal absorption, renal excretion, and bone accretion.

Dietary phosphorus is present in abundance in most foods, unlike calcium. The body is twice more efficient for absorption of phosphorous than calcium present in the diet. Thus nutritional phosphorus deficiency is rare.

Thus, phosphorus absorption, unlike calcium, is rarely a nutritional problem. In fact, in kidney disease, a diet low in phosphate or phosphorus is recommended.

Phosphorus is central to energy metabolism, intracellular signaling, and cell structure. It is stored mainly in the bones but there are stores in soft tissues also. In fact, phosphorus stores are more in soft tissues than calcium stores.

Phosphorus t makes up 1% of a person’s total body weight. It is the second most abundant mineral in the body.

The main function of phosphorus is in the formation of bones and teeth.

Phosphorus plays an active role in the metabolism of carbohydrates and fats.

It is also used in protein building by the body.

It is also used in muscle contraction and nerve signaling.

Proteins in the diet are the main sources of phosphorus. It is found in abundance in milk and meat. Cheese, beans, soya foods fish, poultry eggs, peanuts, and lentils are other examples. Any diet that provides protein and calcium would be rich in phosphorus also.

Fruits and vegetables contain only small amounts of phosphorus.

The recommended dietary intakes of phosphorus are as follows:

The absorbed phosphorus enters the extracellular fluid pool and moves in and out of bone as needed.

Phosphorus Metabolism and Its Regulation

About 85% of phosphate is present in bone and teeth and about 1%  in extracellular fluid. Rest is found in soft tissues.

Serum phosphate concentration varies with age. Infants have the highest concentration [normal range 4.5–8.3 mg/] as they require a higher amount for growth and build up.

The concentration decreases as the kids grow.  In adults, the normal range is 2.5–4.5 mg/dL.

Phosphate serum levels are regulated by a complex set of processes occurring in the intestine, skeleton, and kidneys. The currently known main regulators of phosphate homeostasis include parathyroid hormone, calcitriol, and a number of peptides collectively known as the “phosphatonins” of which fibroblast growth factor-23 (FGF-23) has been best known.

The primary function of PTH is to tightly regulate serum calcium concentration. It increases proximal tubular expression of 25(OH)D 1?-hydroxylase, resulting in increased production of 1,25(OH)2D3.

Recent studies have indicated that probably FGF-23 acts as a counter-regulatory hormone for 1,25(OH)2D3.

These two regulators are tightly intertwined with FGF-23 physiology.

The phosphatonins [FGF-23, FGF-7, sFRP-4, and MEPE ] are a group of proteins involved in the regulation of phosphate homeostasis. FGF 23 is best defined among them.

They cause a reduction in NaPiIIa protein expression, causing increased renal phosphate excretion.

The main effect of FGF-23 is on phosphate metabolism and the maintenance of phosphate homeostasis.

The mechanism by which dietary phosphate affects FGF-23 levels is as yet unknown.

Inorganic phosphorus is one of the two main ionic components required for hydroxyapatite formation. The enzymatic activity of alkaline phosphatase is required to generate enough of the free mineral.

In cases of hypophosphatemia [low serum phosphate levels], alkaline phosphatase activity rises in order to try to provide more phosphate to the bone cells. Once adequate amounts of phosphate are provided, the enzyme’s activity decreases

The kidney is the major organ involved in the regulation of phosphate homeostasis by a variety of hormonal and non-hormonal factors including serum PTH, calcium, 1,25(OH)2D3 and bicarbonate concentrations.

These changes are almost invariably paralleled by changes in the apical expression of NaPiIIa and NaPiIIc receptors in the proximal tubules.

Kidneys are mainly responsible for decreased or increased levels of phosphates. Intestinal absorption or bone metabolism rarely cause changes in phosphate levels

Reabsorptive hyperphosphatemia occurs in diseases with decreased parathyroid secretion as in hypoparathyroidism. It also occurs in hereditary diseases in which the FGF-23 receptor/Klotho receptor complex is disrupted.

It also occurs in diseases with increased serum FGF-23, including oncogenic osteomalacia and various forms of hereditary osteomalacia.

GFR hyperphosphatemia occurs in chronic kidney disease because of the inability of the kidney to excrete the dietary phosphorus load. IT occurs in the face of increased serum concentrations of both PTH and FGF-23. 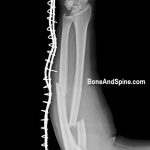 Forearm fractures are very common in young active adults. These fractures generally include at least one or both of the forearm bones namely radius or ulna. Fracture of proximal and distal portions of these bones are special fractures and are discussed separately. This article addresses the injury to the diaphyseal radius and ulna without an […]

Bone metastasis or metastatic bone disease is said to occur when cancer cells from other parts of body spread to the bone. After lung and liver, bone … END_OF_DOCUMENT_TOKEN_TO_BE_REPLACED