Poland Syndrome is a congenital condition characterized by the absence of chest wall muscles on one side of the body and short, webbed fingers of the limb of the same side.

The pectoralis major is a large muscle of the upper chest wall which gives the chest its shape and forms the anterior edge of the axilla. It arises from sternum or breastbone, clavicle and cartilages of the second to the sixth ribs. It inserts on to shoulder and is particularly useful in pushing and rowing activities.

Pectoralis minor is underneath pectoralis major arises from the third to fifth ribs and functions to rotate the shoulder.

The exact incidence of the disease is not known.

However, familial involvement has been reported, suggesting some degree of genetic transmission.

Association with Mobius syndrome and Klippel-Feil syndrome is known. Malignancies like leukemia and non-Hodgkin lymphoma, may occur in patients with Poland syndrome.

The absence of the sternal head of the pectoralis major muscle is considered the minimal expression of this syndrome.

Other muscles which can be involved are the pectoralis minor, serratus, latissimus dorsi, and external oblique muscle.

Other variable associated features are

Exact cause of Poland syndrome is not known.

Majority of cases appear to occur sporadically but rare familial patterns have been observed.

Early interruption of blood flow due to to the subclavian artery supply disruption has been suggested the initiating event. More proximal the occlusion, severer are the symptoms.

Depending upon the location and severity of involvement, the clinical presentation may of Poland Syndrome, Mobius Syndrome, Klippel-Feil Syndrome, and Sprengel deformity.

That is why Poland Syndrome is sometimes referred to as Poland sequence. [A sequence refers to a pattern of malformations derived from a single anomaly.]

These patients are characterized by facial paralysis due to paralysis of the sixth and seventh cranial nerves (Mobius Syndrome) and features typically seen in Poland Syndrome.

It is a rare condition characterized by certain distinctive facial and limb malformations.

The syndrome is characterized by

The right side is more commonly involved. The patient would have obvious chest asymmetry and deformity.

The affected side would have absent nipple and areola with minimum subcutaneous fat. Tasymmetryery may be pronounced by rib cage abnormalities. The affected limb has short arm or forearm or both. There would the be the absence of the sternal head of the pectoralis major muscle.

The patient would have short joined fingers or brachysymphalangism.

Associated muscles which could be underdeveloped or absent are serratus, external oblique, pectoralis minor, latissimus dorsi, infraspinatus, and supraspinatus muscles. There could be a total absence of anterolateral ribs or lung herniation on the affected side.

Though Poland syndrome is present at birth, most of the patients do not seek consultation till late for aesthetic reasons.

The examination is carried out to know the status of following for purpose of treatment.

CT scan is done to determine the extent to which the muscles and bones of the chest wall are affected.

CBC and blood film examination are done when leukemia and non-Hodgkin lymphoma is suspected.

Many patients may not seek he treatment. The treatment of Poland Syndrome would depend on the specific symptoms.

Generally, the patients present for treatment of the chest deformity and breast asymmetry. Some patient may not want surgical treatment and counseling would suffice.

Following are important determinants that influence the timing and options for reconstruction:

Chest deformity can be reconstructed with the latissimus dorsi muscle as early as age 13 years. Rib abnormalities if severe, need to be addressed.

Breast reconstruction provides the best results once the breast has fully developed.

Before that, one may consider early treatment with a temporary expander especially if the patient is psychologically being affected.

[Breast implants and expander should not be placed in patients who are too young.]

Upon completion of breast development (18-19 years of age), the tissue expander can be removed and the breast can be reconstructed with the latissimus muscle transposed over a permanent implant.

If the latissimus is absent, opposite latissimus dorsi or other adjoining muscles may be tried.

Sometimes, therapeutic tattooing is used to compensate for a missing nipple.

Knee dislocation is a relatively rare injury, representing about 0.2% of all orthopedic injuries. Because of association with neural and vascular injury, is important to be recognized. A missed injury could lead to loss of limb. Motor vehicle collision or fall from height are usual causes. A dashboard injury resulting in axial load to the […] 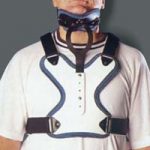 Cervical orthoses could be prefabricated or custom made. Prefabricated cervical orthoses are of two basic types: collars and post appliances. There are a lot of other custom made designs. Apart from serving a reminder to the wearer to restrict head and neck motions,  depending on design and fit, a particular orthosis  may impose forces to position the head, […]