The popliteal artery is the direct continuation of the superficial femoral artery in the popliteal fossa as the vessel courses posteriorly behind the knee. 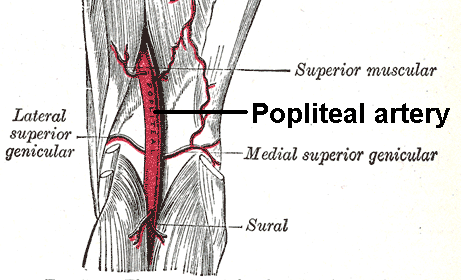 Femoral artery, a continuation of the external iliac artery is the main artery of the lower limb. In thigh, it travels through adductor canal and comes out of the adductor canal through adductor hiatus, an opening in the adductor magnus, at the junction of the middle and lower thirds of the thigh. It is anterior to bone in the femoral canal and as it travels below becomes anteromedial first and then medial at adductor hiatus and then travels posterior to the bone.

In its course, it gives off branches some of which participate in the formation of the periarticular genicular anastomosis, a network of vessels surrounding the knee that provides collateral circulation.

The anterior tibial artery, passes anteriorly between the tibia and fibula, through a gap in the interosseous membrane. It then moves inferiorly down the leg.

The posterior tibial artery [ proximal to the fibular artery origin, it is sometimes called the tibial-peroneal trunk or tibial-fibular trunk] and continues further posteriorly and supplies the posterior compartment of the leg.

In front of the artery from above downward are

The branches of the popliteal artery are

The superior muscular branches, two or three in number, arise from the upper part of the artery and are distributed to the lower parts of the adductor magnus and hamstring muscles, anastomosing with the terminal part of the profunda femoris, a branch of the femoral artery.

Also called inferior muscular arteries, these are two large branches, which arise opposite the knee joint and supply to the gastrocnemius, soleus, and plantaris.

The cutaneous branches arise either from the popliteal artery or from some of its branches; they descend between the two heads of the gastrocnemius, and, piercing the deep fascia, are distributed to the skin of the back of the leg. One branch usually accompanies the small saphenous vein.

Superior genicular arteries, two in number, arise one on either side of the popliteal, and wind around the femur immediately above its condyles to the front of the knee joint.

One of the branches of medial superior genicular artery supplies vastus medialis also.

Middle genicular artery is a small branch, arising opposite the back of the knee joint. It pierces the oblique popliteal ligament and supplies the ligaments and synovial membrane in the interior of the articulation.

The inferior genicular arteries (two in number, arise from the popliteal beneath the Gastrocnemius.

Cervical spondylosis is a term for degenerative changes (wear and tear) of the vertebral discs and facets of the cervical spine. It is considered to be a normal part of aging. It is not symptomatic in many people but may cause recurring neck pain. Cervical Spondylosis often progresses with age and frequently involves multiple levels. […]