Wrist injuries or carpal injuries are often associated with some loss of range of motion. Effective and appropriate and effective physical therapy and rehabilitation can limit the amount of disability a patient sustains.

The ultimate goal of rehabilitation after wrist surgery is achieving a stable and pain-free joint that has sufficient mobility and strength to enable the patient to return to the previous level activity.

In rehabilitation of carpal fracture-dislocations,  the principles that are followed are

The rehabilitation of patients with surgically treated carpal dislocations of fracture-dislocation can be divided into three general phases.

The initial phase of treatment begins immediately after surgery and lasts approximately 8 weeks.

Phase II usually lasts from approximately 8 to 16 weeks after surgery.

Phase III is after 16 weeks.

The timeline given should be regarded as a guideline only and can be accommodated depending on the surgical procedure and patient progress.

Phase I – Acute or initial phase

The initial phase of treatment begins immediately after surgery and lasts approximately 8 weeks.

The patient limb is in a soft, bulky compression dressing and a removable splint. The elbow is at a right angle, wrist in neutral and the thumb palmarly abducted. The interphalangeal joints are free and their motion is encouraged.

Edema or inflammation will occur during this phase.

An inflammation reaction usually accompanies these injuries and can last from 36 hours to 10 days after the injury.

The cast is applied after 10-14 days after suture removal.

A long arm-thumb spica cast is used to stabilize the scaphoid with the distal end of the cast not beyond the distal palmar crease. [A cast that extends beyond that point usually blocks metacarpal motion, preventing full flexion at the metacarpophalangeal joint or keeping it in a nonphysiologic extends position.]

Active range of motion for both the shoulder and elbow and the fingers are begun while the patient is in the cast. The long arm cast is for  4 weeks, after which a short arm cast is applied for an additional 4 weeks. Some authors advocate short limb cast only.

Postoperative edema control is vital to minimize interstructural adhesions, joint stiffness, and pain. Edema can become a chronic problem if it is not addressed appropriately. Elevation, ice, range-of-motion exercise, light compression, and high-voltage pulsed stimulation are the usual techniques for control of edema.

This should begin immediately after surgery. The hand should be placed above the elbow, and the elbow should be higher than the level of the heart. Active motion of fingers is encouraged.

The application of a cold pack in the first 24 to 48 hours after onset of edema is often the treatment of choice. It is helpful in reducing not only edema but also a pain in some patients. Care must be exercised when applying cold to the affected extremity.

It is also called galvanic stimulation and is a type of interrupted monophasic wave-form stimulation. The physiologic theory behind this  therapy is that with the acute edema, proteins leak into interstitial spaces; the electric current of  forces the proteins to move into the lymphatic system, away from the interstitial spaces

Thus, range-of-motion exercise for the elbow, shoulder, and hand in their available planes of motion should be started as soon as the patient can tolerate them.

Passive exercises may stress patients beyond their pain limits, resulting in more edema and should be avoided.

The exercises are performed frequently throughout the day rather than in one long session.

Phase two usually lasts from approximately 8 to 16 weeks after surgery.

It begins when the cast is being discontinued or is being used only intermittently. Any Kirschner wire used in surgery is usually removed 8 weeks postoperatively.

This rehabilitation phase should be initiated only when adequate wrist stability has been achieved.

The patient might, during this phase, has wrist and forearm stiffness, scar tissue or adhesions, mechanical dysfunction, and muscle weakness and these need to be tackled.

Treatment of edema may be continued if still present.

Prevention of wrist and forearm stiffness, stretching and passive range-of-motion exercise is indicated during stage two but care should be taken not to disrupt the repair or to over-mobilize either the involved or uninvolved joints. Active range of motion, nonresistive functional tasks, and thermal modalities are used to treat stiffness.

Heat can be given by superficial heating agents, such as the moist hot pack [ These produce maximum heat at a depth of 0.5 cm in 6 to 8 minutes].

Heat increases the blood flow to the skin and increased exercises level in muscles. Thus applying heat prior to exercise for 15 to 20 minutes, followed by active exercise is beneficial.

Ultrasound is a high-frequency acoustic energy that elevates tissue temperatures at a depth of 3 to 5 cm without creating excessive heat in the superficial structures.

It facilitates an easier range of motion especially when active range-of-motion exercises were done after ultrasound treatment.

Active range-of-motion exercise initiated in phase should be continued in this phase as needed to address limitations in digital range of motion.

Medical exercise training is a series of exercise that involve several repetitions of a short arc of pain-free, active motion.

They increase the nutrient supply and eliminate by-product waste caused by the inflammatory process through improved blood flow. These are performed for 2 to 5 minutes in each wrist plane of motion, including flexion-extension, ulnar-radial deviation, and pronation-supination.

These exercises may be performed as often as every hour.

Functional or purposeful activity tasks should always be incorporated into therapeutic intervention. They can include any bilateral activity that involves multiple joint and motor patterns and is appropriate and important to the patient’s activities of daily living. For example, in an auto mechanic disassembling and assembling a small carburetor, is quite rewarding.

If edema persists into the second phase of rehabilitation, the cause of the edema should be reassessed. Additional reduction techniques should be reassessed might be tried, such as HVPS on a lower frequency setting or manual edema mobilization. Any pressure dressing must be discontinued and the approach reassessed.

Both clinical and experimental trials have demonstrated that biomechanical changes within tissue that occur with scarring have a negative effect on function. Scar management involves various techniques such as active range of motion, applied controlled stress, scar pads, and soft-tissue mobilization. Such techniques do not actually break up scar tissue but increase the pliability and facilitate elongation of the tissues.

Ultrasound not only has a definite role in providing a deep thermal heat but is also used to restore mobility when scarring present. Because scar tissue is denser than surrounding tissues, ultrasound selectively heats the scar tissue prior to scar massage and range-of-motion exercises, thereby facilitating scar elongation.

Deep transverse friction massage that crosses the grain of the connective tissue is applied to mobilize the superficial scar by stretching its underlying tissue adhesions. Heat and ultrasound applied prior to the massage increase the elasticity of the tissues, thereby increasing the effectiveness of the massage.

A bulky, superficial scar can be treated with a scar mold or pad made of elastomer, prosthetic continuous pressure, resulting in a flatter, softer scar that is more elastic and cosmetically appealing.

Dysfunction can occur with an imbalance in proper wrist biomechanics in the bone, ligament, or musculotendinous unit. Such dysfunction can be addressed therapeutically without placing increased stress on the carpus.

This includes any form of exercise that isolate the active wrist flexors and extensors. The patient should focus on contracting the wrist muscles without involving accessory muscles or using compensatory techniques.

The purpose of the program is to create a stabilizing force across the carpus by co-contraction of the wrist flexors and extensors and long finger flexors without creating an excessive force to the carpus.

The patient pulls, using approximately 30% of his or her maximum volitional contraction. This isometric position is held for 90 seconds and alternated with 30-second rest periods. Further scientific studies are needed to establish the efficacy.

Several forms of dynamic wrist strengthening are performed during stage three. The focus is on eccentric lengthening.

If pain or hypermobility is an issue, these exercises should be performed in the midrange of motion. Again, incorporating functional tasks, such as using a screwdriver or plier’s is encouraged.

Muscle re-education sometimes these exercises need to be continued. The hanging program may be continued, with resistance increased to 80% of the perceived maximal effort. In cases of extreme weakness and adhesions, electrical stimulation may be helpful.

Advanced Training Exercise dynamic stabilization, plyometrics, and weight bearing should be incorporated once the patient has demonstrated an increase in static and dynamic muscle work without pain.

Weight bearing should be performed only when the patient is completely pain-free. This may progress from wall push-ups to floor push-ups and push-ups using a therapeutic ball. It is especially important to incorporate these exercises into the rehabilitation of active individuals, but they must be approved by the physician.

Sciatica is the term used to describe mild to intense radiating pain in the lower limb. The term sciatica does not denote any disease. It is, in fact, a vague expression for a set of symptoms. An equivalent medical term is a radiculopathy. It is used to describe pain, numbness, tingling, and weakness in the […] 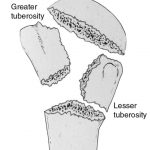 Proximal humerus fractures account for approximately 5% of all fractures. Proximal humeral fractures generally occur in older patients. This is so because older patients have osteopenic or osteoporotic bones which get damaged easily by trivial trauma. High energy trauma can produce these fractures in any person of any age. Relevant Anatomy of Proximal Humerus Humerus […]

Dynamic condylar screw is an implant assembly that consists of a lag screw, angled barrel plate fixed to the bone [usually distal femur] by 4.5 cortical screws. DCS and DHS work on the same principle of the sliding nail that allows impaction of the fracture. This is due to the insertion of wide diameter into […]