Removal of plaster cast is a procedure that is done by qualified and experienced medical personnel. The procedure involves risk of injury to the patient and should be done with utmost care.

Following equipment are necessary for removing a cast

The choice of apparatus for removal of plaster cast depends on several factors. Unpadded and skin-tight casts are cut with plaster shears. Completely padded casts can be cut with an electric plaster cutter.

The noise of the electric cutter frightens some children, and so shears may be used.

The procedure is explained to the patient, and the apparatus that you will be using should be demonstrated to make them feel at ease.

The cast should be cut steadily and smoothly. It is good to converse with the patient during the procedure of removal of the plaster cast so that his attention is diverted.

The limb in plaster should be supported by sandbags. For lower limb casts, the patient lies on the side and for upper limb casts patient can sit or lie down. The patient is covered with linen and positions the patient’s limb appropriately. The position of the limb may be changed during the procedure as required.

Assure the patient that the procedure is safe, the electric saw does not cut the skin as it vibrates. But do warn the patient about saw blade getting hot as it sometimes may cause discomfort.

A plastic skin protector strip may be inserted between the cast lining and a patient’s limb in the area where cutting will occur. This would protect the skin further from blade injury. 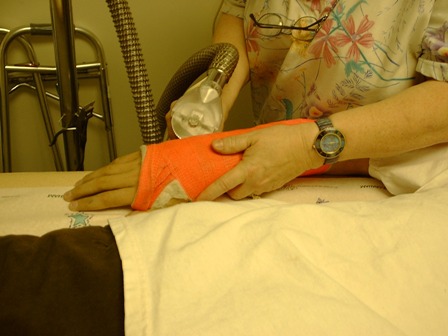 The size of shears used depends on the size of the cast. Draw guidelines down the side of the cast making sure that the line does not run directly over any bony prominences.

The stockinette is snipped at the ends of the cast to allow the shears to be positioned above this lining materials. If stockinette has not been used, try to insert the blade between the plaster and the padding wool.

Insert the blade under the plaster, parallel to the skin with the handle held steadily in the vertical position. The other blade cuts through the cast from above, its handle should be parallel to the cutting line at rest. This is the starting position, and if the blades are incorrectly aligned, the lower blade will press into the flesh causing bruises or even lacerations.

After each cut, the blades should be realigned before the next cut is made. This prevents the skin wrinkling in front of the shears. These manoeuvers are important because the thick tips of the blades can press uncomfortably on the surface of the skin.

Remove the shears after every four or six cuts. Clear any clogging in the blades and use the plaster benders to open out the cast.

Never try to cut around corners. Always remove the blades and cut from the opposite end of the line to meet the end of the cut already made.

When using shears, keep the elbows relatively still and apply the cutting force from the shoulder girdle and chest muscles. This gives a more controlled power and saves energy.

The electric cutter must only be used to cut completely padded casts.

When using an electric cutter make sure that:

Position the patient correctly, and mark the line of cutting. Reassure the patient by showing them that the cutting blade works by oscillation, and only cuts hard materials.

The blade becomes hot when used and cutting must be stopped if the patient feels any heat. the blade should be allowed to cool if very hot. A change of blade

Position the blade at the start of the guideline, apply gentle pressure and move the cutter smoothly along the line. When cutting starts, there is a tendency to grip the cutter which exerts unwanted pressure on the cast.

The electric cutter should always be used carefully especially near bony prominences such as the medial border of the foot leading to the big toe.

Note: The cast may have to be bivalved for inspection, X-ray purposes and sometimes for skin preparation prior to operation. In these circumstances, the halves are replaced and held by a bandage until further direction is given.

Care of the Part After Cast Removal

After removal of cast, examine and inspect the limb for any signs of trauma inflicted during the removal procedure.

Instruct the patient for the following care

The most common problem occurring with cast removal is an injury to the skin. Plaster can be removed by using an electric cast cutter or a manual shear. Another method is to soak the plaster wet and unwrap the bandage.

The last method is used in children as they get afraid of the noise produced by cutter.

Swelling of Limb after Cast Removal

Limb swelling after cast removal is a common problem. It has been named as fracture disease by some.

After removal of the plaster cast, the most com­mon problem is swelling of the limb. This has been called fracture disease by some.

The patient should be encouraged to conduct active exercises of fingers or toes and limb elevation.

After removal of the cast, an elastic bandage can be wrapped around the extremity, but the patient should be instructed to continue active exercises and elevation.

A certain amount of muscle weakness fol­lows the removal of plaster and doing active exercises to strengthen muscles may be required for a long time to regain strength.

In the following video, a synthetic cast is being removed with an electric cutter.

The following video demonstrates the removal of the plaster cast of the arm using an electric cutter. 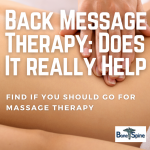 Have you ever considered a back massage for back pain? Do you wonder if it is really effective or would help you? Let us find out. Back pain and neck pain are often quite irritating and take time to go. Most of the back pains we have are due to postural abuse of the spine […]

Trochlear dysplasia refers to a pathologic alteration in the shape of the femoral trochlea. Trochlea is also called facies patellaris, intercondylar groove, or intercondylar sulcus. Normal trochlea is sufficiently concave to guide and retain the patella throughout the normal range of movement. However trochlear dysplasia may cause the groove to be shallower than normal or […]