However, the use of the term includes diseases of vertebral joints and vertebra both.

Ideally, the term should refer to any type of joint disease, including rheumatoid arthritis and osteoarthritis.

But the use of the term has become limited to a group of disorders with certain common features and termed specifically as seronegative spondyloarthropathies.

What are Seronegative Spondyloarthropathies and Why These are Called So?

Spondyloarthropathies are a group of disorders is characterized by

There is a strong correlation with HLA-B27 .

They have an increased incidence of HLA-B27, as well as negative rheumatoid factor and ANA.

These are called Seronegative spondyloarthropathies because they are negative for rheumatoid factor.

The diseases included in this group are

Presence of Inflammatory back pain, or synovitis (asymmetric, predominantly in the lower limbs)  along with one or more of the following:

Apart from ESSG, Amor criteria is also used for diagnosis of spondyloarthropathies.

On plain radiographs, sacroilitis grading according to the New York criteria.

Ankylosing spondylitis is the most common of seronegative and primarily affects axial skeleton, usually begins in adolescence and early adulthood. The disease also affects peripheral joints as well, hip and shoulder being most common.

The prevalence of ankylosing spondylitis is 0.1-0.2% and may be higher in certain populations.

The male-to-female ratio of ankylosing spondylitis is 3:1.

The disease begins in the sacroiliac joints. Most patients have mild chronic disease or intermittent flares with periods of remission. Progression occurs from the lumbosacral region to involve other regions of the spine.

Peripheral involvement is seen in 30-50% of the patients.

Uveitis is the most common extra-articular manifestation [20-30% ]. Cardiovascular involvement <10% of patients, typically those with severe long-standing disease.

The course of the disease is characterized by remissions and exacerbations and Clinical presentation of ankylosing spondylitis varies from individual to individual.

Morning stiffness is characteristic. Peripheral Pains are due to enthesitis.

Pain is reported mainly in the hips, shoulders, and joints of the chest wall, including the acromioclavicular and sternoclavicular joints. Other peripheral joints are involved less frequently and to a milder degree.

Earlier known as Reiter syndrome, reactive arthritis is an autoimmune disease that develops in response to genitourinary or gastrointestinal infection or a preceding Chlamydia respiratory infection.

Mechanism of development of reactive arthritis is not known but antigens are known to cross-react with self-proteins.

Reactive arthritis is most common in young men, with the peak onset in the third decade of life. It is rarely seen in children.

Reactive arthritis after gastroenteric infections is equal in both males and females. The disease associated with genitourinary infection is found more in males.

It is a form of chronic, inflammatory arthritis associated with inflammatory bowel disease like ulcerative colitis and Crohn’s disease.

Peripheral limbs are more commonly involved than the spine.

The disease is characterized by abdominal pain [often bloody diarrhea] and joint pains.

The most common type of psoriatic arthritis involves few joints.

The peripheral joint disease occurs in 95% of patients with psoriatic arthritis, and the spine is involved in 5%.

Psoriatic arthritis is more frequent in patients with severe psoriasis. However, the severity does not relate to the pattern of joint involvement.

The disease appears to involve an autoimmune response triggered by exposure to an infectious agent.

It can lead to multiple signs and symptoms which at first appear unrelated.

Examples are mouth ulcers, inflammation of the eye, skin rashes and joint pains.

The systemic manifestations can be variable and symptoms vary from person to person. It may disappear and recur on its own.

Painful mouth sores aphthous ulcers is the most common presentation.

The sores usually heal in one to three weeks and may recur.

Sores on genital glands, scrotum, and vulva show genital involvement. The skin may have acne like ulcers or raised and tender nodules.

Uveitis in the eye can lead to a painful red eye.

The knee is the most common joint involved, often bilateral followed by the ankles, elbows or wrists.

Vasculitis causes pain at the site of involvement causing painful swellings in the region, aneurysms, and occlusion of the vessel.

The condition is characterized by joint pain, swelling, and stiffness. Systemic signs like fever and rash could be present.

Management is by nonsteroidal anti-inflammatory drugs and physical therapy mainly. Sulfasalazine has been suggested to have some role in the management of undifferentiated spondyloarthropathies.

Patients usually present between 20 to 40 years of age.

Back pain, either lumbar or dorsal, buttock pain in single or both or alternating are chief presenting complaints. Pain is worse in the night and may be associated with stiffness in the morning.

Enthesitis [pain and tenderness at tendon insertion] and dactylitis [ inflammation involving a whole finger or toe] with tendovaginitis and arthritis (sausage digit) may be present.

Associated complaints depending upon the disease profile may be nongonococcal urethritis or cervicitis, or acute diarrhea one month or less before the onset of arthritis, psoriasis, balanitis or inflammatory bowel disease, anterior uveitis may be present. There might be a family history of spondyloarthropathy.

ESR and CRP are often raised in relation to disease activity. Rheumatoid factor as noted is negative.

Serum uric acid, antinuclear antibodies, bacterial serology should be done to rule other causes or know any association.

Xray of the sacroiliac joints should be done for checking sacroiliitis. Xray of the affected painful part should be done. MRI may be needed in certain cases to rule out disc herniation. HLA testing is not normally done due to high false positive rates.

Seronegative spondyloarthropathies depend on the type of spondyloarthropathy. NSAIDs, Disease-modifying antirheumatic drugs [DMARDs – sulfasalazine, methotrexate], TNF – blockers like etanercept, infliximab and adalimumab are the drugs used for management. Physiotherapy and occupational therapy are also used along with.

Surgery may be indicated  in severely destroyed joints

Spondyloarthropathies are associated with spontaneous remissions or exacerbations. The disease continues for many decades. Poor prognostic factors are

First described as a syndrome by Apert in 1906 Apert syndrome primarily affects the head, hands, and feet and is characterized by fusion or synostosis [fusion] of the cranial sutures and varying degrees of complex syndactyly of the hands and feet. It is also called acrocephalosyndactyly, type 1 or ACS1. Apert syndrome is very rare, […] 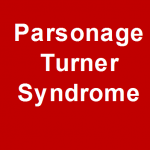 Pronator syndrome is a compressive neuropathy of the median nerve at the level of the elbow. The median nerve, one of the three major nerves of the upper limb mainly supplies the hand and is also known as the eye of the hand. Pronator syndrome or pronator teres syndrome results in a predominantly sensory alteration […]