The humerus shaft fracture is the fracture of humerus bone that lies between the proximal and distal part of the humerus. This part lies between the upper border of the pectoralis major insertion proximally and the supracondylar ridge distally. This constitutes the middle three-fifths of the entire humerus. 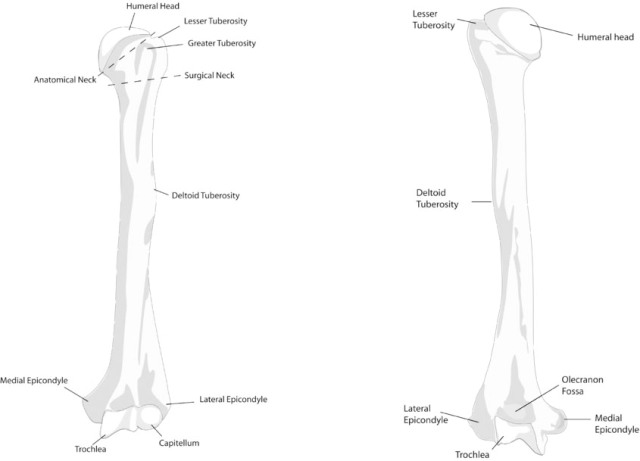 Biomechanics of Shaft of Humerus Fracture

This occurs when the patient falls against or is thrown against a fixed object or when a blunt object strikes the arm. This mechanism produces a transverse type fracture line, occasionally with a nondisplaced butterfly fragment.

The energy absorbed by the humerus is through the distal portion of the limb. It occurs in situations like the twisting of the arm behind the back or during arm wrestling. These injuries create a spiral fracture.

Strong muscle contractions like throwing can lead to spiral fractures. The shaft of humerus fracture can occur in motor vehicle accidents, fall from heights or direct trauma.

The patient presents with extreme pain at the site and skeletal instability. The patient often supports his injured limb with other one to ease out the pain. On examination tenderness and swelling is noted.

The skin should be examined all around to not any wound. If present, its communication should be noted with the fracture hematoma.

Neurovascular injuries are not very common with fracture humerus but must be looked for in every case. The vascular status of the extremity should be evaluated by palpation of distal pulses and assessment of capillary refill.

Radial nerve is quite vulnerable to injury in humeral fractures and must be evaluated especially along with an examination of other nerves. Motor testing of wrist dorsiflexion and of extension of the interphalangeal joint of the thumb along with sensory evaluation over the dorsum of the hand indicates whether the radial nerve is functioning normally.

Anteroposterior and lateral views of the diaphysis, as well as views of the elbow and shoulder joints, should be done.

If there appears a compromise arterial Doppler examination should be done to rule out or confirm the injury.

Traction views may be necessary for fractures with significant shortening, proximal or distal extension but not routinely indicated

Majority of fractures of the shaft of humerus can be managed non-operatively. Operative intervention might be needed in fractures that are open or irreducible, those develop radial nerve palsy after plaster application, fractures with soft tissue incompetence and those which occur with other injuries requiring fixation.

Non-Operative Treatment of Fractures of Humerus

Modern closed treatment methods rely substantially on the effect of gravity to achieve proper position of the fracture.

With the elbow bent at 90 degrees, a long arm cast is placed and upper part of the cast is molded carefully to align the humeral fracture. A  series of loops are incorporated into the cast at the junction of the middle and distal thirds of the forearm.

After application, the cast is then suspended by a strap around the neck connected to the loops on the cast.

By changing the position at which the strap connects to the loops, the alignment of the fracture can be adjusted.

The arm must remain dependent at all times all the times. The patient should be sleeping in Fowler’s semi-reclining position, and while sitting, the patient should avoid support under the elbow. Distraction and poor healing is a complication with this technique.

This method can be used for temporary or definitive treatment. It involves placement of a well-molded plaster slab from the axilla, around the elbow, and over the deltoid with the elbow flexed to 90 degrees. A collar-and-cuff suspension sling supports the forearm. This method has less tendency for distraction as compared to hanging cast.

Humeral fracture orthosis is the preferred method of non-operative treatment of fracture humerus. A rigid, light-weight plastic brace composed of an anterior and posterior shell joined by Velcro straps. A flare extending over the deltoid with an additional strap meant to extend around the thorax may prevent the brace from slipping distally. When fitted properly, the splint extends from the axilla medially to a position as far distal as possible without limiting motion of the elbow joint.

Straps help to adjust the brace and prevent from slipping.

In the early period of treatment, a collar-and-cuff type of suspension strap connected to the wrist.

The position of the fracture fragments must be verified at 1 week and again at 2 weeks after fracture. Radiographs should be checked every 3 to 4 weeks during healing until the fracture is clinically and radiographically united. Bracing should be continued for at least 8 weeks to prevent refracture.

Nonoperative treatment of fracture of humerus produces very good results but not a feasible choice in many situations.

In the following situations, an operative intervention needs to be considered.

This method involves fixing the fracture using a plate and screws. It is quite an effective method of fracture fixation but involves quite a significant amount of dissection and soft tissue stripping from the bone. and at times may cause blood loss.

The posterior approach to humerus is used for distal to middle third shaft fractures.

The choice of approach would also depend on the presence of elbow motion. If elbow motion is present, plate needs to be applied on anterolateral surface as that is the tensile surface.

When elbow is fixed and stiff the biomechanics become such that posterior aspect is tensile surface and plate should be applied on that surface.

The most common complications reported with plating procedures are infection and iatrogenic radial nerve palsy. The range of motion of the elbow and shoulder of the involved extremity returns predictably after plate fixation.

Intramedullary fixation involves passing a nail across the fracture sites. The intramedullary device could be multiple, flexible devices or a single, more rigid nail, usually with interlocking capability.

Limited role in closed fractures. External fixation involves a system of pins and rods. The pins are passed inside the bone on either side of the fractures and held with connecting rods.

External fixation is used for open humerus fractures and in case of damage control orthopedics where definitive treatment is not possible.

An open fracture is one that has an associated wound over it and that wound communicates with fracture hematoma. Open fractures are always a special situation because they demand a prompt and aggressive approach.

The hallmark of open fracture is an associated bleeding wound. In severe cases, the fracture fragments may be jutting out. Because often the skin has been breached, there are higher chances of neurovascular injuries. Therefore all the nerves and vessels should be carefully examined.

If there is an arterial injury, a doppler ultrasound would be required to confirm and know the level of injury.

External fixation usually is done for fractures with such severe injury to the soft tissues and profound contamination.

These usually result in severe damage to the soft tissue and formal debridement in the operating room followed by fixation, often with an external fixator, is necessary.

10-20% of radial nerve palsies occur during the course of treatment.

Patients of humerus fracture would have a wrist drop in addition to humerus fracture. The patient would be unable to dorsiflex his wrist and extend the metacarpophalangeal joint.

A complete neurological examination must be carried out to rule out any other injury and to determine the level of injury.

The patient has loss of grip strength and wrist and finger extension power. A wrist dorsiflexion splint dramatically improves grip strength and function and should be used on all patients. A functional splint with outrigger attachments to provide a passive extension of the digits through rubber bands is useful.

These should be given to every patient of radial nerve palsy.

Most of the patients just need to be observed while they recover uneventfully.

The time course for clinical recovery of nerve function can be estimated by measuring the distance on radiographs from the fracture to the point of innervation of the brachioradialis muscle, approximately 2 cm proximal to the lateral epicondyle. Assuming nerve recovery at 1 mm/day and adding an additional 30 days, as has been recommended, brachioradialis function after a midshaft fracture 12 cm proximal to the lateral epicondyle requires at least 100 to 130 days for recovery

Failure of the appearance of clinical signs of recovery after a reasonable period of time has passed, open fractures with radial nerve palsy or palsies that worsen with treatment require exploration by surgery.

The patients where the nerve do not show any recovery are benefited by tendon transfer surgery.

Fracture of shaft of the humerus is very amenable to treatment but a percentage of fractures do not heal. Normal healing of a humeral fracture occurs over 8 to 10 weeks. If the fracture has not achieved union by 3 to 4 months, it can be considered a delayed union. If the union does not occur by 6 to 8 months it is called the nonunion of the fracture.

Hypertrophic occurs due to increased vascularity which allows the abundant callus to form. The callus formed has insufficient stability to prevents the union.

In atrophic nonunions, the fracture has an inadequate blood supply and prevents callus.

Operative treatment methods have a higher rate of non-union as compared to the nonoperative methods. Apart from this, there are various factors that increase the chance of whether a patient would develop non-union. These factors are

Treatment of the nonunion aims at removal of the cause if known, fixation of the fracture with surgery and bone grafting to augment the healing process.

The bone can be fixed by plating or intramedullary nailing. The graft is usually taken from the iliac crest.

In the case of nonunion and osteoporosis, it might be difficult to meet the fixation. In such cases, an additional procedure like filling the capability with cement or augmentation with fibula may be needed.

Varus angulation is common but rarely has a functional deficit. 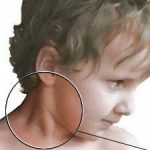 Congenital muscular torticollis is an asymmetrical deformity of the head and neck in which the head is tilted toward the side with the shortened muscle and the chin rotated towards the opposite side. The deformity is noticed after the birth of the child and it could manifest in a few days to weeks. The deformity […]

Skin traction is a type of traction that transmits the force via skin. A traction is a directional pull on the trunk or on an extremity. Its … END_OF_DOCUMENT_TOKEN_TO_BE_REPLACED