Sprengel deformity is a congenital condition where the scapula is small and located higher than its normal position because of its failure to descend to its position. There could also be scapular winging and presence of omovertebral bone 30-50%]. Omovertebral bone is an anomalous bone connecting the elevated scapula to the cervical spine. It is also called omovertebral bar and connects the superior medial angle of the scapula and cervical spine.

Sprengel deformity is the most common congenital malformation of the shoulder.

It is named so after Sprengel who described it.

Females are affected about 3 times more commonly than males.

The condition is sporadic but may be found in families in autosomal dominant inheritance.

The scapula bone or shoulder blade as it is commonly called is located too high in Sprengel deformity. Because of presence of omovertebral bar, there is a restriction of shoulder movements as well.

The affected shoulder blade is hypoplastic too [underdeveloped] and rotated toward the middle of the body.

The condition is typically present at birth (congenital), but may not become apparent till late.

The exact, underlying cause of Sprengel deformity is unknown. Rarely, some familial cases have been noted though mostly it is sporadic occurrence.

The condition is thought to occur due to a failure of the descent of scapula.

In the fetus, the scapula forms opposite the C4,5,6 at about 5 weeks and then descends to the thorax by the end of 12 weeks. Any obstacle to its descent may cause the scapula to stay small and high [Sprengel deformity].

The affected scapula is not only high but also a hypoplastic and distorted in shape.

There is the rotation of the inferior angle medially resulting in an inferior facing glenoid.

The omovertebral bar [can be fibrous, cartilaginous, or bony] is seen in about 30% cases and spans the superomedial angle of the scapula to the cervical vertebrae [spinous process, lamina, or transverse process].

The muscles of the shoulder are affected too.  Trapezius muscle may be absent or weak, especially in its lower part. There could be hypoplasia of rhomboids and levator scapulae.

Sprengel deformity may be associated with following syndromes too

The deformity is present at birth but may be noted later. Often, it is discovered in children during the evaluation of scoliosis.

The asymmetry of the shoulder caused is a typical finding.

On examination, the level of the scapula in relation to the vertebral column varies with the severity of the condition.

On the affected side, the neck is fuller and shorter. The affected scapula is often tilted obliquely upward and laterally.

Passive movements of the glenohumeral joint [joint between humerus and glenoid] are usually within normal range but scapulocostal motion [between scapula and thorax] is restricted.

Kyphosis and Torticollis may be present. Deformities of the rib cage, such as the absence of ribs, may be clinically palpable.

When the condition is bilateral, the neck appears very short and thick. The cervical lordosis may be increased through abduction on both sides would be comparable.

Following views are the best

MRI is often not required though can help in the analysis of omovertebral bar.

When cosmetic and functional concerns are not much, surgical correction is not required. The treatment consists of physical therapy for providing strength and range of motion.

The surgery is best done between age 3 to 8 years of age as the risk of nerve injury increases after that.

To aid for better mobility clavicle osteotomy and resection of the omovertebral bar can be done.

The main objectives of surgery are to 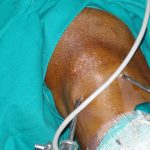