Tuberculosis of joints is a localized and destructive disease. It is generally spread through the bloodstream from a primary focus.

Hip is the most common joint involved in tubercular arthritis and is followed by knee, ankle, elbow, and shoulder.


The infection in the joint can either be through blood or spread from the adjacent bone.

From the bone, tuberculosis spreads with increasing destruction of the surrounding bone and finally breaking into the joint. The synovial membrane reacts first by excessive secretion of fluid and later by proliferation. With time synovial membrane gets thickened, its inner surface gets studded with tubercles, and fibrosis of its outer surface.

A pannus forms over the articular cartilage that eventually destroys the underlying articular cartilage and subchondral bone. The destruction of articular surfaces is most extensive around the periphery in areas where tuberculous granulations involve the synovial membrane.

With the progression of the disease, increasing amounts of caseous necrotic material and tuberculous exudates are produced.

If the original focus remains active and these abscesses remain untreated, they will rupture externally through the skin to form sinuses.


Tubercular arthritis is monoarticular in 90 percent of cases.

Typically, the patient appears ill,  fatigued and has weight loss. A family history of tuberculosis may be obtained.

The patient may present with pain in the involved joint, swelling and stiffness of the joint. Limp may occur in case the joint of the lower limb is involved.

After spine, the order of frequency of involvement in decreasing order is the hip, knee, ankle, sacroiliac, shoulder, and wrist joints.

In superficial joints, such as the knee or elbow, synovial thickening, and effusion present as a fullness or bogginess.

The earliest findings in the radiograms are regional bone atrophy, soft-tissue swelling, and capsular distention. These changes are due to synovitis and are nonspecific. As a rule, the bone decalcification in tuberculous arthritis is widespread, extending 3 to 5 cm from the joint.

The joint space is widened and is preserved until late in the course of the disease.

Destruction of the hyaline cartilage by the tuberculous granulation tissue is a slow process in contrast to pyogenic arthritis, in which the destruction of articular cartilage and narrowing of the joint space take place early in the course of the disease.

The reactive new bone formation is characteristically absent in the early stages of tuberculous arthritis. It is only in the late healing stages that it develops.

Sequestra may occasionally be present.

Eventually, in an untreated case, the entire articular cartilage will eventually be eroded and extensive destruction of subjacent bone will take place, resulting in the gross deformity of the joint.


The general findings are those of a chronic illness. Hypochromic anemia is common. The leukocyte count may be normal, or there may be slight leukocytosis. An elevated erythrocyte sedimentation rate and positive tubercular skin test are almost always present.

Tubercle bacilli may be seen on the microscopic examination of the sediment of the joint fluid. A finding of great help in the differential diagnosis is the marked reduction or absence of glucose in the synovial fluid. Cultural studies and guinea pig inoculations will be positive for tuberculosis.

The diagnosis is also confirmed by histological examination of synovial tissue. Most of the diagnosis in endemic regions is made on clinicoradiological changes


Antitubercular drugs have radically improved the prognosis of tubercular arthritis. Other measures adopted are- rest to the affected joint in a functional position, traction when needed and dietary improvement. 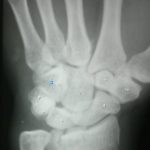 First Line Drugs For Tuberculosis There are five drugs in the first-line attack against tuberculosis. The drugs differ in their mechanism of action; … END_OF_DOCUMENT_TOKEN_TO_BE_REPLACED