Ulnar variance [also called Hulten variance] refers to the difference between the levels of distal radial and ulnar articular surfaces. As we know wrist is formed by the articulation of the distal radius, distal ulna, and carpal bones.

Many anatomical variations and conditions may lead to a change in the normal relative arrangement of radius and ulna.

Ulnar variance, therefore, is the measurement of the length of the ulna compared to the radius.

The variance could be neutral, positive and negative.

It is said to be neutral if articular surfaces of radius and ulna are at the same level i.e. the difference between ulnar and radial length is <1mm.

It is positive if the ulnar articular surface is distal to radial.

Positive variance can lead to wrist pain because of increased impaction and stress on the lunate and triquetrum.

It is negative if the ulnar articular surface is proximal to radial.

The variance is lower in males than in females. It is less in younger age and tends to increase as we grow older.

The variance is affected by relative positions of radius and ulna. Therefore, it is different in different anatomical positions

It becomes more positive in pronation and gripping whereas negative ulnar variance is seen in supination.

There are a lot of studies that have measured the true values of ulnar variance and its normal variations. The most cited value of is 0.9 mm (range: -4.2 to +2.3 mm).

The different variance values also signify the distribution of load borne by individual bones i.e. radius and ulna on the wrist.

There could be many causes of the positive value of the variance. Common causes are given as follows

How is Ulnar Variance Measured?

It is measured on posteroanterior radiographs with the wrist in neutral rotation.

For x-ray measurement, the following position is recommended

A transverse line is drawn perpendicular to the axis of the radius bone, at the level of the lunate fossa (touching the ulnar half of the articular surface of the radius).

A second transverse line is drawn at the level of the ulnar head.

The lunate fossa is the articular depression on the distal radius articular surface that articulates with lunate carpal bone.

The distance between the two lines indicates ulnar variance.

Therefore, to determine ulnar variance on radiographs the wrist should be in neutral forearm rotation, the elbow flexed 90° and the shoulder abducted 90°.

It is worthy of mention that the length of ulnar styloid does not affect the value of the variance. 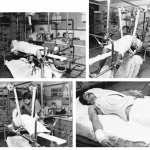 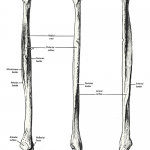