Undifferentiated Spondyloarthropathy is a term used to describe the condition where presentation does not meet the criteria for a definitive diagnosis of ankylosing spondylitis or related disease.

Differentiating features are given below

It was earlier believed that this condition represents an initial stage in the development of specific spondyloarthropathies but when these patients are observed over long periods, they rarely develop clinical manifestations or radiographic changes that result in a change of diagnosis.

There are various kinds of presentations. About 90%  of the patients have inflammatory back pain

Inflammatory back pain has the following features

More on inflammatory back pain

Enthesitis is present in  85%. Pain at the site of enthesitis like the back of the heel [Achilles tendon insertion], heel [ plantar fasciitis] occurs in 30-50% of the cases.

In about 35%, pain is reported mainly in the hips, shoulders, and joints of the chest wall, including the acromioclavicular and sternoclavicular joints. Other peripheral joints are involved less frequently and to a milder degree.

About 15% of patients report dactylitis which means inflammation of a digit.

More than half of the patients also complain of fatigue.  [

Although no specific criteria are identified, using modified Amor criteria can be helpful.

Lab studies are usually normal except for inflammatory markers like ESR and CRP in about 30 percent of the cases.

Unlike ankylosing spondylitis, the radiological changes are not pronounced in undifferentiated spondyloarthropathies.  Occasionally, X-ray may show evidence of periosteal new bone formation at sites of enthesitis. Enthesitis. Insertion of the Achilles tendon or plantar fascia on the calcaneus is particularly are more involved. X-rays may also show early syndesmophytes on the lumbar spine without bridging.

Most of the patients [>75%] with undifferentiated spondyloarthropathy have chronic, active disease. They require long-term therapy.

The treatment is generally on the same principles as in cases of ankylosing spondylitis. The intensity of the treatment would be guided by the symptoms.

Nonsteroidal anti-inflammatory drugs are effective in most of the patients and patients maintain good function without progressive disease or clinically significant radiographic changes.

A small percentage of the patients do not respond to NSAIDs well. In these patients, treatment is similar to patients with ankylosing spondylitis, including the use of sulfasalazine, methotrexate, and TNF-alpha antagonists.

Patients are advised to maintain an active lifestyle and undertake an exercise to reduce stiffness and maintain mobility.

Knee menisci, two in number, are made of fibrocartilaginous tissue and present one each between lateral condylar articulation and medial condyles of tibia and femur. Knee meniscus or simply meniscus refers to either the lateral or medial fibrocartilaginous structure. The menisci are also known as semi-lunar cartilages because of their crescent shape. Not very long ago, […] 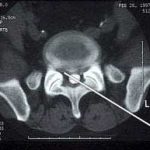 The thoracic spine is also called the dorsal spine and is constituted by the next 12 vertebrae after the cervical spine. These vertebrae are named T1 … END_OF_DOCUMENT_TOKEN_TO_BE_REPLACED