It is also known by the names of morbus Dupuytren, Viking disease or Celtic hand. It is named after surgeon Baron Guillaume Dupuytren.

Dupuytren disease is often used synonymously with Dupuytren contracture but there is difference between the two.

Dupuytren disease is a generalized disease that doesn’t only affect the palms of the hands. People with involvement may have

But the exact and clear relation between above entities is not known yet.

The ring finger and little finger are the fingers most commonly affected, but any and all digits may be involved.

Men are more affected than women. Beyond the age of 80, it equally affects males and females. Patients must have realistic expectations that surgery can relieve some disability but that it cannot cure Dupuytren disease. Discuss all potential complications of the procedure, including complex regional pain syndrome. In addition, intensive rehabilitation with an occupational therapist is necessary postoperatively for an optimal outcome.

In the normal hand, the palmar aponeurosis runs longitudinally from the wrist, crosses over the superficial transverse palmar ligament, and splits into pretendinous bands to each digit. See the image below.

In the distal palm and fingers, the following superficial fascial components are typically involved in Dupuytren disease [see the image below for details]

Pathogenesis and Cause of Dupuytren Contracture

Exact cause of Dupuytren’s contracture is not known though there are many theories. Following risk factors are suggested

Histology of the condition shows characteristics of hypertrophic scar formation.

There are three stages of Dupuytren contracture

In all stages, a core of type I collagen is surrounded by type III collagen.

Patients complain of knot or nodule or thickening on the distal palm or proximal palmar surface of the digits. The thickening may be noted long after its formation and is very slow to progress.

Ring finger is most commonly affected. Bilateral occurrences are known.

Pain is almost never a complaint unless nerve compression or tenosynovitis is present which can cause pain.

Tenosynovitis can develop and lead to pain when the nodules are large.

Flexion deformity develops with time and the patient reports an inability to straighten the fingers and perform tasks like grasping objects and typing.

A detailed history should be obtained to assess the presence of risk factors.

Examination reveals firm nodules that may be tender on palpation. The nodules are closely adherent to the skin and do not move with movement of finger [differentiation from nodule in tendon]

There is a presence of painless cords proximal to the nodules. There might be atrophic grooves or pits in the skin.

In late cases, metacrpophalangeal and proximal interphalangeal joint contractures may be present.

Other features of Dupuytren disease, as mentioned may be present.

No lab tests are required for making the diagnosis. Blood glucose levels may be done to know diabetic status.

Ultrasonography may reveal thickening of palmar fascia and nodule.

Dupuytren contracture has very slow progression and is not troublesome for years. Moreover, it may never progress in some cases.

Observation is a treatment choice in patients with nonprogressive, painless contracture and no functional impairment. These patients typically have mild disease and may be monitored every 12 months.

These measures can also be used after the surgery if the patient undergoes surgical correction of the contracture, physical therapy often is involved following the procedure

It is a protease that hydrolyzes collagen and breaks down its triple helix conformation, thus disrupting the Dupuytren cord.

It results in enzymatic disruption of the cord. Injection is indicated for Dupuytren contracture with a palpable cord.

It is effective in early disease and slows the progression. Radiotherapy is not effective in advanced disease.

5-Fluoruracil decreases collagen production by fibroblasts and inhibit fibroblast proliferation and myofibroblast differentiation. It may be useful as an adjuvant therapy to surgery.

Surgery aims at excision of diseased to prevent progression of the disease.

Surgery should be considered in patients with metacarpophalangeal contracture more 30º or if there is any contracture of the proximal interphalangeal joint.

Needle aponeurotomy new procedure which is less invasive and can be done under local anesthesia. It uses hypodermic needle to divide the diseased tissue. No incision is required. Early results appear equivalent to surgery, but long-term results are not known.

Needle fasciotomy may be an effective initial intervention in the treatment of Dupuytren contracture either alone or as a first step to subsequent.

It is sometimes used to manage more severe cases of Dupuytren contracture and it is also an outpatient procedure.

Fasciotomy is usually most successful for metacarpophalangeal flexion contracture.

Fasciectomy is a removal of fascial tissue. This could be regional (or selective) fasciectomy which removes only the fascia that is grossly affected. Extensive or radical fasciectomy is the excision of the entire palmar fascia, including tissue that appears grossly healthy.

Dermofasciectomy removes the diseased fascia and the overlying skin. It is usually reserved for patients with recurrent or severe disease.

Amputation may be recommended if digital contracture is greater than 90º or if a vascular compromise has developed.

Mallet finger is a finger deformity caused by disruption of the  extensor tendon mechanism distal to the distal interphalangeal joint caused by a bony or tendon injury It is a common injury and occurs as a workplace injury or in sports. It commonly occurs in young to middle-aged males. It is also seen in older […] 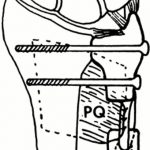