Enchondromatosis: insights on the different subtypes

Enchondromas are benign, and often asymptomatic lesions of hyaline cartilage in the metaphyses and diaphyses of the short and long tubular bones of the limbs. They are especially common in hands and feet.

They are often found as incidental lesions, usually solitary on the radiological examination for some other reason.

When there are multiple enchondromas, the condition is called enchondromatosis.

Following are the main types of enchondromatosis depending on the pattern of distribution, genetic transmission, and associations.

The mechanism of development of enchondroma is largely elusive.

Enchondromas arise in the metaphysis in close proximity to the growth plate and are thought to be the result of terminal differentiation of growth plate chondrocytes.

Some studies have reported that genes affecting heparan sulfate pathways are also affected.

Ollier disease is the most common type of enchondromatosis. It was first detailed in 1889.

It is non-hereditary and is characterized by the presence of multiple enchondromas with asymmetric distribution.

Ollier disease is encountered early in childhood and affects both genders equally. Few cases of familial occurrence have been reported.

Often the lesions involve one side of the skeleton. It is most common in short tubular bones of hands and feet followed by long bones like humerus and femur. It is known to affect axial skeleton less commonly but the skull and vertebral bodies are very rarely involved.

Malignant transformation is estimated to occur in 5–50% of the patients. It often occurs in long tubular and flat bones while this is far less common in the small bones of hands and feet.

Intracranial tumors of glial origin are other associations with Ollier disease.

Thus, PTH1R mutations may contribute to the disease in a small subset of Ollier patients but are probably not causative for the disease.

Maffucci’s syndrome is enchondromatosis identical to that of Ollier’s disease coexists with extraskeletal, predominantly soft tissue angiomatosis typically involving viscera, such as the lungs and liver.

It is rarer than Ollier disease.

Often the skeleton lesions manifest earlier and the disease initially may be labeled as  Ollier’s disease. Later, vascular lesions may develop.

Apart from hemangiomas, aneurysms, lymphedema, and lymphangiomas may occur. Nodular goiter and adrenal insufficiency malignancy in Maffucci’s syndrome can be associated.

The risk of malignant transformation is even higher than that in Ollier’s disease. Intracranial tumors may be associated

Interestingly, the enchondromas mainly involve the iliac crests and metaphyses of the long bones of the lower extremities whereas the osteochondroma-like lesions are mainly located in hands and feet.

The syndrome can present in early childhood.

The usual osteochondromas point away from joint but osteochondroma-like lesions in the metachondromatosis point towards the joint.

These lesions are not associated with bony deformities.

The disease is extremely rare and transmitted in autosomal dominant fashion.

There is also an autosomal dominant inheritance pattern that has been reported for this disease.

It is a non-hereditary disorder characterized by spondyloenchondromatosis and spinal malformation.

Presence of irregular vertebral anomalies differentiates dysspondyloenchondromatosis from other enchondromatosis with spinal involvement. The disorder manifests itself at birth.

Malignant transformation has not been reported.

It has symmetrically distributed multiple enchondromas with marked involvement of metacarpals and phalanges.

Short hands and feet are seen with mild platyspondyly. It occurs at a very early age.

Mode of transmission is not known. 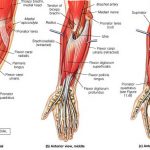 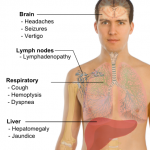 Nonunion of fracture is a delayed complication of fracture. Literally, it means the absence of a union. But by definition, a bone can be labeled as in … END_OF_DOCUMENT_TOKEN_TO_BE_REPLACED