Scheuermann disease or  Scheuermann kyphosis is a self-limiting disorder of the childhood. In this condition where the vertebrae grow unevenly resulting in the wedge-shaped vertebrae, resulting in kyphosis. Patients have an increased kyphosis in the thoracic or thoracolumbar spine with associated backache and localized changes in the vertebral bodies.

Typically, the kyphosis is more pronounced in the thoracic spine.

The condition is also known as juvenile kyphosis.

The event leading to deformity is osteochondrosis of the secondary ossification centers of the vertebral bodies involving lower dorsal and upper lumbar vertebrae.

Exact cause and mechanism is not known.

There seems to be a hereditary pattern but the exact path is not understood yet. Scheuermann’s disease is thought to affect  0.4-8% people.

The disease affects boys more than girls. The most common age of presentation is 13-16 years.

Deformity or poor posture is the chief complaint. Pain is not a major complaint but can occur in few patients and is aggravated by activity when present.

The patient generally has an obvious kyphosis that worsens on bending forward and there is a decreased flexibility of the spine. Increased lumbar lordosis and hamstring tightness may be noted.

Apart from kyphotic deformity, Scheuermann kyphosis is notorious for causing lower and mid-level back pain, which can be severe and disabling.

The sufferer may feel pain at the apex of the curve, which can be aggravated by physical activity and by long periods of standing or sitting; this can have a significantly detrimental effect to their lives as their level of activity is curbed by their condition and they may feel isolated or uneasy amongst their peers if they are children, depending on the level of deformity.

In addition to the pain associated with Scheuermann kyphosis, many sufferers of the disorder have loss of vertebral height, and depending on where the apex of the curve is, may have a visual ‘hunchback’ or ’round back’.

The seventh and tenth thoracic vertebrae are most commonly affected. It causes a backache and spinal curvature. In very serious cases it may cause internal problems and spinal cord damage, but these cases are extremely rare. The curvature of the back decreases the height, thus putting pressure on internal organs, wearing them out more quickly than the natural aging process; surgical procedures are almost always recommended in this case.

Scheuermann kyphosis should be differentiated from postural deformity, kyphosis due to skeletal dysplasias and ankylosing spondylitis, congenital kyphosis and other conditions that may cause kyphosis.

A lateral x-ray of the spine would typically demonstrate

Scheuermann kyphosis is considered to be a form of juvenile osteochondrosis of the spine. It is found mostly in teenagers and presents a significantly worse deformity than postural kyphosis. Patients suffering from Scheuermann kyphosis cannot consciously correct their posture. The apex of their curve, located in the thoracic vertebrae, is quite rigid.

Following conditions have been found in patients of this disease

There are different schools of thought in regard to the treatment of this condition.

One school says that as the condition is benign and self-limiting, therefore no treatment is required. Whereas other advocates aggressive treatment to prevent excessive deformity. Patients with mild, nonprogressive disease can be treated by reducing weight-bearing stress and avoiding strenuous activity. Exercise alone is not found to be beneficial.

Treatment of Scheuermann kyphosis is indicated

Surgery is rarely needed for Scheuermann’s disease. It may be considered for patients with severe deformities (e.g. more than 70 degrees for thoracic kyphosis) if neurological deficits are present, and occasionally if the pain is present with the deformity.

The goal of the surgery is mostly to reduce the deformity, although some feel it can lessen the pain if present. 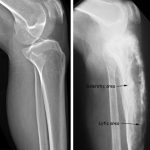 The scaphoid is most frequently fractured carpal bone. Scaphoid fractures account for up to 15% of acute wrist injuries and 50% to 80% of carpal fractures. Scaphoid fractures have been reported in people aged 10-70 years but commonly occur in young, active individuals,  peak incidence being in the second and third decades of life. Scaphoid […] 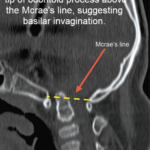 Basilar invagination is an abnormality where the skull floor is indented by the upper cervical spine. Basilar invagination is a craniocervical junction abnormality where the tip of the odontoid process projects above the foramen magnum. The tip of the dens is more cephalad [towards head] and sometimes protrudes into the opening of the foramen magnum. This […]