Split cord malformation is an uncommon congenital anomaly in which a segment of the spinal cord is divided into two parts by a fibrous or rigid bony spur.

It was previously known as diastematomyelia (diastema = a cleft, myelos = cord).

Split cord malformation can involve any part of the spinal column and sometimes involve the whole length of the canal. However, common sites of the bony spur are lower dorsal and upper lumbar regions. Rarely cases with cervical diastematomyelia have been reported. Very rarely the split cord malformation may occur without any evidence of a spur. Usually, the bony spur is attached to the dorsal surface of the vertebral body, though posterior spurs attached to hypertrophied lamina have been reported.

Split cord malformations are more common in the lower cord but can sometimes occur at multiple levels.

An associated bony, cartilaginous or fibrous spur projecting through the dura mater forwards from the neural arch is visible in 33% of cases.

Split cord malformations are divided into two types according to the presence of a dividing septum and single vs dual dural sac.

Type I has been further subdivided as follows:

Bony spur straddling the bifurcation with no space above or below the spur.

Type I is the classic diastematomyelia and is characterized by

Type II is milder than type I, and lack many of the features of latter

Patients are mildly symptomatic or may even be asymptomatic

Symptoms can range from asymptomatic ones to pain, gait disturbance, motor or sensory deficits, and autonomic dysfunction.

About 20-25% of the patients remain asymptomatic and are diagnosed on investigating for the cause of associated cutaneous malformations. This is especially true with mild type II.

Patients with diastematomyelia also frequently have other associated anomalies including:

The presence of an extra echogenic focus in the midline between the fetal spinal posterior elements suggests split cord malformation.

MRI is the modality of choice for assessing split cord malformations. It is able to demonstrate the cord and presence of hydromyelia along with associated anomalies.

CT is able to image the bones better and is complementary to MRI.

Surgery is the treatment of choice wherein the bony spur should be excised microsurgically.

The basic aim is to remove the bony or fibrous spur, division of the thick filum terminale and detethering of the cord by removal of any associated lipomas.

Low lying conus should also be addressed along with the excision of bony sp. Overall results show improvement in 40% and stable condition in more than 50% of the cases. Failure of improvement or deterioration is mostly due to incomplete removal of the bony septum.

Spinal tumor syndrome is not a condition in itself. It is a clinical label for the patient’s condition with many differentials in the offering. Most often, the term is used in cases of spine tuberculosis where there is no apparent osseous lesion. To understand spinal tumor syndrome one must first know about the typical presentation […] 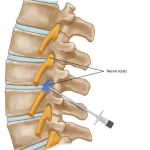