A neuron is a nerve cell. A motor neuron is nerve cell that controls movements of the muscle.

Both of these neurons when injured, present with their own set of clinical signs.

By looking at those signs, one can conclude the site of injury and reach at the diagnosis.

Suppose a person presents with weakness of upper limb.

If the lesion is in upper motor neurons [as in stroke], the cluster of signs would be different from if the weakness is due to injury to peripheral neurons such as in brachial plexus injury.

The gray matter contains neuron-bodies in brain whereas white matter that form tracts and commissures.

This allows for efferent motor as well as afferent sensory signals and stimuli.

The primary motor cortex or precentral gyrus, is one of the most important areas in the frontal lobe.

The fibers  decussate (intersect) within the lower medulla oblongata of brainstem to form the lateral corticospinal and the fibers that do not decussate pass through the medulla to form anterior corticospinal tracts.

The major function of this pathway is fine voluntary motor control of the limbs and control of body postures.

Some fibers from the motor cortex go to several nuclei in the pons and medulla oblongata and are called corticobulbar tracts. These are involved in control of facial and jaw musculature, swallowing and tongue movements.

The pyramidal tract is name given to both the corticospinal and corticobulbar tracts.

[ The pyramidal tracts are named because  when descending from the internal capsule to the brain stem, converge to a point from multiple directions giving the impression of inverted pyramidal bumps on either side of the medulla of the brain.]

The upper motor neuron descends in the spinal cord to the level of the appropriate spinal nerve root.

At this point, the upper motor neuron synapses with the lower motor neuron, each of whose axons innervate a fiber of skeletal muscle.

Anterior grey column or anterior horn of the spine harbors the motor neurons. It is also called ventral horn.

For example, at spinal segment D4 level, there would be

All the lesions of brain lead to upper motor neuron signs. Injury of upper motor neurons is common because of the large amount of cortex occupied by the motor areas, and because motor pathways extend all the way from the cerebral cortex to the lower end of the spinal cord.

In case of spinal cord insult, the level of injury determines the type of lesions.

At the level of injury, the signs would be that of lower motor neuron.

This clinical picture entails a characteristic set of motor deficits.

In acute injury, the muscles supplied becomes flaccid especially in arms and legs. All reflex activity on the affected side is abolished

It reflects the decreased activity of spinal circuits because of sudden deprivation of input from cortex and brainstem.

After spinal shock is over, the spinal circuits regain much of function for reasons that are not fully understood, eventually leading to following signs

When sole of the foot is stroked in a normal adult, the response is  is flexion of the big toe, and often the other toes. It is called a flexor response.

It must be noted that in spite of increased muscle tone, the strength is decreased, making muscles actually weaker.

This kind of paralysis is called spastic paralysis.

The level of injury also determines the severity of the spasticity.

There is a decreased vigor and increased threshold of superficial reflexes like the corneal reflex, superficial abdominal reflex or cremasteric reflex in males. The mechanism is not known and these should not be confused with stretch reflexes which are hyperactive.

Loss of the ability to perform fine movements

The ability to execute fine movements such as independent movements of the fingers is lost. AS upper limb is more concerned with finer movements, the disability is more pronounced in upper limbs.

When patient is asked to  stand with eyes closed and arms held straight out and hands supinated, the patient is not able to maintain thisposition. Their occurs pronation and downward drift besides other issues like standing problems

One major characteristic of a lower motor neuron lesion is flaccid paralysis – paralysis accompanied by loss of muscle tone.

In addition there would be a loss of reflexes (areflexia) due to interruption of the efferent (motor) limb of the sensory motor reflex arcs.

This is a late effect where wasting of muscle is seen. The limb appears thinner due to wasting. The wasting is affected by denervation.

Fibrillations are spontaneous twitches in the muscle fibers due to change in the excitability of denervated muscle fibers.

Fibrillations are result of abnormal activity of injured ? motor neurons in the case of fasciculations.

These spontaneous contractions can be readily recognized in an electromyogram, which is a helpful clinical tool.

These are depicted in following table 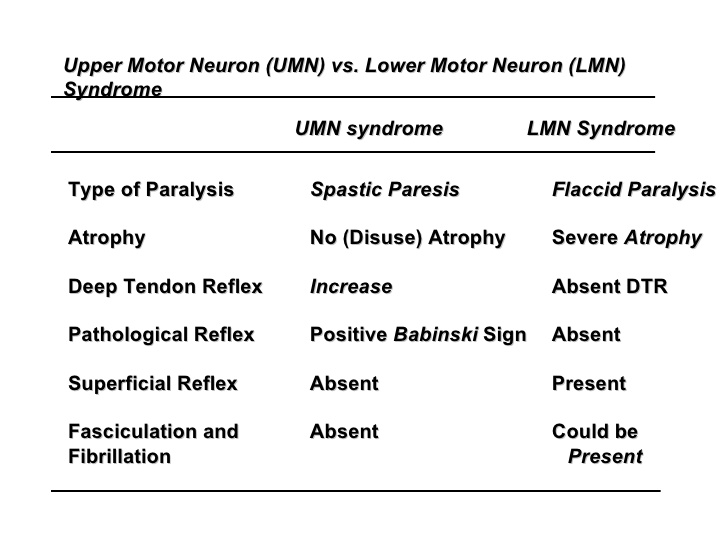 Knowing these differences is of utmost imprtance in the clinical examination. 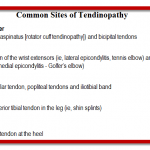 RICE stands for Rest, Ice, Compression and Elevation. These four indicates measures taken in the acute setting of injury. The purpose of RICE therapy is to reduce pain, bleeding and ultimately swelling. Too much swelling interferes with healing [Body has to work to reduce swelling in addition to the original healing process], can lead to […]

Skin traction is a type of traction that transmits the force via skin. A traction is a directional pull on the trunk or on an extremity. Its applications include immobilization and reduction of fractures, correction of deformities, and elevation of extremities for the management of soft tissue injuries and burns. It is accomplished by attaching […]