True and apparent leg length refer to limb lengths in absolute terms and in compensated forms. The limb length measurement is used to find leg length discrepancy if any.

When there is a shortening of the limb, the body compensates by tilting the pelvis down, equinus position of the foot and flexion of the opposite lower limb at the hip and knee.

True length is the measurement taken from the anterior superior iliac spine to the tip of medial malleolus while both lower limbs are in identical positions and the pelvis is square. Please note that identical position of the lower limb is and pelvis squaring is very important because the upper reference point ASIS [anterior superior iliac spine] is outside the limb and any change in the position can affect the length.

Actual true limb length should be measured from mid of head of the femur to medial malleolus but lack of reference point makes us select anterosuperior iliac spine, an easy to locate reference point.

In nutshell, the deformity is left as such and limb length is measured from a common point such as xiphisternum or umbilicus.

For finding the apparent and true shortening, both the limbs are measured separately and the difference of the measurements is calculated. Apparent shortening means the difference between apparent leg lengths of two limbs.

Apparent shortening signifies the effect of deformity on the true shortening.

The shortening has a better term for it – leg length discrepancy but for the article, we would continue with the term.

How to Examine Leg Shortening?

It uses the block adjustment method in the standing weight-bearing position. Usually, the patient compensates for shortening by abducting the leg. Correct the deformity first while keeping the trunk erect.

Correction of the deformity is suggested by iliac spines being at the same level.

As soon as both ASIS are level insert wooden blocks beneath the affected foot so as to keep up that level. The height of the wooden block required is the limb length disparity.

The pelvis is should be square to the table. The legs should be put in equivalent positions if possible.

In case of few deformities like pelvic tilting due to an adduction contraction of the hip, it will not be possible to do this.

In such cases, the pelvis is squared up and the limb length from ASIS to the tip of the medial malleolus is measured in the deformed position of the limb.

Now when the opposite limb is being measured for comparison it is necessary that it be placed in the position as that of the affected limb.

For better results, the landmarks should be marked before the measurement.

Abduction/Adduction Contracture of the Hip

When hip gets fixed in abduction, the pelvis is dipped towards the affected side to align the leg. This makes the normal leg appears shortened and the affected leg lengthened.

The opposite occurs with an adduction deformity.T

How to check for deformity?

Now, if there is a fixed deformity, either adduction or abduction, you cannot square the pelvis by moving the affected limb. Therefore the rule is to obtain an accurate comparison of their true length by surface measurement the two limbs must be placed in comparable positions relative to the pelvis.

[This only becomes necessary as our upper reference point is external. If we could measure somehow from the head of the femur, we would not need the squaring. Following diagram would explain this.

Thus if one limb is adducted and cannot be brought out to the neutral position, the other limb must be adducted through a corresponding angle by crossing it over the first limb before the measurements are taken.

This maneuver makes both limbs in comparable positions and the values arrived at would remove any fallacy.

Therefore, in  adduction deformity  – adduct the other limb through the same degree

Where is the Shortening?

After shortening has been found in the affected limb, the next question to be answered is the location of shortening.

Is it femoral or tibial?

Femoral or tibia origin can be determined by measuring thigh lengths and lower leg lengths individually and compared to the opposite side.

It is a gross test to find out if the shortening is in the femur or tibia.

The patient is supine with the hips flexed to 45º and the knees flexed up to 90º. Place the malleoli together(the test is inaccurate if you are unable to do so).  Assess the position of the knees.

However, same is not true for femur because of its deep-seated anatomy in the hip region.

Shortening above the trochanter may be caused by the destruction of the femoral head or acetabulum or both, a dislocated hip, coxa-vara deformity of a malunited intertrochanteric fracture.

Various tests and measurements can help to answer these questions.

Bryant triangle is not helpful in bilateral pathologies..

Nelaton’s line connects the anterior superior iliac spine and ischial tuberosity. In cases of supra-trochanteric shortening, the trochanter will be proximal to this line. 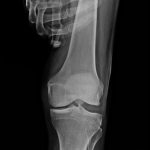 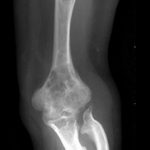