Arthrogryposis multiplex congenita is a congenital deformity affecting the extremities, characterized by marked muscular wasting the loss of mass, increased fibrous tissue around the joints, and therefore disturbance of mobility and various characteristic deformities.

Bone changes are usually secondary to the overlying soft tissue changes, as well as to the changes which have taken place within the joint.

In its usual form, there is unilateral or bilateral club foot and club hand, and these constitute the most obvious of the deformities with the rigidity of the parts, it beings impossible often to obtain any degree of movement at the affected joints.

When the condition affects the lower limbs, there are also present contractures of the knee and the hip which are often the site of a congenital dislocation

Current use of the term signifies a heterogeneous group of disorders that all include the common feature of multiple congenital joint contractures.

It must be noted that arthrogryposis as a physical sign is present in many other conditions as well.

Amyoplasia is the most common type of arthrogryposis.

Decreased fetal movements or fetal akinesis has been suggested to be the major contributory cause. The decrease in activity could be due to fetal abnormalities or maternal disorders like.

Motion is essential for the normal development of joints and their contiguous structures; lack of fetal movement causes extra connective tissue to develop around the joint resulting in fixation of the joint.

Arthrogryposis is detectable at birth or in utero using ultrasonography Involved extremities are fusiform or cylindrical in shape, with thin subcutaneous tissue and absent skin creases.

Deformities are usually symmetric, and severity increases distally. Thus in a given limb, the hands, and feet the most deformed. Joints are rigid and joints like hips and knee may be dislocated.

Limb atrophy is seen and muscles or muscle groups may be absent.

The sensation is usually intact, although deep tendon reflexes may be diminished or absent.

The range of motion in the jaw is frequently limited.

Contractures could be intrinsic which are frequently associated with polyhydramnios, symmetric and accompanied by taut skin, pterygia across joints, and absent flexion creases.

Deformities and malformations as noted before can be associated.

Lab tests are not useful in diagnosing arthrogryposis.

X-rays are done to evaluate skeletal and joint abnormalities:

Ultrasonography evaluates the CNS anomalies, visceral anomalies and establishes potential muscle tissue. CT and MRI do a better job though.

However, ultrasound is good in the identification of multiple contractures with ultrasound.

Ophthalmologic evaluation is done for opacity and retinal degeneration.

Recurrence of deformities following stretching is common, and surgery is often indicated.

Feeding assistance and intubation is needed in patients with severe trismus.

Late manipulation is of little value.

The perioperative management of these patients is difficult due to various issues.

For limbs, soft-tissue surgery should be performed early. Osteotomies should be done after growth is completed.

The goal of treatment is a plantigrade foot.

The most common deformity is a rigid talipes equinovarus deformity.

The patient needs an extensive medial and lateral release and bony procedures at a later stage. In skeletally advanced patients, triple arthrodesis may be required.

The goal of treatment is an extended knee for ambulation. The release of contractures and osteotomies may be needed.

Hip surgery should be done after foot and knee surgery. Unilateral hip dislocation requires reduction but in bilateral affliction, the reduction is not done.

Scoliosis greater than 35° should be treated with spinal fusion and instrumentation.

Ventilator dependence in the neonatal period is associated with a poor prognosis. Prognosis also depends on natural history and the patient’s response to therapy.

Most children with normal intelligence can have independent, productive lives. However, many remain partially dependent on others. 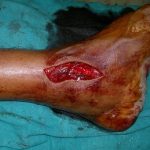