A plaster cast is given for the treatment of fractures and other orthopedic ailments. Though a very safe mode of treatment, complications of plaster cast may occur.

The main complications of plaster cast are stiff joints, muscle wasting, and impaired circulation. Physiotherapy and good nursing can help reduce these complications and speed the final recovery.

Complications of plaster cast can be divided into

Local complications of the cast can occur immediately or after a delay. These are further classified as immediate and delayed.

The most serious is deep venous thrombosis leading to pulmonary embolism. This is seen in casts applied to lower limbs. Pain in the calf is an important sign and if patient has pain after the cast is applied, irrespective of the duration since which cast is applied, medical consultation should be sought.

Good nursing and diet with regular exercises of the affected limb can prevent many of these complications.

A patient might be allergic to the material of cast, the preservatives and other substances in the cast. It is not that common. Allergies as complications of plaster cast are more common with synthetic cast materials.

If the limb is allowed to move while the plaster is setting, a ridge forms in the plaster, creating a pres­sure point on the underlying skin.

Such a ridge commonly forms in the dorsum of the ankle, the popliteal fossa, and the cubital fossa.

Pressure points may also be created by denting caused by the operator’s fin­gers  while the cast is being applied.

The pressure points cause pain or burning sensation and these must be taken seriously. In most of these cases, the cast needs to be opened to inspect painful areas.

Rarely, very hot water used to wet the plaster rolls can cause the burn.

A plaster produces a constricting effect on the limb. Most of it is well tolerated but a moderate constriction will produce compression of the veins leading to swelling. The swelling against the unyielding cast leads to discomfort or pain, and blue color in the skin and under the nails. It is quite a common complication of plaster cast.

Swelling is a natural sequel to an acute injury that produces a fracture. If the extremity is placed in a cast too soon after injury, ischemic changes may result from neurovascular compromise.

A freshly fractured extremity may be splinted or placed in trac­tion until the swelling subsides.

Temporary remedies such as elevation of the limb and exercising the digits may be tried, but, if persistent, the constriction must be relieved. The cast can be bivalved, taking care not to damage the skin.

A cast when tight or internal bleed in the injury leading to an increase in swelling under the cast may compress blood supply [ Therefore, in fresh trauma, in prone areas, a splint or slab is initially applied to avoid swelling as a complication.]

A pale skin that is cool and without a palpable pulse indicates that the arterial supply is disrupted. After the pressure on the fingernail, the color does not immediately return. This is a serious complication. Medical advice must be sought immediately.

Splitting the cast may relieve the arterial compression but sometimes surgery may be necessary.

Incomplete arterial occlusion may present with pain or aching with the loss of power.

Pain has many causes. This may be due to

A persistent or intermittent acute pain should not be ignored. Medical advice must be sought.

The most common cause of sores is the pressure of the plaster on the skin due to poor cast application.

The most likely reasons for plaster sore development are:

The patient may report burning, itching or stabbing pain. It is a constant nagging pain that does not leave the patient. The patient is often able to pinpoint the sore area.

Children may have disturbed sleep and fever.

Signs that may suggest plaster sore

When any patient complains of unrelenting pain or digging sensation, the part should be examined. In most cases, it warrants the removal of the plaster.

It should not be ignored at any cost otherwise the results could be disastrous consequences.

Some authors advise cutting a window in the plaster to inspect the part. But later on, the window may further irritate due to its sharp edges. Therefore, it is better to cut the whole plaster and apply fresh in most cases.

Plaster sores are graded according to the depth of the involvement.

Grade I and II can be treated non-operatively but grade III and IV need surgical debridement and reconstructive procedures.

Because swelling occurs with most fractures especially after reduction, the technician puts padding under the cast to protect the skin. This padding gets compressed. After 48 hours when the edema is subsiding, the cast may be too loose to hold the bone ends in position against undesirable muscle action.

Such displacement may be sudden and cause pain or gradual being first noticed on the next x-ray. This complication may seriously delay healing and may produce permanent deformity.

If the limb is not properly held during the casting procedure, it could also be responsible for malpositioning.

Loss of power, tingling, and numbness distal to the cast are signs of impaired nerve function.

The nerve may be affected by

Routine testing of power and sensation will detect any defect quickly.

For relieving the pressure on the nerve, the cast needs to be removed, limb elevated and protected.

Further course depends on the extent of the nerve damage.

Breaking of the Cast

Breaking and softening of the cast occur due to many reasons

In case the break is noticed in the cast, the patient must contact the physician for repair or replacement of the cast.

In this section, we outline complications of plaster cast in different regions and with different types of the cast.

Body casts are not used as frequently now as they were used before. The most frequent complication of the cast is that it fails to fit the body and keeps on sliding down.

Due to this movement, pressure necrosis over the sacrum and under the axillae is a common complication.

Again, the cast is not used as frequently as before due to better surgical care and custom orthoses.

Pressure areas occur over the sacrum, coc­cyx, and iliac crests and around the axillae.

Paresthesia in the area of the axillae may occur.

Loss of alignment occurs over the fracture site when the cast slips down or when the patient at­tempts rotational movements of the neck.

Shoulder spica cast is essentially a body cast with the inclusion of an upper extremity. It also has the same profile of complications

Hanging cast is used to treat fractures of the humerus.

If the cast is very heavy, a distraction of fragments may occur.

The hanging cast is ineffective if the patient is allowed to lie flat in bed. The patient must be instructed to maintain a sitting position while sleeping.

in an obese patient, a hanging cast may cause skin problems in the axilla.

Other problems associated with this cast are flexion contractures of elbow and hand. Exercises after cast removal would help to overcome this problem.

Short arm cast extends from the elbow to heads of metacarpals and is prone to slide if the wrist is in the neutral position.

Hip spica cast is used in the treatment of in­juries of the femur, hip, and pelvis and includes the opposite leg to a variable extent. The treatment is used in young children only and not in adults.

The patient may be turned from side to side and from supine to prone to prevent pressure sores.

Hypercalcemia can develop in patients with Paget disease or metastatic disease during prolonged immobilization.

Long leg cast is used to treat many injuries by immobilizing in plaster the entire lower extremity from the ankle to the thigh.

Long leg cast is prone to breakage at the thigh and at the foot-ankle junction.

Pressure areas are common over the heel.

Short leg cast extends from below the knee to ball toes, the cast can impinge on the thigh on flexion of the knee.

The cast wears and softens when the patient repeatedly rests the cast on the floor with the weight of the leg pressing on the heel.

Pressure changes may occur on the skin over the patella and head of the fibula.

Pressure on the head of the fibula, if persistent may result in peroneal nerve damage.

How to Prevent the Complications of Plaster Cast

Complications of plaster cast can be reduced by taking all precautions of application of the cast, keep a vigilant eye and making sure that the patient is well instructed about the care of cast that includes 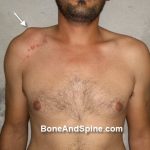