A bone island or enostosis is a common benign bone lesion. It is asymptomatic and does not require treatment. It is usually seen as an incidental finding on x-ray, computed tomogram and MRI.

A bone island is a focus of mature cortical bone within the cancellous bone.  Pelvis, femur, and other long bones are the most common sites. These are also found in ribs, the carpal and tarsal bones, and the thoracolumbar vertebral bodies though it may be found anywhere in the skeleton. Bone islands usually are 1 mm to 2 cm in diameter.

When the bone island is larger than 2 cm, they are classified as the giant bone island.

Enostosis is considered a hamartoma. Hamartoma is a is a benign tumor-like mass composed of an overgrowth of mature cells and tissues normally present in the affected part, but with disorganization and often with one element predominating.

Other hamartomas in the bone are of following types-

Mostly, the bone island is asymptomatic and the lesion is usually an incidental finding.

Osteopoikilosis is a skeletal dysplasia that manifests as multiple bone islands situated in a periarticular distribution in the epiphyses and e metaphyses of long bones, pelvis, and scapulae. The distribution is symmetrical.

On x-ray, the typical feature of the bone island is homogeneous, sclerotic focus in the cancellous bone with distinctive radiating bony streaks that blend with the trabeculae of the host bone. The long axis of a bone island typically parallels the long axis of the involved bone.

On CT scan, their appearance correlates with their plain film appearance. They are sclerotic and hyperdense foci with “thorny” radiations that blend with surrounding trabeculae.

Bone islands do not usually demonstrate increased radiotracer activity on bone scans (see the image below) in contrast to more aggressive lesions, such as metastases or primary bone tumors.

Generally speaking, findings on radiographs are considered diagnostic. In cases of large or symptomatic lesions, scintigraphy followed by biopsy may be warranted.

No treatment is required for the bony island. The lesion at the best needs to be observed. If observation is contemplated, the patient should be asked to follow up at regular intervals. 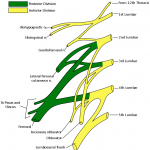 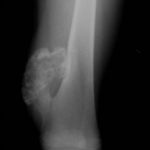