The primary function of the PCL is to prevent posterior translation of the tibia on the femur. The posterior cruciate ligament is also important in providing and controlling rotational stability to the knee.

True incidence of the injury is not known. It constitutes 5-20% of all knee ligamentous injuries.

Injuries may be isolated or combined and often go undiagnosed in the acutely injured knee. 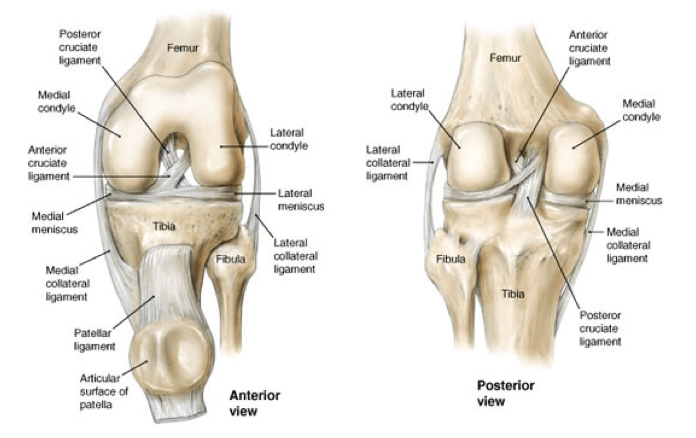 Posterior cruciate ligament an extrasynovial structure that lies behind the intra-articular portion of the knee.

It is 38 mm in length and 13 mm in diameter, thus larger than anterior cruciate ligament.

It has an anterolateral bundle that tightens in flexion. It is the strongest of the two and is most important for posterior stability at 90° of flexion.

The other bundle is posterolateral bundle which gets tightened in extension.

Thus, its function is reciprocal to the anterolateral bundle.

Blood supply to a posterior cruciate ligament is by branches of the middle geniculate artery and fat pad.

It also prevents hyperflexion/sliding. Isolated injuries are known to cause the greatest instability at 90° of flexion.

Most of the PCL injuries occur by a direct blow to direct blow to proximal tibia with a flexed knee as in dashboard injury, during a football tackle.

Both these examples result in a posteriorly directed force and a varus hyperextension force, leading to a posterolateral cruciate ligament injury and posterolateral capsular ruptures.

The injury may also result from noncontact hyperflexion with a plantar-flexed foot. Hyperextension injury is also known.

The injuries can occur in isolation but may be associated with posterolateral corner (PLC) injuries, multiligamentous knee injuries and knee dislocation

A deficient chronic posterior cruciate ligament leads to increased contact pressures in the patellofemoral and medial compartments of the knee due to varus alignment.

A patient can present as acute or chronic injury.

Both have different presentations.

In an isolated acute posterior cruciate ligament injury, the symptoms will often be vague and minimal. The patient may or may not complain of pain. There is hardly any swelling, instability, and decrease in range of motion.

The gait pattern would also be normal.

When the injury is in combination with other ligamentous injuries, there would be variable swelling and in the knee. The patient may complain of knee instability and stiffness of the knee.

In chronic presentation, a history of injury may or may not be available.

Vague discomfort of the knee is a common presentation especially during weight bearing in flexion such as ascending or descending stairs or squatting.

Discomfort may be experienced with the following positions or activities:

Long walks may cause pain/discomfort of the knee. There could be a sense of instability especially when walking on an uneven surface.

Swelling and stiffness depend on the degree of associated chondral damage.

This test is done to check laxity in response to varus valgus forces.

The comparison should be made to the opposite side.

But laxity at 30° alone indicates Medial or lateral collateral ligament injury of only.

The basis of the test is that the medial tibial plateau of a normal knee at rest is 10 mm anterior to the medial femoral condyle. A posteriorly-directed tibial step-off indicates a positive sign

The patient lies supine with hips and knees flexed to 90°, the examiner supports ankles and observes for a posterior shift of the tibia as compared to the uninvolved knee. In such a position, gravity pulls posteriorly on the tibia, and in the case of PCL disruption, the tibia falls even or behind the femoral condyles. The comparison should be made to the opposite knee.

Posterior sag sign can be observed in extension too.

With the patient in supine, the examiner supports both of the patient’s heels simultaneously with legs in full extension.

A patient with positive posterior tibial sag may also have false-positive Lachman and anterior drawer tests.

The patient is placed supine with the knee flexed to 90 degrees and the foot placed flat on the examining table.

[In intact PCL, in this position with the quadriceps relaxed, the tibia is 10 mm anterior to the femoral condyles.

The gravity pulls the tibia even or behind the femoral condyles when quadriceps relaxed.]

The examiner restrains the ankle from moving, and the patient is asked to contract the quadriceps.

It is the most accurate test for diagnosis of posterior cruciate ligament injury.

The patient is placed supine with both knees flexed to 90° and the feet in neutral rotation placed flat on the table. The normal tibial plateau in this position is about 10 mm anterior to the femoral condyles.

The examiner imparts a posterior force to the proximal tibia, and if the tibial displacement is noted and compared for side to side asymmetry.

This test is also used to grade the injury. [see classification]

By rotating the foot, the posterior drawer test can test other structures too.

Assessment of the posterolateral corner

Assessment of PLC is important as injury to PLC combined with PCL has a worse prognosis than PCL alone.

The reverse Pivot shift test begins with patient supine with the knee in 90 degrees of flexion.

Valgus stress is then applied to the knee with an external rotation force and the knee is brought into full extension from the previous flexion.

This maneuver would make tibia reduce from the posterior subluxed position at about 20 degrees of flexion, as it moves anteriorly, felt as a clunk.

The reverse Pivot shift test helps to diagnose acute or chronic posterolateral instability of the knee.

Posterolateral Drawer Test in 90° of Flexion

The examiner performs a posterior drawer test. If the posterolateral structures are injured, the lateral tibial plateau rotates posteriorly as the posterior force is applied.

The test is done similar to the posterior sag sign, except the examiner notices significant subluxation of the lateral tibial plateau.

This test is done in prone or supine position. The external rotation at the knee joint is noted while the knees are at 30° and 90° of flexion by measuring the foot-thigh angle.

In the prone position, the clinician flexes the patient knees to 30° and places both hands on the feet of the patient, cupping his heels. A maximal external rotation force is then applied, and the foot-thigh angle is measured and compared with the other side. The knees are then flexed to 90°, and again an external rotation force is applied and the foot-thigh angle is measured again

In the other method, the knee is flexed over the side of the bed. The thigh is stabilized and external rotation force is applied.

The measurement is compared with the uninjured knee.

X-rays help to rule out bony lesions but are normal in most of the cases of acute injuries.

In chronic injuries, medial joint arthrosis or patellofemoral arthrosis may be seen.

Lateral stress view of the knee is fast becoming an easy method to diagnose and quantify posterior cruciate ligament injuries.

For this x-ray, stress is applied to the anterior tibia with the knee flexed to 70°. X-rays are taken for both the knees. Asymmetric posterior tibial displacement indicates PCL injury.

MRI helps identify and confirm the location of the lesion. It also identifies occult osteochondral lesion/fractures and meniscal lesions.

It can visualize completeness of the tear and MRI is used to identify whether the tear is complete or incomplete and whether the PCL injury is isolated or associated with injury to other structures.

The sensitivity and specificity of MRI in acute PCL injury is high.

MRI may be normal in grade I and II tears.

It must be noted that many isolated posterior cruciate ligament injuries are missed at the time of initial injury especially the isolated ones as the patient does not seek medical attention immediately and does not remember the initial mode of injury and signs present are minimum/equivocal.

In such situations, MRI is the best method for evaluation of the injury.

An arteriogram should be performed in case of vascular injury.

The test is considered positive if it is easy to pass the arthroscope between the medial femoral condyle and the PCL.

It is indicated in isolated Grade I and II injuries. Some grade III can be considered as well.

Electrical stimulation and cold whirlpool may be used to control swelling and inflammation.

Patients with grade I and grade II injuries can bear weight as tolerated immediately with or without support, varying from individual to individual.

Axillary crutches and a long leg brace are recommended for grade III injuries and with another associated ligamentous laxity (ie, posterolateral corner injury) or intra-articular damage.

Details of rehabilitation are given below.

Light jogging program may be initiated.

The surgical treatment employed would depend on the nature of the injury, duration since the injury and any arthritic changes.

The results of operative reconstruction are variable and sometimes not better than nonoperative treatment.

This may include repair of the ligament or fixation of the bony avulsion or reconstruction.

It is indicated in

For reconstruction, the graft is used which could be single bundle or double bundle depending on the graft used.

The reconstruction can be tibial inlay [open technique] or transtibial [arthroscopic technique].

Increase in tibial slope during osteotomy also reduces the posterior sag of the tibia.

Athletes may return to play when isokinetic and functional parameters are satisfactory..

Primary repair of midsubstance ruptures is typically not successful.

When compared to ACL, the results of PCL and residual posterior laxity often exists.

No clear difference has been found to support one reconstruction technique over the other.

Knee dislocation is a relatively rare injury, representing about 0.2% of all orthopedic injuries. Because of association with neural and vascular injury, is important to be recognized. A missed injury could lead to loss of limb. Motor vehicle collision or fall from height are usual causes. A dashboard injury resulting in axial load to the […]